Flying along the Gaviota Coast recently, we noticed this little grouping off the point at Refugio. (see above)

Zooming in for a closer look, we could see later on the ground that it was a group of kayaks apparently stationary amid the kelp. Maybe pausing on a paddle, watching marine life, or learning about sea kayaking on a calm day? 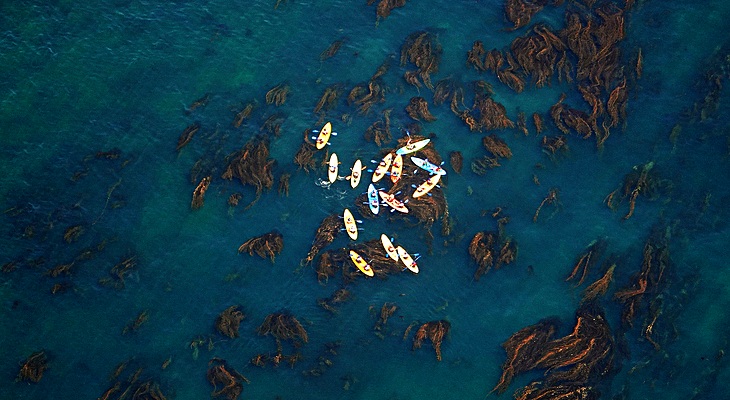 Along the coast at El Capitan, the park seemed relatively empty on a nice day. Thinking most people hadn't set up camp yet, or had gone into town for supplies or goings on about town, we noticed two groups on the beach. 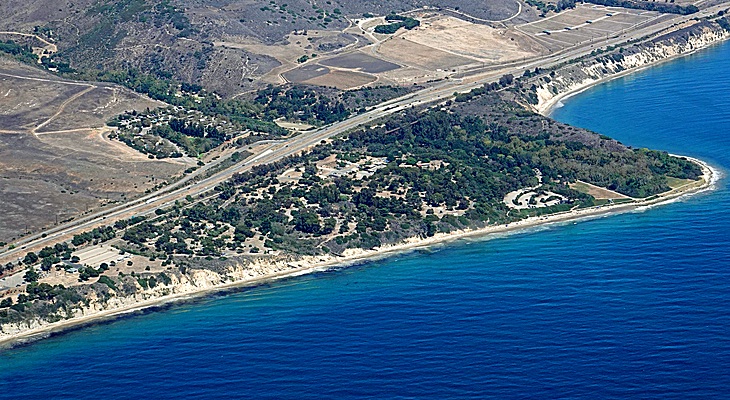 Again we zoomed in to check it out later, and it looks like two different groups out enjoying the day use area. Seeing the beach so wide open, we're tempted to drive out for some sun & surf. 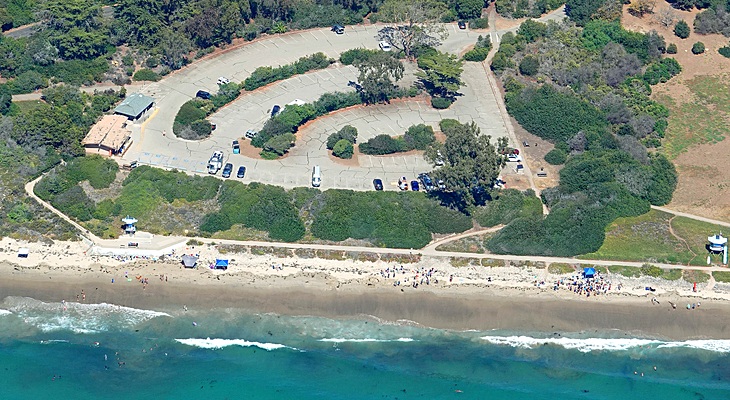 Adjacent to the South side of 101 just West of Driftwood Beach and Paradiso del Mare, there's a new bridge going in that's so solid looking it could be a CalTrans project. Is it more likely for ranch vehicle access to that apparently undeveloped small mesa between arroyos? 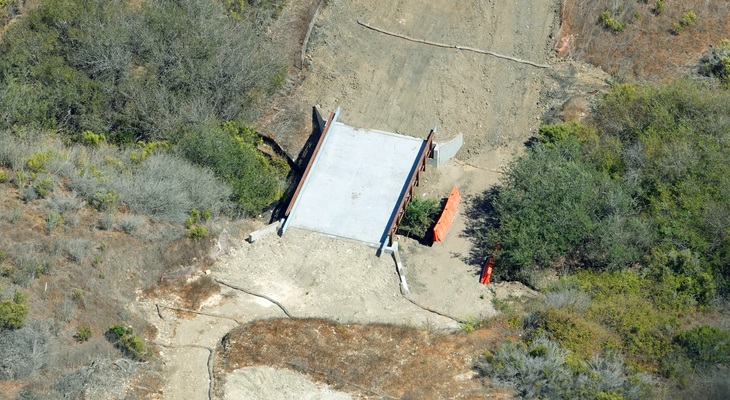 Thanks John for giving us a different perspective of the wonderful beauty of the area. Between your eyes in the sky and Robert’s boots on the ground, I am so grateful to see what’s beyond my normal view of calculations, powerpoints, excel spread sheets, and action items.

Encouraging words, Shasta. :) I hope you're still getting away from the numbers occasionally to visit magnificent Shasta and surrounds. Speaking of which, on our recent flight past there we got some discouraging pix of snowless Shasta and thick smoke from nearby fires - but it looks like I forgot to send any to Ed. Shall I?

I’m actually off to Mount Shasta next week. Summer snow coverage is is cyclical on the mountain. Fires are also the norm up there too. The area has been doing a fantastic job managing the forests to prevent catastrophic wildfire, so I thought i’d document that on my visit.

Had you made a flight on the north side of the mountain this summer you would have had fabulous views of all the glaciers. The first snow of the season fell a week ago, so the north faces will be snow covered again.

If this is a general question, then, yes, please send more pix to edhat. I and am sure others always enjoy your pictures, even as I wonder at the airplane fuel costs, environmental as well as actual. Don’t know how to balance those two, the enjoyment of seeing what I, land-based, cannot see with GHG pollution from non-essential activity.

Bird, I've lived off-grid for several years and found it pretty tough to minimize ecological footprint so I'm actually curious how you do it. Surely No to commercial or G.A. aircraft, car, manufactured bike or shoes, meat products, non-local fibers or clothing, commercial agro products, connection to grid or other services, static housing, anything transported, computer, phone or books. It's quite a long list of things we've all taken for granted, that's harming human health, despoiling nature, supporting mass extinction, and making our planet unfit for human life. Like you I worry about all this, and hope that my own strategies balance harm with sharing the beauty we can all still enjoy.

Please send Ed pix, Shasta. Your explorations of that magnificent area can bring a refreshing moment to readers.

I’ll do that John. We spent two weeks in Shasta in August first with family then with dear SB friends. We took them to many beautiful places there. I have lots of photos to turn into posts here.

Anyone know more about the bridge? It's not on gMaps yet, and is apparently not yet completed. Apparently adjacent to the North of and replacing the old one at 34.4388, -119.9384 on gMaps. The old one looks washed out on the West bank in the gMaps sat view, but no bridge at all on the gMaps "globe" sat view - so maybe the one on globe view IS the new one?

Great shots John! My understanding is the bridge is required to build the couple of mcmansions that were approved for that property.

Several years ago the then owners of the old ARCO property, now known as Paradiso Del Mar, were given two building permits for McMansions. They had two years to begin the project or the permits would expire. New owners have taken over the project and the bridge is likely a construction that will keep the building permits active. Hopefully the bridge will be the only construction that happens on this extremely view sensitive property.

That bridge is a very expensive project on the new UCSB owned Las Varas Ranch.
A MUCH bigger bridge project is on the horizon. Demolishing and replacing the enormous bridge at Refugio where the 101 crosses over the canyon.

This is definitely NOT Las Varas Ranch. Sorry.

Tom's info helps with my doubt that UC had any holdings out there. It's all DP Ranch, right? I presume they also own Naples, and if not there seem to be plenty of people here who can clarify.

John, UCSB does own Las Varas Ranch, but that is further up the coast, just below El Capitan. It was donated to the university by Munger, the same Munger that wants to build the Monster dorm on campus. I'm not sure what you mean by "it's all DP Ranch".
The original DP Ranch has been subdivided up quite a bit with multiple different owners. Paradiso Del Mar is where the bridge pictured is. A woman bought it at auction recently and now it's rumored she wants to sell it. That's my understanding.

So Brad Pitt's place is beyond Las Varas, which I see tagged in gMaps out where Calle Real is shown on both sides of 101. So the bridge pictured is for access to P.Del M. and that includes property across 101 there that gMaps tags as Santa Barbara Natives at the end of Calle Real? Tom, your knowledge of the Goleta area is remarkable! Thanks again for all you share on Edhat.

Brad and Jen's love shack is in the cove between El Cap and Edwards point.
Could hang out down there before they bought it.
Brad said he hates the beach if I recall.