After much debate amongst the Ed and the dedicated staff of edhat.com, we've decided on our Caption Contest winner. While there were many formidable entries and each staffer had their favorite, we decided the winner should be a caption we could all agree on.

Without further ado, congratulations to Chevy67 for the winning caption of, "Santa Barbara housing prices are for the birds!" We don't have to explain why it works, just look at Zillow.com.

Congrats again Chevy67, you have won yourself a $25 gift card to a local establishment of your choice and a super soft and stylish edhat t-shirt. 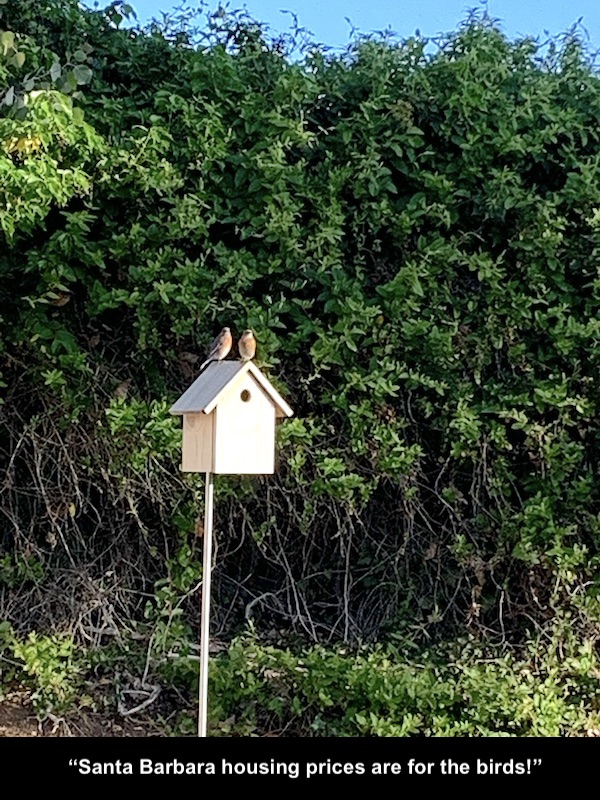 Edhat reader Dave sent us a photo of these two birds checking out the birdhouse in his backyard. Ed determined it's time to do another one of our popular Caption Contests.

Enter your caption below in the comment section. The one that makes the edhat staff laugh the loudest will win, and we may take upvotes into consideration. The best caption will win a prize! All entries must be received by Wednesday (3/23/22) at 5:00 p.m., the winner will be announced on Thursday (3/24/22).

Santa Barbara housing prices are for the birds!

Birds of a feather, let's squat together!

Do you see the side of the hole to get into the house?! Fluffy bird discrimination, we should protest by hanging out up here and decorating the roof!

"Honey, they're staring at us."

Edhat interviews a local couple who's turning to unconventional housing options in light of skyrocketing prices.

Randy and Evi Quail are back and looking to squat in another vacant home.

Yes dear, it is nice. But we can afford it only if we can put an AUD on the pole below us.

"I definitely pictured something different in my mind when I heard them talk about building more affordable housing in California."

These Air B(ird) and B(ird) rentals sure aren't worth the hype! And in "Santa Barbara" of all places! I say let's call the manager and get our seeds back!

Well, it could use some paint and a perch, and it is a bit more expensive, but it is the first one we've seen that's not a total fixer-upper.

I get the house - you get the eggs!

This is the last time we answer an ad for "Rustic, charming one bedroom located in natural setting."

We're at the peak of the housing market, right?

It’s only a studio, I thought you said it was one bedroom??!&¥

Where's the WiFi? I need to check my Tweeter account!

When I said "I want a south facing view..." Ed, I meant from the INSIDE!

It’s okay, Fred. We can be in our yard without a mask now!

Your place or mine?

First you said 40 days and nights.
Then you said get on the roof for rescue if it floods.
But you know we can fly, right?

Real estate in Santa Barbara is off of the charts. As your realtor I can only offer you a one room house, no windows and a permanently open door. Cheap at twice the price.

Gotta get away from all those eggs!

One bathroom, are you nuts, honey.

Oh look, the price is up to $5.99 a gallon. We should just fly to your mother's for Easter.

I'm telling you, the flock was supposed to gather "at the Pole's house."

“Canary Islands he says! Canary Islands! Always trying to save money! A deal on a Canary Condo! I told you I wanted to visit the Galapagos this year, but nooooo! Good job Bob. Why don’t you stick your head in there again and tell me what we’re missing! I should have married Hank! Good Lord! Why can’t you ever get it right?”

Honey the house is great, but I think there's a man living in the backyard.

I'm sorry but the rent is too high, sweetie. We are going to have to downsize!

Yes, dear, it is modest, but we'll just have to continue to carefully save our money. It just takes time to work up to Harry and Meghan's quality of abode.

2) "I disagree. We're still one anachronism short of a New Yorker cartoon."

3) "I'm too tired to make dinner, honey. But if you regurgitate the worms, I'll do the dishes."

4) "It's so demeaning when they anthropomorphize us."

Where's the woodpecker when we need him? Neither of us can fit through the front door!

"I dunno hon. Where are we gonna put the grill?"

Alright! Thanks for the prizes Ed! It's fun reading everyone's captions, a lot of clever readers on this site.