While the Blondes vs. Brunettes game is a fun event, the main goal is to fundraise for these 8,228 people in our own community. In four seasons this event has raised over $300,000 for the California Central Coast Chapter alone. If you weren't a lucky winner, consider buying a ticket or donating to this event, all the money goes back to the organization.

We had 3 edhat readers who did some excellent online sleuthing to get the correct answer of 8,228. After the edhat staff played a short football inspired game, they determined the winner is Kaseymadi! Enjoy a game of fierce flag football while also supporting a great local cause!

You've seen the purple and black shirts around town. You've heard your co-workers talk about it. You've seen the advertisements on edhat. It's finally here, the 5th annual Blondes vs Brunettes flag football game that raises money and awareness for the local chapter of the Alzheimer's Association.

This year, edhat has 2 VIP passes to give away to one lucky reader for this Saturday's game. What does the VIP pass include? Not only do you get to watch these ladies prove their athleticism, but you also receive:

We can't think of a better way to spend a summer Saturday afternoon in Santa Barbara while also supporting a local non-profit.

Here's how you can win these 2 VIP tickets. Guess the number of people living in Santa Barbara County over the age of 65 who are affected by Alzheimer's. We're basing this number on the latest data from 2015. Submit your answer below by Thursday, July 19th at noon and if you're the closest guess, you'll win these tickets! 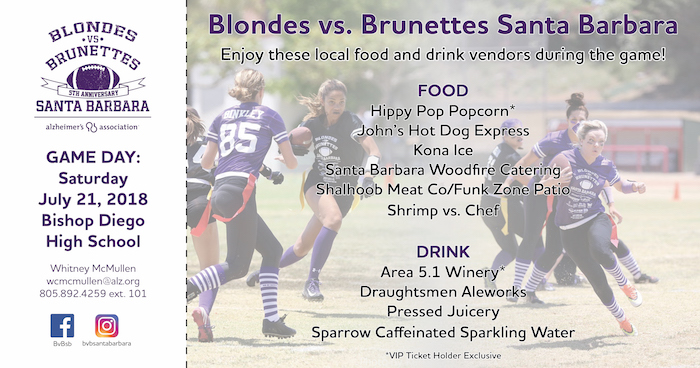 Victim to be transferred to