The local community is raising funds for the La Cumbre Jr. High School teacher who was injured during a sulfuric acid spill on Monday.

Kim Ramirez is currently receiving treatment for her injuries at the Grossman Burn Center in the Los Angeles area and is in stable condition.

Ramirez is a science teacher at the local school and she suffered significant chemical burns from a 1-quart spill of the acid in a classroom. There were no students in the classroom at the time of her injury, but officials evacuated the area to clean-up the spill. She was then rushed to Santa Barbara Cottage Hospital who decided to airlift her to the specialty burn center where she's expected to undergo multiple surgeries over the next few weeks.

Friends and family have created a GoFundMe page to raise funds to help with medical expenses and recovery efforts. As of Thursday morning, the donation page has earned more than $17,000.

Ramirez has been a teacher in the Santa Barbara area for the past four years. She married her husband, Chris Greely, in March of this year and the couple has been looking forward to their honeymoon planned to take place during summer break.

Greely released a statement Wednesday on Ramirez's condition stating their family appreciates the effort of the teacher's colleagues who rushed to her aid in diluting the acid with water from the eye hose to help minimize her injuries.

"Kim is going in for a second surgery [Thursday], which will determine the course of her remaining treatment at Grossman Burn Center. That said, she is walking around (her tiny room), laughing with friends and family, and trying to stay positive throughout this tough time. We’re strong together and only made stronger by your love and support," the GoFundMe page stated.

A donation can be made to Kim Ramiez here. 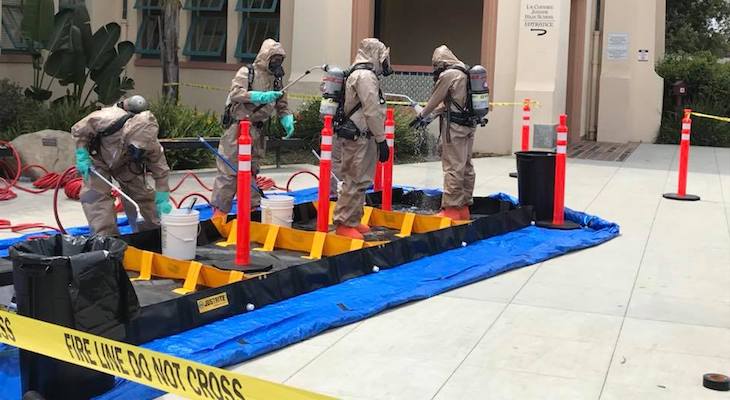 Thank God she had Friends, Family, and a Loving Husband, and sounds like she is getting better...

Why didn't the school have appropriate safety systems in place?

There are preventative systems and procedures, many prescribed by law, to mitigate the severity of accidents such as this.

GENERALTREE - why do you assume they did not?

I assumed because a witness told me - so that means I didn't assume.

GENERALTREE - if a witness told you, then why are you asking Edhat? Why not ask the witness?

Enlighten us - what safety systems weren’t in place that should have been?

SBUSD paid a consultant in 2017 to review all their hazardous material handling and storage. This is mostly like a state Ed Code requirement. OSHA also has very clear guidelines for worker safety. You would probably be surprised how many layers of government regulation already exist in this setting; including protecting first responders with proper pre-notice so they know exactly what is on site before they ever show up. They may not know what they will run into when responding to an illegal meth lab, but this is public school with known programs and known inventory of appropriate supplies. We still do not know how this incident happened, so it is premature to speculate whether protective measures were ignored or would have been futile anyway due to the nature of circumstances led to this particular incident. I suspect we will never know- her medical condition is private, and there will be many follow-up investigations before any official report can or will be issued, if ever. One could obtain information under a California Records Act request, but at this time this may be privileged and not available. However, her medical condition is solely under her own discretion to disclose, absent any later pubic trial court action, which is also unlikely as this is what district insurance is for - for accidental injuries.

How would the witness know why they didn't have the correct systems and procedures in place.

Alright what gives, I was downvoted into oblivion for asking for clarification on what safety measures weren’t in place

HORSEGIRL - I was thinking the same question, and was surprised when yours disappeared! Guess it's easier to down vote than give an explanation. Or, maybe there WERE proper safety features in place!?

Wow! This tragedy has turned into a Snark Fest. Chill people!

We have a young, dedicated teacher here that's really hurting right now and mostly likely will not be laying on a tropical beach honeymooning in the near future.

It's great that there is so much support (as there should be) but I suspect the school district will be footing the bill for any medical expenses she has for the rest of her life.

Got it - the article states the GoFundMe page was for "medical expenses and recovery efforts."

The school district provides excellent health care benefits to its full time employees. And paid medical leaves. Along with any insurance settlement claims for future consequences for what continue to be unknown injuries - a splash on the cornea, third degree burns to exposes skin surfaces requiring skin grafts or cosmetic repairs - totally unknown. It is all speculation at this point but nice to learn she was smiling and laughing with her family and friends, even if they are now required to visit her in Los Angeles - that is an extra expense. Spirits high - that is good news.

A lot of getting over medical problems has to do with attitude, it can make a big difference. Sounds like this teacher is on the right track. optimistic and not depressed. Accidents happen, unfortunately, and there is not always someone to blame.