Esteemed dictionaries have revealed their top words of the year for 2019 and some have caused quite the conversation.

The Merriam-Webster Dictionary has named "they" as their Word of the Year. "It reflects a surprising fact: even a basic term—a personal pronoun—can rise to the top of our data. Although our lookups are often driven by events in the news, the dictionary is also a primary resource for information about language itself, and the shifting use of they has been the subject of increasing study and commentary in recent years. Lookups for they increased by 313% in 2019 over the previous year," the dictionary stated. 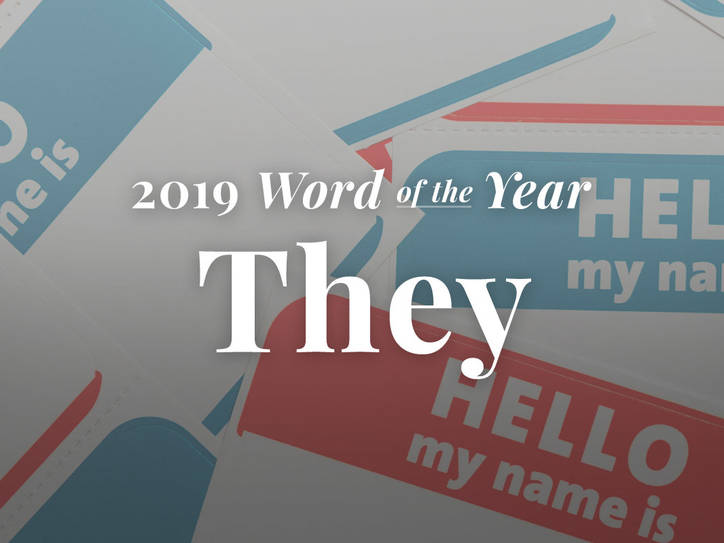 The Oxford Dictionary named "climate emergency" as their 2019 Word of the Year. Climate emergency is defined as ‘a situation in which urgent action is required to reduce or halt climate change and avoid potentially irreversible environmental damage resulting from it.’

This year there has been more awareness and discussion of climate science in what the UN Secretary-General has called ‘the defining issue of our time’. Oxford states their research reveals a demonstrable escalation in the language people are using to articulate information and ideas concerning the climate. This is most clearly encapsulated by the rise of climate emergency in 2019.

Dictionary.com announced "existential" as their word of the year. "It captures a sense of grappling with the survival—literally and figuratively—of our planet, our loved ones, our ways of life," the website states.

The word is broken into two definitions. The first is “of or relating to existence.” Entering English in the late 1600s, this existential is often used when the fact of someone or something’s being—its very existence—is at stake. An existential threat to a species, for example, puts its continued existence in real, concrete peril. The second sense of existential is “concerned with the nature of human existence as determined by the individual’s freely made choices.” First recorded by the early 1900s, this existential is related to existentialism, a philosophy that affirms our individual agency in making meaningful, authentic choices about our lives.

Cambridge Dictionary chose "upcycling" as the 2019 word of the year and is defined as the activity of making new furniture, objects, etc. out of old or used things or waste material.

The number of times upcycling has been looked up on the Cambridge Dictionary website has risen by 181 percent since December of 2011, when it was first added to the online dictionary, and searches have doubled in the last year alone.

Toggle Comments (Show)
2019 Words of the Year
So what's so hard about using "they?" Fine with me, but I'm more concerned about forgetting when to use it. Is there a hard and fast rule? If you don't know, do you say "they" or "their?" Is it that simple?
2019 Words of the Year
"They" as essentially functioning as a neo-logism to refer to one person, avoiding characterizing them as "he" or "she", should be granted the status as "Most Annoying Word Use of the Year". Emphasis on "annoying". Irrespective of one's opinion on transgenderism, transexualism,'sexual re-assignment' and various other controversial (sketchy) medical protocols, the reassignment [pun not intended but unavoidable] of a word which has for eons been used to designate a plurality into a new application to refer to a singular individual who disclaims gender - that is what Orwell warned us against: it is barbarism. Oh well, this is Santa Barbara, what can one do. To each their own, but I will plug up my earns or stop reading anyone who imposes this absurd and revolting debasement of the language onto me, without in any way been mean-spirited or disrespectful to persons presenting non-traditional gender orientation - as long as they don't impose this linguistic barbarity upon me.
2019 Words of the Year
They don't even "have" to say it. They can say whatever they want. It's just good manners, though, to address people by whatever name or title they prefer. Stubbornly calling, oh, some named Prince, by the name Ronald is anyone's right, it's just sort of rude and insulting.
2019 Words of the Year
oh no, you are so oppressed for having to say the word "they"
2019 Words of the Year
You are aware that all languages evolve over time, right? The evolution and change of language is not an indicator of moral failings, barbarism or society in decline. Otherwise you'd be saying something like "Whilom, as olde stories tellen us ther was a duc that hightte Theseus,, but you're not are you?
2019 Words of the Year
With the proliference of emojis in the past few years, I'm betting on the return of hieroglyphics as the language of the next decade. Words are simply too much work for the modern mind.
2019 Words of the Year
Not so much: "covfefe". That's just an artifact of dementia.
2019 Words of the Year
In his novel 1984, George Orwell came up with "newspeak". Words were redefined by the Party, in order to forward its ideology. The principle was that if something can't be said, it can't be thought
2019 Words of the Year
JAN 02, 2020 01:49 AM. Well . . . I am not going to use the term "Behavior Wellness" just as I never say "Domicile-challenged," "Unsheltered," "Marine Layer," "NIMBY," "June Gloom" and "Custodial Engineer," among other such blather. LGBTQIPO has its place, but I'm afraid I'd mess up the order if I tried to say it aloud. Or out loud? Whichever.
2019 Words of the Year
Suggest this instance of "lol" be replaced with "CIMB"--'Crying In My Beer' <G>
2019 Words of the Year
The Admin brass changed Dept name to behavior wellness because they are behaviorally sick themselves, undereducated, ignorants who do not know that ‘mental illness’ is a brain abnormality, dysfunction, wiring or chemical balance. With its new name, Behavior Wellness hires social workers (theorists) Vs physicians (scientist). It’s cheaper to ignore and leave on the streets our County’s mentally ill. The County staffed by ‘wellness’ fools. Shameful SB fails to adequately treat and serve mentally ill by reallocating tax funds to wellness. Lol
2019 Words of the Year
SB County changed the name of its Mental Health Department to Behavior Wellness. Not sure what the problem was with mental health. This appears to be the world we now live in. Everything is a crisis and more words become offensive to someone everyday.
2019 Words of the Year
08:42 PM I wish you were making this up.
2019 Words of the Year
Not to be outdone by George Orwell San Francisco require that criminals AND VICTIMS OF CRIMINALS must now be referred to as “justice-involved persons”, juvenile delinquents are to be called “young person with justice system involvement”, and drug addicts become a “person with a history of substance abuse.”
2019 Words of the Year
Prime examples: "alternate facts" and "fake news".
2019 Words of the Year
Language is dynamic and evolves with the times. Some people don't.
2019 Words of the Year
Climate emergency- now that is outright propaganda, whether you buy into all the climate Science (in my opinion alarmism) or not.
2019 Words of the Year
I'll go along: Looking at available scientific historical data and contemporary statistics, it should be called "Anthropocene Epoch: The beginning of the 6th Mass Extinction"
2019 Words of the Year
Your unsupported opinion does not sway the judgment of those in our world who base theirs on fact.
2019 Words of the Year
What?
Please Login or Register to comment on this.

I'll guess he forgot his

Wow! I wouldn't even lean

Trump will pardon him

Does he have a Costco card?

What about Montecito water

Well said! Have you tried

Why do extremists love Edhat