Everett, the world’s oldest snow leopard, passed away just three weeks before his 22nd birthday on Tuesday, May 21 at the Santa Barbara Zoo.

“In the last few months, we have seen a loss in body condition, deterioration of his coat, and decreased mobility. This past week, he had trouble getting up and moving around, despite an increase in medication for his osteoarthritis.  Because he was declining quickly, we felt humane euthanasia was the best welfare option for him,” said Dr. Julie Barnes, the Zoo’s Vice President of Animal Care & Health.

Everett's companion, Zoe, passed away in February. “Both Everett and Zoe lived very long and full lives and have been wonderful ambassadors for this endangered species, which faces so many challenges in the wild,” said Dr. Barnes.

Everett’s body has been sent to Midwestern University in Arizona for a study on the vascular anatomy of snow leopards. He was considered the oldest snow leopard in any zoo accredited by the Association of Zoos and Aquariums. 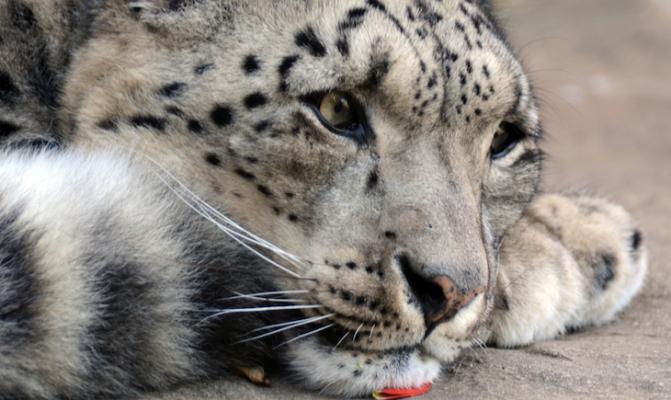 Rest in peace, sweet big kitty. You brought joy to others in your lifetime even though you were kept in a prison for most or all of your nearly 22 years. I'm glad I got to see you one last time.

Even in death he is in prison...Rest in Peace Little Guy.

You mean he didn't volunteer to spend his life in a small enclosure and then have his body sent off for dissection? I hope his immense sacrifice was worth it, and means that others of his kind might continue to live in the wild, but I doubt it.

So sad! I was just at the zoo with my family a couple weeks ago and we were really looking forward to seeing the snow leopards. Now I know why the exhibit was closed. :-( Rest in Peace, sweet Everett.

Amazing how people are still okay with the senseless incarceration of wild animals. Lack of empathy and compassion is a very, very sad thing.

I suppose it depends on whether you believe that some of the most vulnerable and endangered animals should be allowed to die from habitat loss and hunting, or if you believe that some of these animals should be kept in captivity to preserve their species from extinction. The idea being that humans don't have their act together yet and may kill these species before we figure out a better way, and perhaps if we figure it out in time, we could reintroduce these animals into their former habitats. On the other hand with climate change, many of these animals habitats may no longer even exist to reintroduce them back into if we were to be able to.

Is it more humane to kill off entire species with our own greed and stupidity outright, allowing these wild creatures to live in their habitats while they're being destroyed, or is it more humane to try and capture some and force them to live their lives in captivity? I suppose it is a matter of perspective, as well as the size and qualifications of the facility.

You might want to start first with the senseless destruction of habitat and hunting. Go work on that one. Slow population growth. Get though to uneducated people who do not care. Prevent them from killing these cats because they're afraid or feel dominant. As soon as you've got this figured out, and you can guarantee species habitat and longevity, then we can talk about zoos.

8:10 you might want to start by following your own advice and working on those issues if you feel they are important. The idea of warehousing animals in small areas relative to their natural ranges sounds good in theory, but it is very difficult to return animals to the wild once they have been raised in domesticated situations. The knowledge they need to survive in the wild cannot be passed down by the parents at that point. And that is assuming that we will come to our senses and stop overbreeding and destroying their habitat and can ever be returned to the wild. The New Yorker published a story about a Danish zoo killing and dissecting a young giraffe in public that discussed the studies that fail to demonstrate that zoos actually motivate people to work on preserving habitat, which is one the main reasons you hear about why they should exist.

Education of future generations will only help the efforts to save endangered species. There is no level of high definition video that can replace the experience of seeing and learning about wild animals in person. It is sad in many ways, yes. But when done correctly, the benefits of zoos outweigh the negatives in the grand scheme of things.

The cats were so "kitty like" in the video, like over grown house pets. They didn't look unhappy and seemed to have room to move and play in. If it is all they have ever known they don't know to miss being in the wild. I just don't have any answers to the "prison or wild" argument.

Moat zoo animal today have been born in captivity and have no contact with the wild for several generations. Considering the conditions of snow leopard preserves in China and Russia Far East, SB Zoo probably did this pair a great favor bringing them here to their exemplary and award-winning zoo operation.

Sorry to hear this. We saw Everett a few months ago and he was obviously in pain when walking. 21 is a good long life for a big cat.

Sure doesn't sound made up,

Halloween Can Be Tricky for Dogs – Here’s How to Make It a Treat!

So true, LUVADUCK. And,

No one was triggered by a

Thanks Andrew, you’re the

When two incumbents run for

Did anyone stop anyone from