An elderly snow leopard named Zoe passed away on Thursday, February 14, 2019, at the Santa Barbara Zoo. Though she was advanced in age and being treated for related ailments, her death was sudden and unexpected. A keeper in the vicinity alerted the Zoo’s veterinary team, which attempted to resuscitate the 15-year-old big cat, but were unsuccessful. 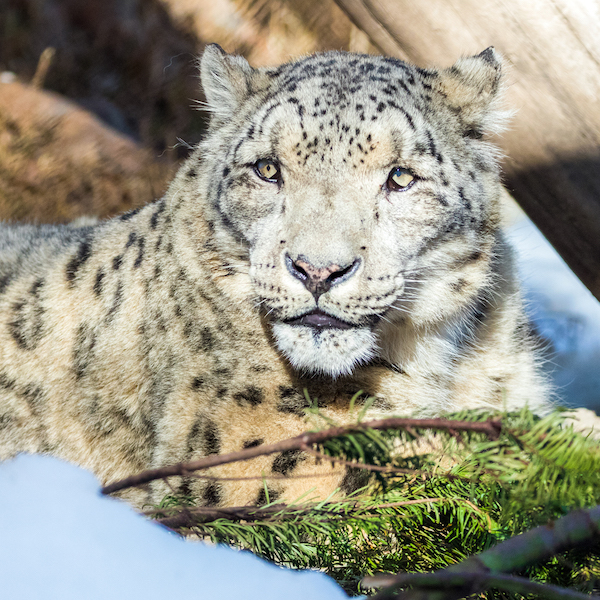 “Zoe was being treated for osteoarthritis of her hind legs, early renal failure, and hypertension, which are common in geriatric large cats,” said Dr. Julie Barnes, the Zoo’s director of animal care and health. “Given the suddenness of her death, I suspect a heart attack or a stroke.”

A necropsy was performed Friday, February 15, but revealed no specific findings to explain Zoe’s sudden death. Tissues have been submitted to a lab for analysis, which may provide more information, but the results will not be available for two to four weeks.

Zoe’s body has been sent to Midwestern University in Arizona as part of a vascular anatomy study in snow leopards, which is supported by the Association of Zoos and Aquariums’ (AZA) Species Survival plan for snow leopards. The species is highly endangered it its home range of Central Asia.

“This study will contribute to the knowledge of snow leopard anatomy which has not been documented in detail,” adds Dr. Barnes.

About Zoe and Snow Leopards at the Zoo

Zoe was born on May 18, 2003 at the Akron Zoo in Ohio. She arrived at the Santa Barbara Zoo in 2010. Everett is six years older and arrived at the Zoo in 2011 from the Lincoln Park Zoo in Chicago, Illinois.

Though Everett has a genetic disorder that made him sterile, he showed an unusual amount of interest in Zoe when she first arrived. Keepers did careful introductions, and the two became contented companions.

“In the wild, adult snow leopards are solitary unless it is mating season or a female is raising young. So it was a rare treat for our guests to witness the two snow leopards not only get along, but actually romp and snuggle together,” says Dr. Barnes.

Dr. Barnes notes that animals under human care are living longer due to the high quality of geriatric care now available. Gingerbread, an African lion, lived at the Santa Barbara Zoo for 13 of her 18 years before passing away in February 2017. Her lifelong mate Chadwick, now aged 20, currently receives special care related to age and poor vision. Zoo staff has decided to have him live out the rest of his life at the Zoo without the stress of introducing new lions. At age 21 years and seven months, Everett is currently the oldest snow leopard in any accredited AZA zoo.

“Given his age and current geriatric medical conditions, it is not in Everett’s best interest to be moved,” says Dr. Barnes. “As with Chadwick, we will continue to care for him for the rest of his life.” 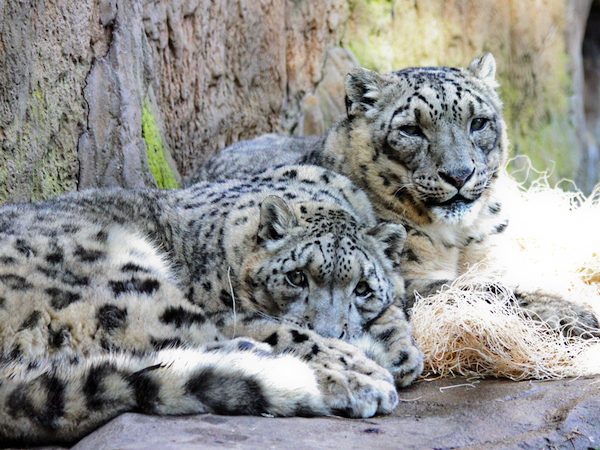 Adapted for the extreme weather, snow leopards have been viewed at elevations as high as 19,600 feet in summer. Their furry feet help them to stay on top of the snow by providing a greater surface area – like snow shoes – and their fur keeps their paws warm and dry, providing traction as well. Unlike most big cats, snow leopards don’t roar, but they do make vocalizations.

Now, more than ever, we unlimited have access to intimate HD images of wildlife in their natural habitats.
Why make them suffer in constrained, man-made enclosures just so people can gawk at them for entertainment?

People who state that zoos are helping to "save" endangered or any other designation of animal species need to read this: https://www.peta.org/features/zoo-conservation-captive-breeding/

Don't go to the zoo. Do not promote and condone animal incarceration.

I generally agree to what you're saying, however animal incarceration helps with building back populations of critically endangered species, such as the California Condor.

I was at the zoo on Monday and the remaining snow leopard was making lots of vocalizations. Now I know why he sounded so sad!

RIP Zoe, you brought years of pleasure and awareness to my kids. Thank you.