A pair of Santa Barbara High School (SBHS) students won the Congressional App Challenge by creating a program that aims to strengthen student connectedness with an anti-cyberbullying approach.

Computer Science Academy students Christian Sanchez, a senior, and Antonio Ayala, a sophomore, developed “One Connected” as a way for students to easily and safely join clubs/ organizations by browsing through the school’s Club Directory.

“One Connected” has moderated communication features that have been implemented to allow students to carry out their messages safely.

Christian presented “One Connected” to the Student UN, which is a group of all the club and program student leaders that meet regularly with the Principal.

The group’s focus this year is to increase the sense of belonging, safety, and community for all students at SBHS. A common problem for our student clubs is the lack of student engagement and communication. So, Christian and Antonio used their skills to create an application that could solve the problem.

“We are so proud of our students. Christian and Antonio not only developed a useful app for Santa Barbara High School, but they also did it while ensuring their work is inclusive for everyone,” said Principal Elise Simmons.

Last month, Congressman Salud Carbajal honored them for their achievement. They also met with the lawmaker to discuss the app’s positive impacts at school and its potential.

As part of the honor, “One Connected” is eligible to be featured in the United States Capitol Building this spring and placed on the house.gov website. 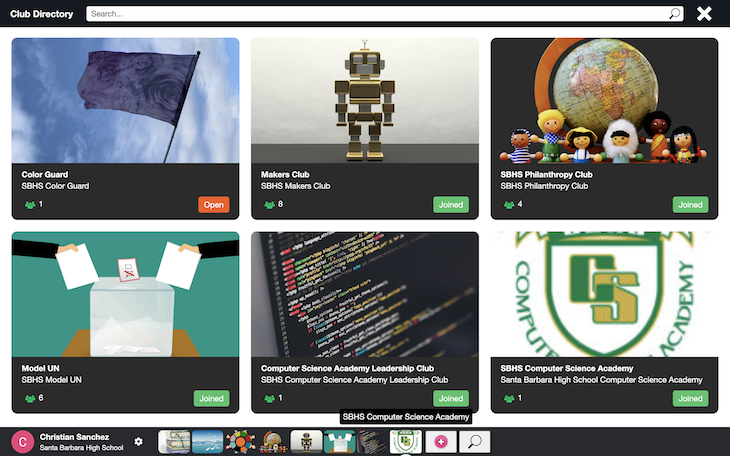 “Santa Barbara Unified wants to help our students learn skills that will help them after graduation. The work Christian and Antonio did is an example of the great resources we have available throughout the district. We hope One Connected helps bring students together at SBHS and inspires other students to learn about computer science,” said Dr. Hilda Maldonado, superintendent.

Competitors in the Congressional App Challenge must be enrolled in middle or high school. The contest started in 2015.

This is the third time SBHS Computer Science Academy students have won the Congressional App Challenge. Last year Noah and Ramon Wang won for their SB Channel Keeper website, and several years ago, a group won for an app that highlighted attractions in Santa Barbara.

Congratulations Christian and Antonio for creating something so innovative that really helps students
stay connected.

Congrats kids - awesome to see this type of accomplishment. Just be careful getting too close to Salud. One day you both will be high producers in our society - perhaps starting your own company and employing lots of people. Salud will be the first to shake your hand to appeal to voters and then tax the shXt out of you. Claiming you are privileged earners and should not be rewarded financially for your successes. Even though you donate heavily to charities and give back to your community. Yes I am being cynical - but it is what it is.

Way to go Christian and Antonio . But, I'm concerned with that "Scowler" in the second pic staring at the camera?

What was the bright object in the sky (daylight) south of the moon on Saturday?

Bob reports Santa Barbara Police are responding to the scene of a man scene carrying a gun in downtown Santa Barbara.

[Update]: One person is injured from a vehicle rollover on Highway 101 north near the Gaviota rest stop.

DignityMoves announced its partnership with the County to launch DignityNOW Santa Barbara County, an initiative to create sufficient Interim Supportive Housing for everyone experiencing unsheltered homelessness.

Bob reports a broken window vandalism in the 600 block of State Street.

[Update]: A 20-year-old man was airlifted to the hospital after falling nearly 180 feet over the side of San Marcos Road.

SpaceX Pushes to Monday for Launch of Satellites

So here’s the deal…I met a dog recently and her story is worth sharing with you.