Recently an edhat reader sent in an article by Thrillist detailing the popularity of Ranch dressing and it reminded us of the key role Santa Barbara played in America's favorite salad topper. 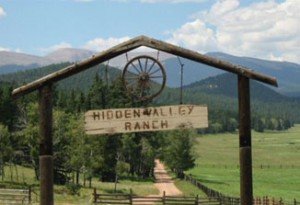 If you have a hard time eating vegetables without this flavorful sauce, you can thank its inventor Steve Henson. In the late 1940's Henson worked as a plumbing contractor started developing the idea while cooking for co-workers. Not long after, he moved with his wife Gayle to Santa Barbara where they purchased a 120-acre ranch on San Marcos Road, the former home of Sweetwater Ranch, and named it Hidden Valley Ranch.

They began taking in visitors and tourists to showcase the lovely parts of the Santa Ynez mountains and Santa Barbara countryside. As a treat, they served guests spoonfuls of Henson's buttermilk dressing made from a dry mix of garlic, onions, herbs, spices, and mayonnaise. It became a local phenomenon and the duo began selling their seasoned dry mix and finished product for customers to take home.

As the popularity and demand increased, Hidden Valley Ranch Food Products became an incorporation and in 1964 they started selling packets at local grocery store, Kelly's Corner. (Bonus points if edhat readers can identify where this store was located). A factory was opened to manufacture in large volumes and distribute nationally.

Then in 1972, the Hidden Valley Ranch brand was bought by Clorox for $8 million. Under new ownership, Ranch dressing was sold as a bottle of put together cream dressing instead of just a mix by 1983. It's fame skyrocketed from there as a popular vegetable dip to the most popular salad dressing.

Henson, who died in 2007, trademarked the “Hidden Valley Ranch Dressing” name, but failed to coin “ranch dressing," reports Thrillist. Numerous companies started to use the phrase within their marketing of flavors. In 1986, only three years after the bottled dressing launched, Doritos released its Cool Ranch flavor.

While extremely popular in the United States, Ranch dressing is virtually unknown anywhere else in the world.