The principal of Santa Ynez High School was arrested for driving under the influence last month.

Mark Swanitz, the 51-year-old principal, was arrested on October 21 after a traffic collision in Buellton, according to the California Highway Patrol (CHP).

The CHP report states another vehicle was stopped in a driveway on SR-246, west of Skytt Mesa Drive, when the driver made an unsafe turning movement directly into the path of travel of Swanitz's vehicle resulting in a non-injury collision.

During CHP's collision investigation, it was determined Swanitz was under the influence of alcohol at the time of the collision and was subsequently arrested. 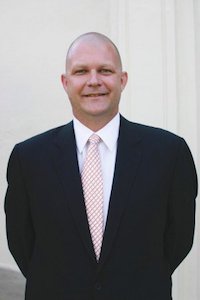 Everyone drinks and drives no one learns lessons.

Yes that is right I say it over and over again everyday I hear DUI driving hit and runs everyday no one learns lessons here is a High School principal..You think calling me a beach ball bothers me not at all fatty fatty 2x4 gimmie all you got I don't care being fat isn't against the law but driving drunk is...

What really cracks me up is the post on Facebook everyone defending his DUI Driving because he is a good guy who does a good job...We are all human after all and the other guy who was pulling out of a driveway he might be at fault too but what does his nationality have to do with the case? You condemn the casino and people of color who make mistakes but NOT THE GOOD GUYS....

This is exactly what I am talking about Roger. No one brought race (people of color) up here once. You decided it was pertinent. I never see you making comments about race when there are mug shots coming in everyday from crimes like rape, burglary, GTA, high speed chases, drunk driving with kids... Just when its a highschool teacher who was drunk and T Boned a person who was driving like an idiot sober. Seems like a fair way to cast judgment. This guy screwed up big time and should pay for it. His race has nothing to do with it. If you are so outraged by a guy that could not avoid a collision (allegedly/probably because he was drunk) why are you not ripping your hair out at every rape, murder, and robbery that happens disproportionately from the people who you feel are being stigmatized? This is what I have been told would be defined as a "microgression" if there ever was such a thing

The statement I made about Race was based on a comment I saw on Facebook making point of the nationality of the victim hit by the Drunk Driver....I was not commenting on the race of the Drunk Driver but leave it to a few cowards on the internet to call me a racist and twist things around...So what is it am I a Beach Ball or a Racist?

Damn! And I liked him too!!!! He backed me up with my oldest son (back in the day) when we were trying to preach RESPONSIBILITY AND CONSEQUENSES!!!

People my age (54) all learned how to drive drunk in high school. We were more afraid of getting the car home past curfew! Sometimes the cops would pull you over and offer to drive behind you to make sure you made it safely. Times have changed!

People who resort to name-calling aren't worth notice. Angry pre-schoolers do it; it takes neither talent nor vocabulary. Theirs runs to toilet-training epithets since unless they've been very unlucky, variances of size, race, gender and so forth haven't yet falsely been associated with value.

Roger, Defending this principal's drunk driving because he is a "good guy who does a good job" is sending the wrong message to their kids. Here in Carp we had a grammar school principal who molested young boys for quite a few years before being caught. At a gathering of parents many had the nerve to defend him because he did such a good job. Well, I'm sure the little molested boys didn't think he did a good job. He went to prison. A principal should be a good role model for young people.

I don't think Roger was defending him, he was pointing out that people on Facebook were saying that. That's what I read from his comment anyways.

DUI is never okay; there is no excuse for anyone, no matter who you are. If guilty and the conviction is upheld, he should humbly step down from his position as Principal . Regarding name-calling, we are experiencing a revival of it in our country, thanks to the example of the POTUS.

Not a fan of anyone drinking and driving. Did anyone notice that if the accident happened while he was sober the blame would have been on the other driver. It may still be... But why not get just as outraged when people drive like idiots sober. I see that everyday.

I did not call anyone a name I got called two of them though How many of you are DUI Drivers?

Your comedy schtick is

The City and the County of

Please come to our Save Modoc

Call MarVac in Goleta and see

I cannot find an electrical