The Garden Club of Santa Barbara has recently collaborated with Casa del Herrero on the renovation of the Casa’s Arizona (cactus) Garden. Thanks to funding from the club’s Civic Project Grant Program, as well as time and effort from club members, the garden is now restored, creating a beautiful, contemplative space in which to view unique cactus specimens.The Garden Club of Santa Barbara gathered for the unveiling of the newly renovated garden space on June 17, 2019, admiring the beautiful plant specimens as they strolled along the newly refurbished gravel trail. Many of the cacti, new aloe and agave were in bloom, with one bromeliad “Sapphire Tower” Puya alpestris garnering unanimous admiration for its gorgeous rare bloom of midnight blue flowers. 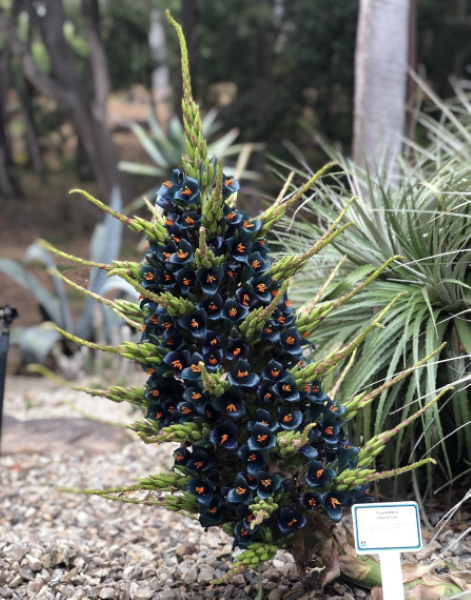 "Sapphire Tower” Puya alpestris
“I am so grateful to my co-chair Sharon Bradford, and our volunteer committee members for their hard work over the last year,” said GCSB Horticulture chair Amy Mayfield. “Historical restoration is a passion and we have thoughtfully preserved and revitalized the Arizona Garden. I was thrilled to be a part of this hands-on project in our community.”

No aspect of Casa del Herrero was reworked more vigorously than the garden spaces. The original owner, George Fox Steedman, was a perfectionist, and he made many changes to Landscape Architect Ralph Stevens’ garden designs. The result of Steedman’s intervention is an eclectic mix of Country Place Era and Moorish-inspired garden spaces. The Arizona Garden is a distinct highlight of the estate, and a spectacular stand-out for the Casa’s guided tours.

“Collaborating with the Garden Club of Santa Barbara has been such a joy,” said Casa Executive Director Jessica Tade. “I am grateful for their support, and the knowledge and expertise they brought to this project. Because of their efforts, the Arizona Garden has returned to its original splendor.”

When visitors come to Casa del Herrero, or the “House of the Blacksmith,” they are transported back to Montecito in the 1920s and 1930s – the heyday of the original owner George Fox Steedman. Designed by George Washington Smith, the Casa is one of the finest examples of Spanish Colonial Revival architecture in America. It is included on the National Register of Historic Places, and maintains National Historic Landmark status in part due to its eclectic gardens created by Ralph Stevens, Lockwood de Forest, and Francis T. Underhill.

Today, the 11-acre estate functions as a nonprofit organization with the goal of preserving the house and grounds, as well as the Steedman family’s collection of fifteenth and sixteenth-century fine and decorative art objects from the “Golden Age” of Spain, books, sketchbooks, drawings, and horticultural records. Casa del Herrero is preserved and stewarded for the benefit of the community, and can be visited by booking a tour HERE.

There are a pair of crutches

Roger... I think most of us