About 100 trucks daily, on average, are dumping Montecito mud onto Goleta Beach, where it is spread onto the beach by excavators and carried into the ocean by the next high tide.The mud is being sampled every two to three days for toxics and undesirable clay and silt content, and to date, it is meeting state standards for placement here and at Carpinteria Beach at Ash Avenue, officials say. But the ocean water continues to show high level of bacteria, including fecal bacteria. UCSB scientists are studying the DNA of bacteria in the mud and the surf zone to determine whether it comes from humans. (Photo by Melinda Burns)

As convoys of trucks continue to dump mud from the Montecito debris flow every day at Goleta Beach, the quality of both the mud and the ocean water is coming under increasing scrutiny.

A team of UCSB scientists is now studying the DNA of bacteria in the surf zone and the mud to find out whether it comes from humans, as opposed to horses, dogs or birds. Initial results may be available by the end of next week.

“I just can’t stress enough how important it is to figure out whether there’s human waste in the mud,” said Patricia Holden, a UCSB professor of environmental microbiology who is leading the DNA study. “I’m hoping we don’t find high concentrations of human fecal markers. It’s human material that is mostly likely to be harmful to people and cause disease.” 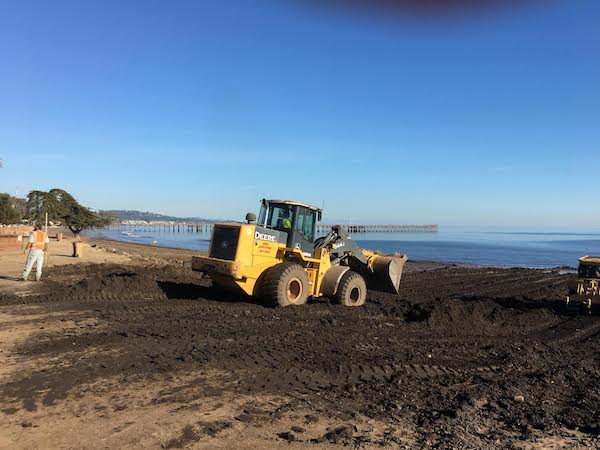 Testing on the debris flow itself by a consulting firm for the county last month detected levels of two substances that could pose a health risk to cleanup workers – fecal bacteria, potentially from untreated sewage, and chemicals found in gasoline and motor oil.

In the wake of the Jan. 9 disaster, the county is testing weekly for bacteria in ocean waters off all county beaches. The waters off Goleta Beach and Carpinteria Beach at Ash Avenue, another mud disposal site, continue to show extremely high levels of bacteria, including fecal bacteria. Santa Barbara Channelkeeper, a nonprofit group, is performing the same tests on a daily basis.

But these simpler tests don’t identify the sources of bacteria in the water. Holden estimates she’ll need $100,000 for a three-month DNA study, and she’s raised only $27,000 to date, from UCSB Associated Students.

“It’s expensive work, but it’s unequivocal to me that it has to be done,” Holden said. “This is something that takes a lot of expertise. Ideally, we’d be able to chart the course to clean water again, once the disposal stops.”

Holden said her team has been studying sources and types of fecal pollution at Goleta Beach for two years, compiling a unique database that will be useful in this emergency.

As of last week, the Central Coast Regional Water Quality Control Board, a state agency in San Luis Obispo, began requiring the county to sample the quality and size of the grains in the truckloads of mud at Goleta and Carpinteria. So far, the testing shows that only 15 percent is undesirable clay or silt – well below the standard of 25 percent that the board has used for other projects, said Phil Hammer, a senior environmental scientist for the board. The sampling will continue at least every two or three days, he said.

“Maintaining the beach habitat the way it previously was is desirable,” Hammer said. “Initially, we weren’t requiring testing because it was essentially a rescue operation. Now that we’re more in a recovery mode, it’s appropriate to look more closely at what’s being placed on the beach.” 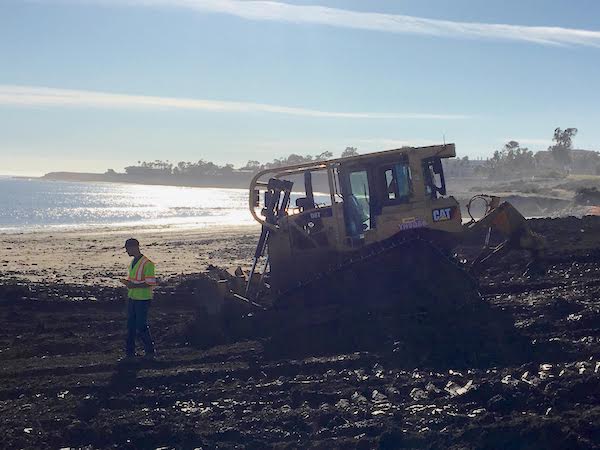 Seth Shank, a county Flood Control senior environmental planner, uses a wand monitor to check for toxics in the air at the Goleta Beach dumping site. The monitor is steadily showing zero toxics, he says. (Photo by Melinda Burns)

It’s also important to monitor the claylike material in the mud because very fine particles provide more area for viruses and bacteria to cling to, Holden said.

Finally, the board is requiring the county to sample the truckloads of mud every two or three days for toxics such as petroleum hydrocarbons, pesticides and heavy metals. Here, too, the mud is meeting board standards, Hammer said.

How much of the remaining mud – six feet high at some locations – will be left in place by Montecito property owners is anyone’s guess. It’s thick and wet and can’t go into the county’s Tajiguas Landfill on the Gaviota Coast, said Scott McGolpin, county Public Works director.

The worker picks out large debris from each load before it is spread onto the beach.

“You can’t compact it, and water mixed with trash is not a good thing,” he said. And there is not enough space for it.”

Tajiguas is scheduled to close by 2026. Two million cubic yards of mud and debris from Montecito would use up seven years’ worth of municipal dumping, McGolpin said.

Maybe some of the property owners who were not affected by the debris flow could each accept five or six truckloads and work it into their landscaping, he said.

“That’s the ultimate hope, that we could get people to reuse this dirt and accept higher elevations, rather than truck it off,” McGolpin said. “To move it to where?”

Not a good idea to throw a

The High Cost of California

My math is off today. You

What tests are approved by