Eternal Flame on UCSB campus a gift from the Class of 1968 in honor of Dr. Martin Luther King, Jr. (Photo by Carlos Nash)

“Walk With Us” was a perfect beginning to the Martin Luther King, Jr. weekend. Starting at UCSB’s Eternal Flame were about 100 people, mostly students, gathered to hear some compelling speakers.

M.C. Chris Hudley did the introductions after the student poetry winner Kundai Chikowera from Dos Pueblos opened the ceremony.  The Hudley’s were the key people on campus who organized this portion of the larger weekend of events organized by the Martin Luther King, Jr. Committee of Santa Barbara. Led by Board President E. Onja Brown who thanked everyone for being there and noted her delight in seeing so many students. Inviting them to the Monday gathering, march and culminating program at the Arlington where the keynote speaker is of very special significance.  Dr. James Lawson worked alongside Dr. King in creating the non-violent movement and was a Freedom Rider.  All the events this weekend are free.

Listening to second-year doctoral student from the Linguistics Department deandre miles-hercules, who spoke with such conviction about their personal story, I was hooked. deandre who identifies as a black trans woman stated that like MLK they believe education has a “radical potential for transformation.” They implored, “to everyone who has a hand in, or touches education to be a friend to equity and justice. I think that counts for administrators, faculty members and especially students to really play that role.” 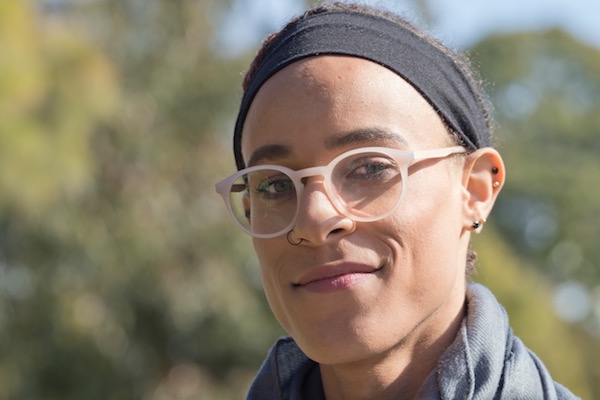 deandre is a strong role model the undergraduates are lucky to have on campus. They repeated three times the life span of someone like them is 35 years old. Then wondered what they were doing to change. It was a moment of truth. Strong words delivered in a soft yet commanding voice. They used no microphone and I could hear every word, even when deandre turned away from me. Their every word was a drop of light for me. Born to lead I thought.

Further impressed by Jamaal Muwwakkil, in his second year as a doctoral student in Linguistics, who in my opinion is a public speaker ready to take on the world. His mantra to the assembled crowd of black students was repeated several times to make the point. I reacted to it immediately. It’s a beautiful phrase he was directing at the mostly student crowd to remember to always “lift while you climb.” He noted this generation is better off because of leaders like MLK. Jamaal talked about his difficulties of getting as far as he is now saying, “I’m from Compton. I wasn’t supposed to be here,” and this he says from the middle of graduate studies. Both of these students were excellent choices to open a weekend of events to honor MLK Jr. Applause to the Hudley’s for being the wranglers of talent. These Masters in Linguistics evidenced their mastery of the language. I listened to these students’ stunning use of language and personal stories of their struggles. What a profound way to begin the weekend for me.

This UCSB portion of the weekend was ably curated by the husband and wife team of Chris Hudley and Dr. Anne Charity-Hudley. He works in the finance department.  She’s the North Hall chair who was the last speaker at the Eternal Flame and told two chilling personal stories of being abused, held by the police, disrespected and in fear of her life. Dr. Charity-Hudley pushed through to get to a better place where she’s less in fear. Fear has curtailed the lives of the black population she plainly stated. 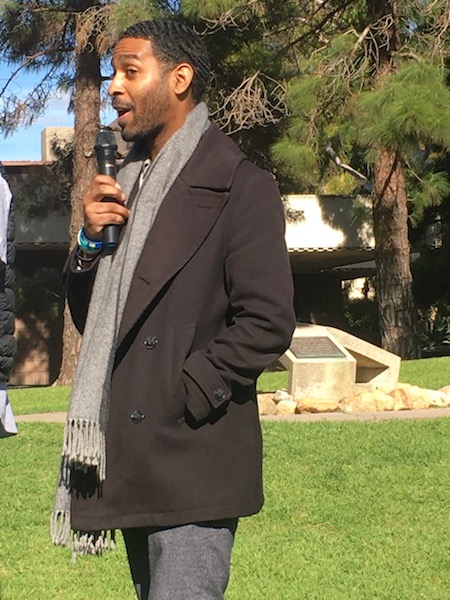 My thoughts went to the effect of long-standing abuse on generations and how the study of this experience, epigenetics, becomes a layer in the generations who follow. deandre defined the time frame earlier. The struggles and challenges they have to work through almost daily saying lamentably, “(it) has been going on for 500 years.”  I thought, glad the study of what happens to a person whose ancestors lived through it has become legitimized and measured. These were the speeches that made one think.

Dr. Charity-Hudley led the group from the lawn on a short walk to the first stop the building she chairs, North Hall, where in 1968, the same year the Eternal Flame was gifted, 16 from the Black Students Union *occupied North Hall. The protest lasted about half a day, and ended when the Associated Students Judicial Committee recommended suspensions for all those involved. The administration granted seven of the eight demands. Italics reflect the abbreviated copy pulled directly from editor Jim Bettinger’s article on the front page of El Gaucho (Vol.49-No.20) with “complaints of racism, equal opportunity, developing a college of Black Studies, increased hiring of minority persons, especially a black female counselor for the EOP program, appointment of black coaches whenever possible, non-condonment of any harassment by any students, whatever color, development of a community relations staff to be ‘actively prosecuted’.

The statement made by the Chancellor’s office made no mention of the first demand, asking for the firing of Athletic Director Jack Curtice and Arthur Gallon, head of the Physical Activities Dept.

Do go to the Facebook event for the Monday events (9a-12:30p)– where & when.  Look forward to seeing you at the Arlington Theatre and let’s break some records on attendance.

To who ever down voted my

I'm not sure what news you

You posted that already

Who exactly "is used to" the

TO: LOOSECANNON I am a

That's one way to spin it.

Whites are not a minority