A 37-year-old transient was arrested for allegedly starting a brush fire in a homeless camp along Highway 101 near the Bird Refuge on Thursday. 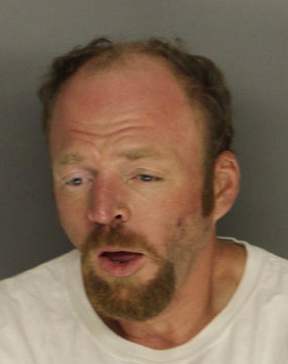 An SBPD officer was conducting a traffic stop when he noticed the fire and informed dispatch. According to the police, the officer saw Adams allegedly consuming alcohol and watching a homeless encampment burn. The officer questioned Adams but he stated he did not start it. At some point a struggle took place between Adams and the officer over the alcohol where the officer was punched in the face, accord to KEYT News.

The Santa Barbara Police Department says one officer was on a traffic stop when he saw the fire and called it in to dispatch. The officer walked around the scene of the fire, according to police, and found Adams apparently consuming alcohol and sitting watching the homeless encampment burn. Police say no one else was around the scene at the time.

At one point, authorities say, the officer questioned Adams about the fire but said he didn't start it. Soon after, a struggle happened between Adams and the officer over the alcohol, police say. The officer got punched in the face but besides complaining of some minor pain, the police department insists the officer was not injured.

Adams was eventually arrested and charged.

Brush fire in a homeless camp along Highway 101 at Milpas in the southbound lane area.

Photo by an edhat reader 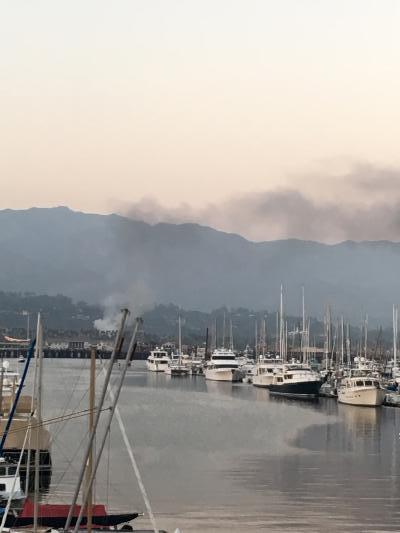 Well, one huge factor in this STILL being an issue, is that even though I've said 20 times; "Here's your answer" while holding up a viable business-plan..no-one has offered to read it!.
Two "gang-czars" later, SB is still hiring "consultants" when the answers lie within the People of this town. #MSBGA!

There are going to be A LOT more homeless people as the housing situation across the nation gets worse and worse. I will never be able to buy a home here, in my own hometown and it's heartbreaking. As the baby boomers age out and Generation X comes after, more and more people are finding it hard to make ends meet, but yeah, keep voting republican... keep widening the gap between the haves and the have-nots. It's crazy how fine a line it can be between having a roof over your head and being homeless. I thank my lucky stars that I can work and I'm not mentally ill like many of these people with no access to services.

How about if the City hires gangbangers from the East and West sides and Goleta to get rid of the bums any way they wish- Since the local governments hands are tied and local citizens would be considered mean and politically uncorrect, it seems like the perfect solution!

In your violent fantasy game, can we also please gather up all the trolls and stone them in De La Guerra Plaza?

Because not all homeless people are criminal, arsonist ars holes...Some people are really screwed up and very gentle..

Good charge him with arson and assault on a police officer put him away to cool his heels and when he gets out I'm sure a dreamer will take him in...

I don't think it's hostile to not want people who don't give a shit to burn your town down leave things the way you found it clean up your messes Where do you live? Invite the houseless in your home and feed them cloth them, support them I have I don't do it anymore most of the ones I took in abused me or my things or tried to take over...Many of those people I took in own homes now have money and cars but I'm crap to them...The ACLU sued the city of Santa Barbara to not ticket and arrest the homeless who have no home to sleep in the rights to camp. They did not sue the city of Santa Barbara to give the homeless the rights to leave unattended camp fires which would spread turning into brush and vegetation fires...The homeless have it made here if they don't insist on breaking the law if they do they belong in jail like everyone else.

Why are the homeless starting "warming fires" during the day when it's 80+ degrees outside?

As of a few days ago, there was a tent and encampment clearly visible at the Fairview end of the area burned a few weeks ago off the side of 101 south between Fairview and Los Carneros. Blatant.

Local Matt, report the encampments to whom and how?

Much appreciated! Glad to see there is an active response to these encampments.

Fill out the customer service form at Caltrans District 5
https://csr.dot.ca.gov/
You will receive a confirmation and once they address the situation, a follow-up notice. Several weeks ago, I reported a homeless camp on the Las Positas northbound off ramp and they did clear it out within a few weeks. This one was just across the road from private homes in the Samarkand. A fire disaster waiting to happen. You can also report excessive litter, etc.

Heard they were hoarding a huuuuuge cache of plastic straws.

Engines 2 and 5 to remain on scene and wait for investigator command dissolved SBPD also on scene.

The CHP/ sheriff/ fire need to use there helicopter & night vision goggles to scope out these homeless camps. Trade off monthly, share the responsibility and cost. These encampment fires are happing too often.

Excuse me please, my bad snark. Finding homeless camps isn't the problem. The police, sheriffs, and Caltrans know where the homeless live. The bottom one-percent is much easier to find than the top one-percent. The problem is what to do with people who don't have enough money to rent a Santa Barbara campsite. Saying "Move along." doesn't work.

Helicopters and night-vision goggles? Are you blind? It's not like they're hidden away like Viet-Cong bases in the jungle. Just look in the daytime, then call in your airstrike.

Roger over and out.

Not a huge fire but a tall fire alone the 101 Just my opinion but these people who light these fires and let them get out of control should be arrested for arson...My opinion.

I went down there but by the time I got over there the fire was pretty much knocked down and there were alot of cops. I don't know what happened exactly except the fire was in a homeless camp...Other friends at Dwight Murphy said the fire was tall flames 20 or 30 feet...

Drove by on 101 at Milpas Southbound at 7:56p, viewed 10 foot flames and it looks like trucks are on scene with manpower to get fire under control.

I’m hearing helicopters already but not sure it’s related?

I just drove right past it. It's at the northbound Milpas exit on the 101 south bound.

ON SCENE POLICE REQUESTING MORE BACK UP...

SBPD RESPONDING CODE 3 LIGHTS AND SIRES FOR BACK UP..

I looked out there huge cloud of black smoke in the air there my neighbors on the 2nd story next to me say they see flames at least 20 feet in the air...

Sad to be near Dwight Murphy Park SBPD and engine 2 on scene.

Said to be near Dwight Murphy...

I hope they caught the SOB.

Hiding to give tickets is

I heard that masks don't

I heard that State water just

Too bad we have been

I have a great dentist, and

My dentist in La charged $15

Did not see lightening this