Scroll through the above photos

I was working indoors when the distinctive sound of WWII radial engine aircraft caught my attention. Running to the window it was clearly a flight of T-6 Texans. Since they were out by the hills headed toward SBA there wasn't time to get pix.

When they passed closer headed away from SBA I was able to grab the camera and run outside to snap these pix of them re-forming from possibly a "missing man" flyover.  They're apparently the Condor Squadron from Van Nuys, and the polished silver one is probably N63RB. Keeping them shiny like that is a LOT of work, and sure makes that one stand out.

An edhat reader has confirmed the military flyover was done in honor of Lt. Colonel Jack Harris USMC, Retired.

Harris was a long-time board member of the Pierre Claeyssen's Veteran's Foundation, which honors veterans in the Santa Barbara area. He passed away on March 6, 2020 and due to COVID-19 restrictions, his funeral service was held outdoors with full military honors. Below is his obituary:

Jack Harris, a true American hero, died on March 6th, 2020. He was born August 17th, 1926 and grew up on a ranch in eastern Oregon during the great depression. He raised “bummer” lambs to help support his family, bottle feeding the rejected animals and selling them back to farmers. He sold newspapers, worked as a busboy; a variety of jobs to get by, and when World War 2 started, he worked in a shipyard in Portland before finally becoming old enough to join the military. He was ready to invade Japan when the atomic bomb ended the war.

The Marine Corps sent him to the University of New Mexico for officer training where he met his 1st wife Peggy. He became the 1st student to graduate directly from flight training into jet school. He joined Marine Fighter Squadron 223 which had the first F9F Panther jets.

He deployed to Korea in 1951 and fought 87 combat missions, was awarded the Distinguished Flying Cross and 4 Air Medals, and was flying one of those missions when his first son Paul Harris was born. His squadron received the news through the Red Cross and when he landed there was a sign in the ready room saying: IT’S A BOY!

Jack came home to the US, qualified as a night fighter, then returned for a second tour of duty in Korea. After the cease fire, Jack served with the British Royal Navy on their carrier-based night fighter sqdn and had over 100 carrier based landings on the HMS “Bulwark.” They sailed around the world with stops in England, Nova Scotia, Africa, the Red Sea, the Persian Gulf, India, Singapore, Hong Kong, the Philippines, etc. His second son Elliot was born while he was away.

Jack was commanding the first amphibious Marine landing in VietNam, flew many missions there, earned another Distinguished Flying Cross and eventually retired as a Lieutenant Colonel.

Upon retiring, he began working at UCSB running the extension program for the University of California, advising special districts throughout California how to manage their government agencies. He took that experience and became successful in his private consulting business.

It was at UCSB that he met Betty Howson, his second wife and expanded his family to include the Howsons: Beth, Paul and Steve. He lived a life of innumerable adventures, but rarely spoke of them. Many of his experiences are known only to God now.

He is survived by many grateful children and grandchildren who are proud to be associated with this extraordinary warrior, patriot and statesman. May he rest in peace. 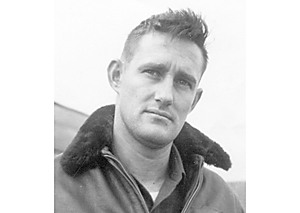 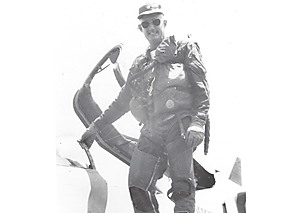 T-6 Texan with missing man plane smoking and veering off and above. 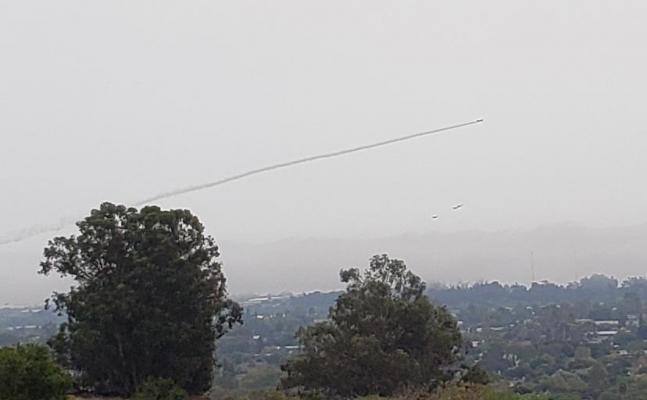 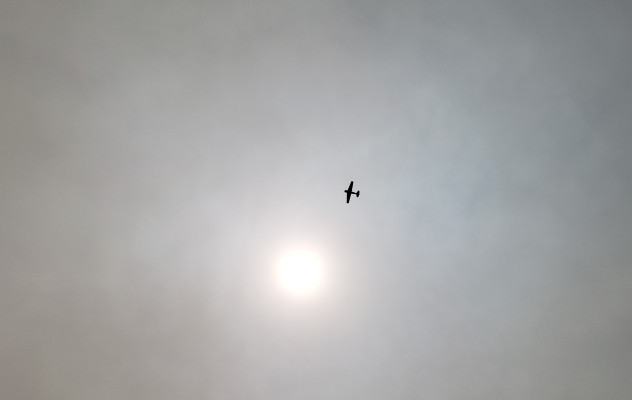 Did anyone else hear the loud group of 4 planes that flew around Patterson?  Sounded like and looked like bomber air crafts?

Thanks for pics John and update on memorial service Edhat reader.

Why are they so loud? Because of the high performance engines and no mufflers to increase power? Wish I could do that to my car!

I like to think it's bigger then just one person but rather a tribute to the collection of all the good and kindness practiced in the world for one another. We may never know exactly who the tribute was for, but we can all celebrate the spirit of kindness!

John, thanks for clarification....beautiful sight, picture...

Thanks for the updates and photos. :-)

A fitting tribute to a WWll bomber pilot....RIP

How does one die from restrictions?

No, it was for Jack Harris. There was a memorial for him today https://www.independent.com/obits/2020/08/28/jack-harris/

Thanks. Nice new ones others shared, of the missing man and lone silhouette in the sun.

I thought it was the McCaw woman's winged monkeys sent out to deliver the $2 million settlement that was awarded to the employees that she'd wronged. But realistically, I don't think that's ever going to happen.

There was an outdoor memorial service being set up at Welch-Ryce-Haider Funeral Chapel on Ward Drive this morning with a bunch of folks in their dress uniforms. Maybe related to that?

I remember in the 1960's where my neighbor had a P-51 and he'd fly it over the Goleta foothills where we lived. Only a Mustang can make that sound.

Decades ago there was a P-51 painted overall dull orange that would often do maximum performance takeoffs out over Goleta Beach.

I was doing C-172 landing practice on runway 15 at SBA once, when a P-51 took off from runway 25 just after my takeoff. Since we would be crossing paths when each of us turned after takeoff, ATC called each of us to warn about that. We both acknowledged, knowing it wouldn't be a problem even though we'd both already turned toward each other. By the time our paths crossed, he was already well past my course and at his assigned maximum altitude. What a beautiful scene that was to watch from my window seat! :D

Just went to your photo, PCORLATAN. Good photo! The formation doesn't look to be missing man, though I could be wrong. Googled "missing man formation" which produced some nice pics of the Blue Angels doing what was noted as that formation. Whatever formation the T6 planes were in, is a tight clean grouping, which shows a lot of skill and experience. Cool!

They were T-6 Texans. I'm about to send Ed some hasty zoom pix. When I first heard them, they were out by the hills headed toward SBA and distant enough I didn't get pix. The second pass here 101 @ 154 I thought they'd overflown SBA in formation and were circling back to land. When I saw they were turning East away from SBA a quick dash to grab the camera enabled me to snap them forming up. Though I vastly prefer the sight and sound of a P-51 it was fun to be fairly close to this formation of the trainers that led a few WWII pilot trainees to service in that amazing Mustang.

It was a close formation of four ex-military piston-powered trainers. Only got a brief view, but looked like T-6, or possibly T-28 aircraft.

They looked like something out of an air show, but I don't know anything about planes....

Heard but didn't go outside to see. Could they have been fire bombers on the way to Santa Maria to re-load?

No fires nearby from what's currently online, thankfully - smoke we're breathing now is mostly from the firestorms to our North. Looks like we may be in for some even thicker smoke if winds shift as seems likley.

Just saw them....very cool...in formation.
Almost, wing to wing at one point.
Maybe, John Wiley, can give us info ?

Sorry I took so long, due to snapping and sending Ed those pix. In one of them you can make out aircrew in the back seat. If not Pilot In Command, maybe that person earned a ride by helping to keep the aluminum polished. It takes a LOT of work, especially if it's parked outside which that one may be given the cost of hangar rentals in SoCA.

Op-Ed: Why We Need CalCare

Go for it! Triple taxes to

Op-Ed: Why We Need CalCare

Will there be any residence

Yes I'm a bit surprised they

Not if it's new. Just means

Reminds me of: "And in other

Got through the phone line

I always get a kick when they