It is hard to believe that the Paperbark Tree, one of the most drought tolerant trees grown locally, is native to a habitat of brackish swamps, wetlands, and sloughs.

This tree’s tolerance for extreme drought, along with its robust and graceful growth habit and attractive evergreen foliage, have made it a commonly planted landscape tree in Santa Barbara since its introduction here in the early 1900s.

In our Mediterranean climate, it typically grows quite rapidly to a height of 30- to 50-feet tall with a spread of 20- to 30-feet.  It begins with a narrow or pyramidal crown that grows more rounded and spreading as it matures, frequently developing multiple ascending trunks.   The  new branches are pendulous and covered with leathery lanceolate-shaped leaves (2- to 4-inches long and ½- to 1-inch wide).  The silky new leaves emerge with a yellowish-bronze color that becomes flat green with age.  The leaves are very aromatic when crushed.  Its larger leaves are one of the main characteristics that distinguishes this species from other Melaleucas, giving it one of its  common names, “Broadleaved Paperbark Tree”.

The tree’s white flowers form bottlebrush-like spikes on the ends of branches.  Each spike (up to 6-inches long by 2-inches wide) contains many clusters of flowers, often in groups of three.  The flower stamens are white to cream-colored and appear in bundles of five to ten.  Flowering normally occurs from late summer to early fall but can occur sporadically throughout the year.

After pollination, the flowers are followed by dark brown woody seed capsules held in tight cylindrical clusters (up to 6 inches long) around the stem.  The clusters can persist for one year or longer.  Each capsule contains as many as 200 to 300 tiny seeds.  A mature tree can produce up to 20 million seeds per year!

This tree’s most distinguishing feature  - and the reason for its common name of “Paperbark Tree” - is its thick, white-beige, papery bark, which peels open in layers to form loose, ragged, rolls.  While there are other Melaleuca species with papery bark, this species produces bark that is much thicker and more impressive than the others. 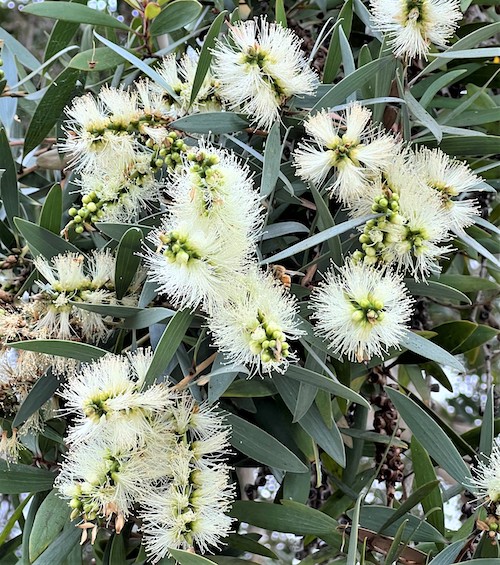 The Paperbark Tree is native to coastal areas of eastern Australia, New Guinea and New Caledonia.  There, it grows primarily in swamps, wetlands, and estuaries, where the soil is often too salty or too acidic for other trees to grow.

The botanical name for Paperbark Tree is Melaleuca quinquenervia. The genus name, Melaleuca, comes from the Greek words “melas”, meaning “black”, and “leukos”, meaning “white”, because many trees in this genus have both blackish trunks and whiteish branches.  The specific epithet, quinquenervia, is from the Latin words “quingue”, meaning "five", and “nervus”, meaning “nerve” or “vein”, and refers to the five distinctive veins on each leaf.

In addition to the names “Paperbark Tree” and “Broadleaved Paperbark Tree”, this tree has other common names including, “Tea Tree”, “Swamp Tea Tree”, and “Cajeput”.  The soft bark is useful as a natural tinder for lighting fires, which is the reason for the last common name, “Punk Tree”.

The Paperbark Tree has been utilized by indigenous people in Australia as the source for teas and for distilled oils used in traditional medicine.  The bark has been used as wrapping material and in constructing shelters and canoes.  The wood is resistant to decay in wet soil, making it quite good as fencing material.  The fragrant and nectar-filled flowers are attractive to bees.  Today, essential oils made from the tree are used in a variety of cosmetic products, including perfumes, and in herbalism and natural medicine for its antiseptic and antibacterial properties. 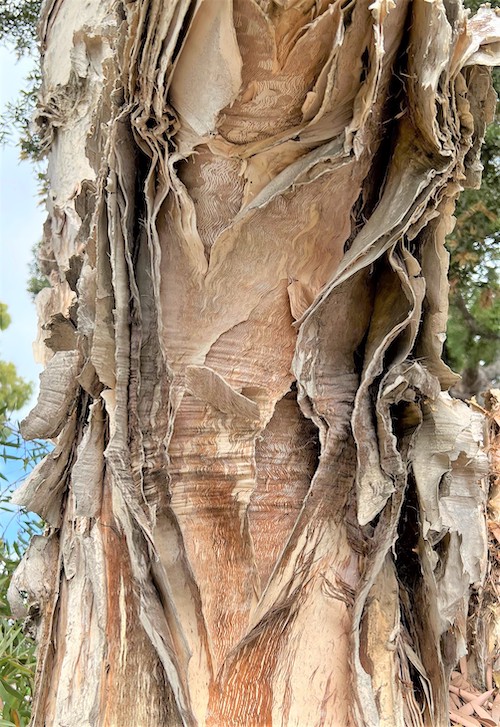 The Paperbark Tree does best in full sun to light shade.  It can grow in practically any type of soil and is extremely drought tolerant once it is established.  It does well as a single specimen tree or as a grove in the garden.  While it is frequently planted as a multiple-trunked tree, perhaps as a substitute for clumping birch trees, it is best to give each tree sufficient room to grow as an individual.  It  is cold hardy to 25 degrees F. and can sustain foliage damage below that.  It does not have any serious and insect or disease problems and requires only minimal pruning for clearances.  Its roots can be more aggressive that other trees of this species, so do not plant it close to hardscapes and foundations.

This attractive and very sustainable tree makes a fine street tree (if root barriers are installed) and a great addition to any garden, park, or commercial planting, because of its beauty, generous shade, and visual interest the year around.

We have one of these trees in our front yard. Thank you for this most informative article. The only name you missed is "Toilet Paper Tree", another common name for obvious reasons. They're also great for tree climbing, if you're about 10 to 12 years old. Thanks again! Interesting stuff like this is why Ed is here!!!

Thank you David for your monthly contibution!

Great article. Love all the detail!

Melaleuca is the foundation of a huge multi-level-marketing empire, a Morman Amway for the herbal crowd. https://www.brooksconkle.com/is-melaleuca-an-mlm/

Well, Melaleuca is the NAME of a huge MLM empire...

One Injured in Buellton Vehicle Rollover

Santa Barbara County firefighters responded to a vehicle rollover near Buellton on Wednesday.

[Update]: An injured paraglider off Gibraltar Road was helicoptered to a local hospital late Wednesday morning.

Ron shares a photo of the SpaceX launch on Tuesday morning.

Robert recaps Eugenie Scott's lecture through the Humanist Society on why Creationism may come back to our schools.

Chuck shares a photo of Comet C/2022 E3 and the Moon occulting Mars.

The City of Goleta announces its Beautify Goleta event collected a record amount of trash, 15,000 pounds.

In the wake of antisemitic messages found in Isla Vista, the Sheriff's Office posts a message of solidarity with the Jewish community