The Dingle Distillery which opened in 2012.

On a trip to Ireland this past fall, my family and I made a point to stop in Dingle, an adorable seaside town with a dolphin mascot and a name that makes you giggle, but just so happens to be Santa Barbara’s Irish Sister-City.

With a population of nearly 2,000, Dingle boasts small-town charm in a big way. Located in County Kerry, the southwest portion of Ireland, the city itself is built around its harbor, however, the Dingle Peninsula as a whole incorporates a large section of lush landscape and smaller villages. 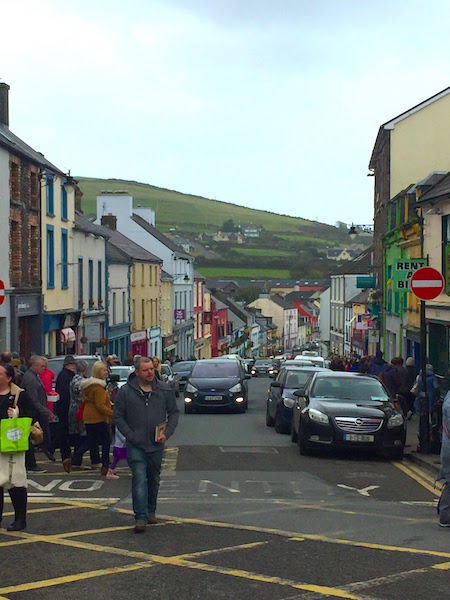 While I wasn’t there to represent Santa Barbara, I did find some interesting comparisons. The people were very kind and friendly, and there is a huge tourism and fishing industry which they often combine the two for fun water excursions. Unfortunately, the early October weather did not promote seafaring, as the town was just about to shut down for the winter. Although, with the bouts of rain and wind chill, ice cream shops were still open with lines out the door. One thing I found fascinating was how much Irish people love ice cream in cold weather, and with their local dairies providing the supplies, the American versions were a sad comparison. If you ever find Murphy’s Ice Cream, try it, you will not be disappointed. 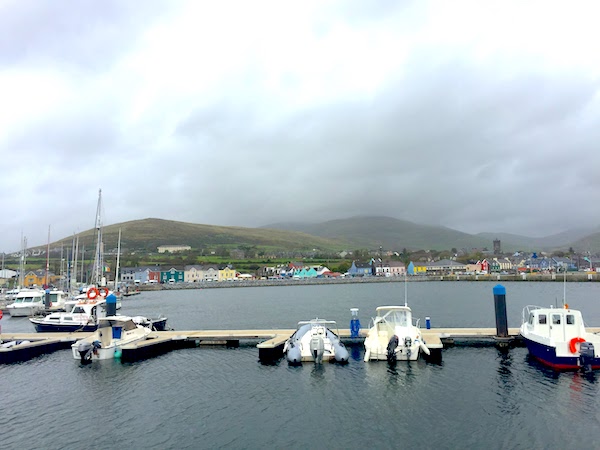 A lot tourism-focused around a Bottlenose dolphin named Fungie. If you’ve ever seen the sitcom Parks & Recreation where the town is obsessed with a mini-horse named Lil’ Sebastian, then Fungie is the Irish version of that. The town loves Fungie and they boast dolphin tours, dolphin statues, dolphin shirts, dolphin pens, a dolphin memorial, and even a dolphin sculpture coming out of a building. It’s a lot. 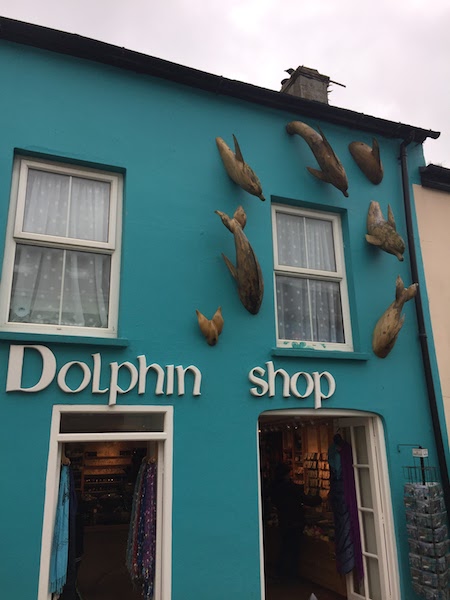 My family and I stayed at a charming B&B that had views of the harbor from the front, and hillside views of the sheep grazing in grass on the back. The proprietor of St. Joseph’s Bed and Breakfast, Mary, had the warmest grandmother energy you could possibly imagine. She was sweet and attentive and purely delighted to share the culture and the history of their town.

Naturally, I asked her about Fungie. She told us the whole story about how he entered the Dingle Bay in 1983 and closely followed the boats of the fisherman. They started to take notice of the young male dolphin traveling alone and throughout the years he made numerous appearances, so much in fact that they considered him a permanent resident of the Dingle Harbor. He then grew more comfortable with human contact and according to the locals would put on great shows with his dolphin acrobatics. 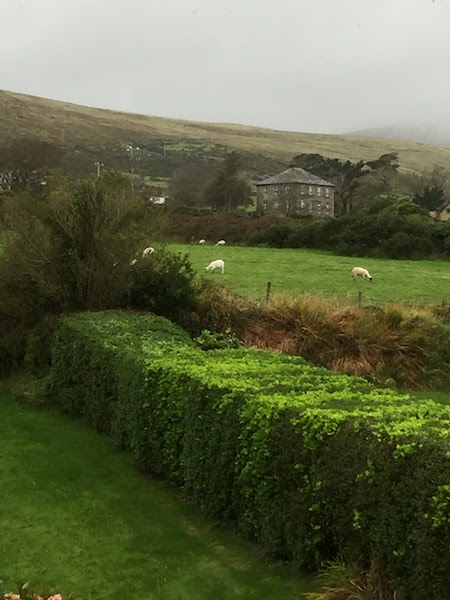 View from the window of St. Joseph's Bed and Breakfast

When I asked how they know it’s the same dolphin all these years she said in her adorable accent, “Oh we know its him. He has specific markings and those fisherman can always tell.” I doubled down, and asked what would happen if he died or never returned. “Ahh well… that’d be a sad day in Dingle then,” said Mary.

Later at the pub, a younger guy was our bartender and I asked him what the fuss was all about around this dolphin, making a joke about how silly it is thinking it’s mostly a tourist trap. He very quickly corrected me in a serious tone and said Fungie is an icon and a beloved member of their community. At that point, why question it? Just jump in and love the dolphin as much as they do. So I bought my Forever Fungie shirt and continued on with the tour of Dingle. 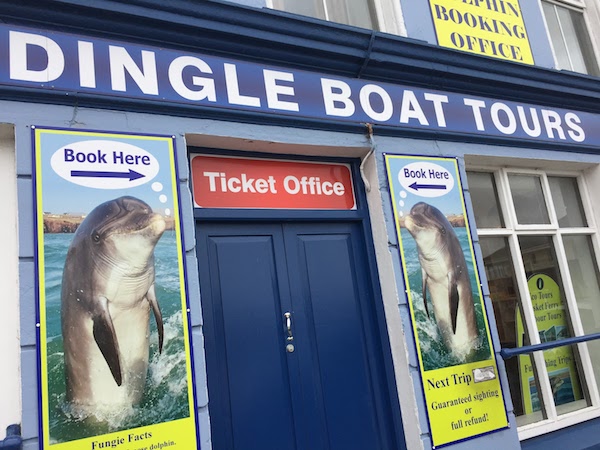 One of the many Fungie tours

When we arrived, it happened to be the annual “Dingle Food Festival,” their major event of the year. The town was packed with locals and tourists as the streets were lined with food and beverage vendors serving up every genre of cuisine. I even saw a hot dog stand. A family member tried one just to see how it was, and the verdict was “not bad.” I went for a gyro instead and it easily rivaled our local Greek Festival’s offering.

The colorful buildings were alive with lights and entertainment. Traditional Irish music was played on every corner as the locals danced with beers in hand. Local and national breweries had stands serving pints and Dingle itself has their own distillery where they produce whiskey, gin, and vodka. 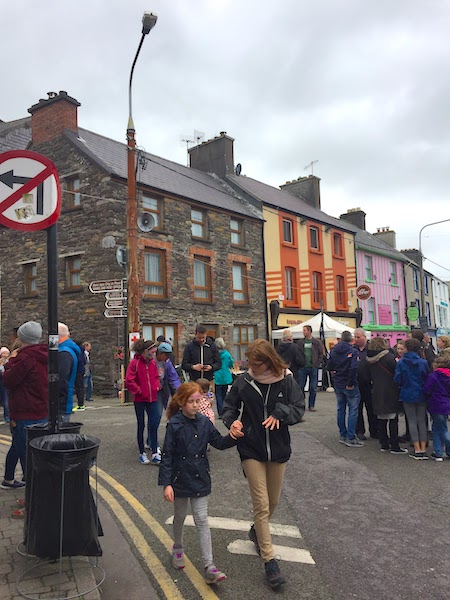 Dingle has also made a name for itself in Hollywood as it was featured in the 1970 film Ryan’s Daughter. Most recently, the Star Wars franchise found appeal off the Dingle Peninsula at the Skellig Islands for filming sections of The Force Awakens and The Last Jedi.

The Skellig Islands are off the coast of the Dingle Peninsula, with Skellig Michael being the larger of the two. It’s unpopulated, unless you count the 8th century remains of a Gaelic Christian monastery and a bevy of protected seabirds.

If you’re a fan of the franchise, you might recognize the area as the secluded home of Luke Skywalker. Although, the film itself and tourism of the island have caused concerns because of the bird’s nests (it has Special Protection Area status) and historic structures. 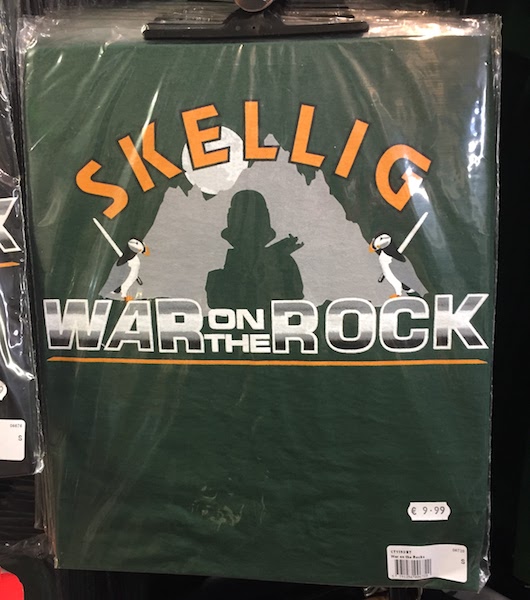 The souvenir shops carry a ton of Star Wars inspired memorabilia, although since the movie name is trademarked, they were pretty clever with the merchandise workaround. Skellig Wars was a popular one.

I can see why this place was named a sister city. There’s similar charm, friendliness, and gorgeous scenery. A quick two-night stay on our epic Irish road trip simply did not feel long enough and I hope to be back in the future. Sláinte Dingle, from Santa Barbara. 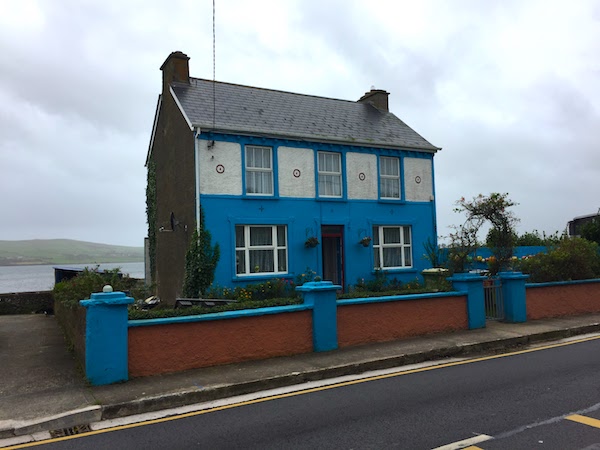 The Santa Barbara Sister City stone marker is up at the top of the Conner's Pass. It's a great view from both sides and is a popular stop if you are doing the loop of the peninsula. I have a pic but can't attach it here.

Mom had an Irish friend, Mary, who immigrated to Canada then to Montecito. She was one of 14 children. Mary wanted us to take a trip "home", rent a horse drawn caravan and have me drive them around. Unfortunately, we never did. Your stay in Dingle sounds marvelous! Lovely photos, thanks

“A good friend is like a four-leaf clover, hard to find and lucky to have.” Irish Proverb.

Also one on the Malecon in Puerto Vallarta another sister city.

All of the Santa Barbara Sister Cities have a Bud Bottoms' dolphin sculpture. The spark of art connecting the dots.

Felt as if I were there with you Lauren. Fun read! Hope you can come to the Dingle/SB Sister City general meeting. Generally, we have fun. We keep the meeting to 90 minutes. 5:30 -7pm. Coming up Wed., March 28 @ Hillside House, 1235 Veronica Springs Rd., 93105. Become a member at the meeting and you can join us on the trip to Ireland being planned for September. Slainté www.Facebook.com/SB2DINGLE

"When we arrived, it happened to be the annual “Dingle Food Festival ...”
Happened to be? Sure, Lauren... We believe you. ;-) Great write up, thanks for sharing! Now I want to go too!

Carrigaline,Ireland, 3 hour drive from Dingle to other coast. Foodies: The Fig & Olive Cafe in Carrigaline. Sweet and savory pancakes. Bread and butter pudding. Go up the hill and imagine seeing the Titanic as it sailed out of port. Carrigaline is near Cork City. Titanic Museum in Cork harbour: http://www.titanicexperiencecobh.ie/

Carrigaline Court Hotel in Carrigaline, Co Cork is good, and has a nice restaurant. Been there. Speaking of tides, they re-define the landscape twice a day, and give the impression of an ever-changing scene.

18 ft. tides in Cork Harbor raise the level of the River Lee, allowing large ships to come into port. When docked, they are less than 100 yards from City Hall.