The Santa Barbara County Fire Department reports the brush fire in Happy Canyon on July 6 was caused by a power line failure.

The investigation discovered an electrical component failure where an energized line made contact with the ground below causing multiple fires between two power poles.

The forward progress of the Happy Fire has officially stopped. All firefighters on scene are working to establish a line around the fire while all air support and dozers have been released.

A four-acre brush fire is burning in the 7000 block of Happy Canyon in Santa Ynez, reports the Santa Barbara County Fire Department.

The fire is burning in ranch land with some structures in the area and downed powerlines with temperatures in the mid 80's and winds under 20 mph, reports Mike Eliason with the County Fire Department.

The two air tankers were released while the helicopter is continuing to make water drops to assist ground crews with containment. The Happy Fire is currently at four acres while an investigator is en route to determine the cause. 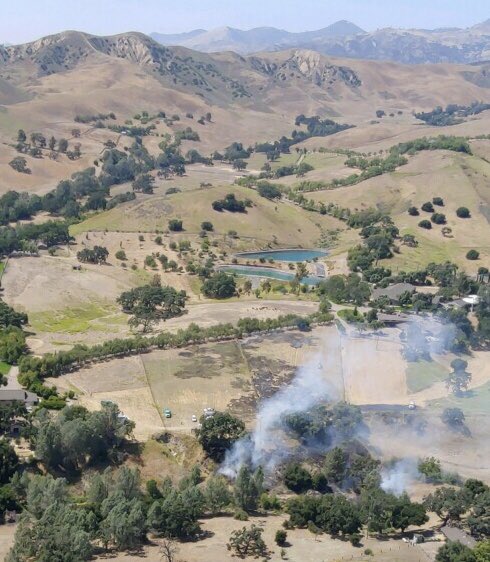 Air and dozers all released with forward progress stopped. Getting a line around it.

Thanks for the info, TAGDES.

What was the cause? The downed electric lines?

Frontier Communications has started a construction project to bring its Frontier FiberOptic service to many parts of Santa Barbara.

An edhat reader shares a photo of a green lynx spider that is eating a honey bee.

Edhat readers share their photos of the Harvest Moon.

On Saturday, Cate School and Friends of Bates Beach coordinated the cleanup of North Rincon (Bates) Beach as part of the annual California Coastal Cleanup Day.