The Holly Oak, a stately evergreen tree, was first introduced into California in 1858 and is now widely planted as a street tree and shade tree in Santa Barbara.

In its native region around the Mediterranean Sea (Southern Europe and Northern Africa), it fills an ecological niche like that found on the Central Coast, making it perfectly adapted to our local climate and soils.  In fact, the Holly Oak is often confused with our native Coast Live Oak, because there is a close resemblance between these two oak species. 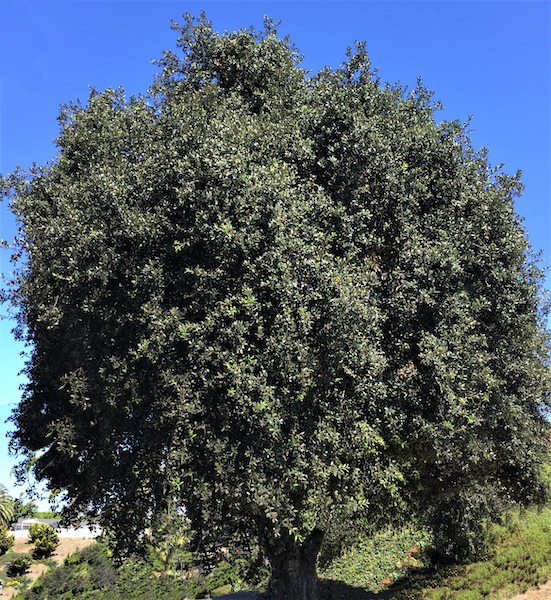 The Holly Oak offers many of the same desirable features of our native oak but, upon closer observation, has some distinctive differences that, surprisingly, can make this immigrant a preferable choice here for certain garden and landscape uses.  Its primary relative merits are a slower growth rate, a smaller size, and some resistance to diseases and insects common to all oaks.

The Holly Oak is a handsome medium- to large-sized evergreen tree, with a broad rounded crown.  It develops a dense canopy, with branches initially growing upright and then turning gracefully pendulous with age.  New shoots are covered in a downy gray felt.  The bark is dark brown or black, fissured in small rectangles.  A mature tree will reach 35 to 40 feet in height with a spread of 30 to 40 feet.  In favorable locations, an older tree can exceed 50 feet in height with a spread of over 60 feet.  They can live to a great age, reputedly 500 years or older!

The attractive leaves (ovate in shape, 2 to 3 inches long and 1 inch wide) are leathery, dark-green and shiny on the top but gray and downy on the underside, and bear holly-like teeth along the leaf margins when young.  Its leaf shape does generally resemble that of the common European Holly, resulting in two of its common names, “Holly Oak” and “Holm Oak” (Old Norse for “holly”).  It is also known as “Evergreen Oak” because it does not lose its leaves in the fall.

The Holly Oak’s botanical name is Quercus ilex. The genus name, Quercus, is the Latin name for oak trees.  Its specific epithet, ilex, is the Latin genus name for holly, again referring to the holly-like shape of its leaves. 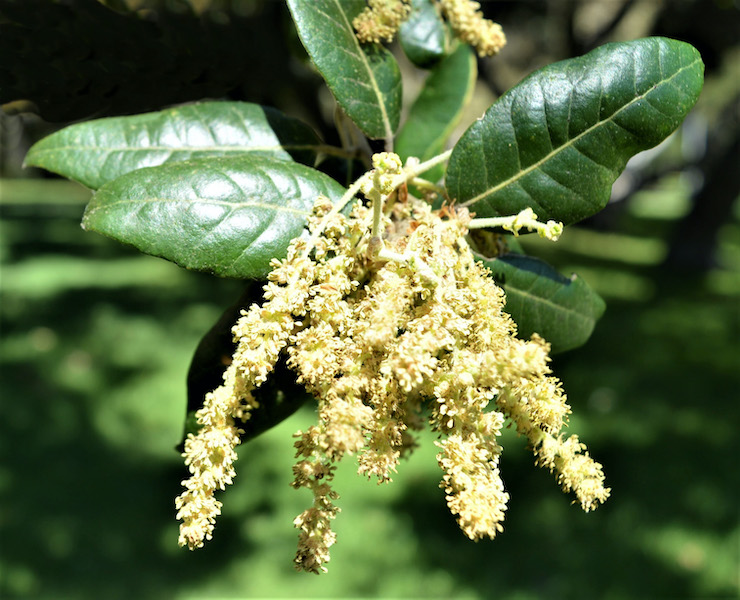 It is “monoecious”, meaning a single tree bears both male and female flowers.  In the spring, yellowish-green flowers appear - female flowers in clusters and male flowers on catkins (2 to 3 inches long).  These attract butterflies.

In the fall, copious numbers of capped acorns (up to 1 inch long) are produced in groups of 3 or more.  The acorns appear and mature in the same season.  The acorn cap is rough textured and can cover up to ½ of the acorn nut.

Of course, our jays and squirrels find the acorns delicious - they work diligently to gather and “squirrel them away” for the winter.  The nut meat is nutritious and quite edible by humans, whether toasted or ground into flour.  Freshly fallen acorns are a major food source for free-range pigs raised to produce gourmet ibérico cured ham in Spain and Portugal.  When processed, the acorns can be used as a disinfectant in medicinal and wound treatments.

Holly Oak’s wood is highly prized for its hardness and durability.  It has been used for thousands of years - and is still being used - in constructing buildings, tools, vessels, and wine casks.

In Europe, large stands of Holly Oaks have been planted to create famous truffle orchards, called “truffières”, because truffles develop naturally in ectomycorrhizal association with the oak’s roots. 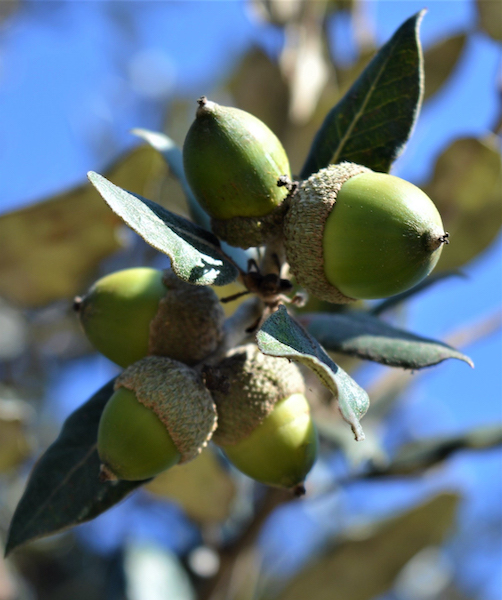 A Holly Oak is easy to grow and, once established, is drought tolerant.  It can tolerate all types of soil, though it must be well drained.  It should be planted in full sun and watered deeply in the dry season and during periods of drought.  Once pruned in youth to form a single-trunked tree, it is low-maintenance.

While Holly Oak appears to be more resistant than other oaks to diseases, it is a good idea to keep the area around the trunk of a mature tree rather dry.  This is necessary, because saturated soil will promote both “oak root fungus” (Armillaria) and “root crown fungus” (Phytophthora), ubiquitous soil-borne fungal diseases that can damage roots and trunk bases - and are often fatal to the tree.

Like all evergreen oaks in our climate, Holly Oak is prone to being completely stripped of all its leaves - over the course of just a few days - by a horde of oak moth caterpillars with voracious appetites!  Do not, in your despair, cut down your naked-looking tree.  This defoliation will not significantly harm an otherwise healthy tree - and may provide some surprising benefits - by removing old spent leaves and by providing fertilizer.  A healthy tree will bounce back quite soon enough with luxurious new foliage. 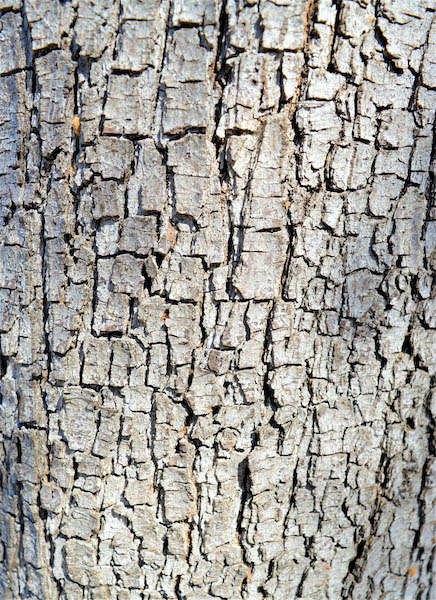 Besides its use as a decorative tree on our streets and in our private gardens, Holly Oak can be used as a coastal windbreak or can be pruned to form a tall screening hedge.

The first picture of leaves looks like traction holly with the spikey edges. The other images show leaves with smooth edges. Is this a mistake? Does the holly oak have leaves like the first image or the rest?