Her name means “kitty” in Russian, and for a snow leopard, she’s pretty petite. Weighing in at about 70 lb., Kisa (KEY-sah) arrived at the Santa Barbara Zoo on Thursday, November 13, and currently resides in her new home near the Wings of Asia exhibit.

Eleven-year-old Kisa was born at the Denver Zoo on June 29, 2008 and came to Santa Barbara by way of Hogle Zoo in Salt Lake City. She is a non-breeding female who has never produced offspring, and the move was recommended by the Association of Zoos and Aquariums' species survival plan, which will make room for the breeding snow leopards at Hogle.

“It’s very exciting for us to have a snow leopard again,” said Dr. Julie Barnes, Vice President of Animal Care and Health. “At eleven years old, Kisa is a mature snow leopard, so she will likely live out her golden years with us. As adult snow leopards are usually solitary in the wild (outside of mating season or a female raising young), the Santa Barbara Zoo is a perfect option for Kisa’s new home.”

“So far, Kisa is acting a bit shy, and still getting used to her new surroundings. She has access to both her holding and exhibit areas during the standard 30-day quarantine period, so our guests may be able to see her as early as this week,” said zookeeper Kristen Weiners.

Kisa arrives just in time for the popular Snow Leopard Festival/Sledding at the Zoo event on Sunday, December 8, and is sponsored by The Notley Foundation.

Snow leopards have a variety of adaptations that enable them to live in the extreme conditions of the high mountains in Central and South Asia, including large paws that act as snowshoes, thick fur that insulates the body in a variety of temperatures, and enlarged nasal cavities to facilitate breathing in cold climates. Despite their name, snow leopards are also adapted to thrive during the extreme heat of the summer months, including the grey-white color of their fur, which blends into the environment even when the snow is gone.

Snow leopards are designated on the IUCN Red List as a vulnerable species, and poaching is the number one reason for their low population numbers. A number of other factors threaten this species’ survival, including overhunting of prey (like wild sheep and goats), habitat destruction, and climate change.

About Snow Leopards at the Santa Barbara Zoo

The Santa Barbara Zoo has cared for snow leopards since 2004, including most recently male leopard Everett and female leopard Zoe. “Both Everett and Zoe lived very long and full lives and were wonderful ambassadors for this species, which faces so many challenges in the wild,” says Barnes.

The Santa Barbara Zoo supports the work of the Snow Leopard Trust (www.snowleopard.org), which works to better understand the endangered snow leopard, and to protect the cat in partnership with the communities that share its habitat. 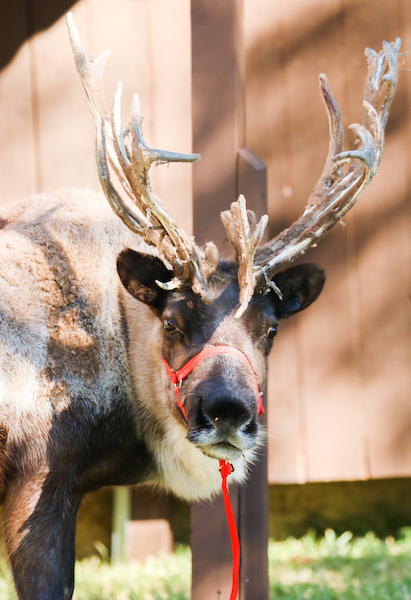 Female reindeer Cookie and Peppermint have returned to the Zoo and can be seen on the lawn near the Zoo’s hilltop. Winter-themed and holiday-related activities take place throughout the season, including the popular Snow Leopard Festival/Sledding at the Zoo on December 8. Santa will be available for gift requests and photos on weekends December 7–22. There is no extra charge to view the reindeer.

The two reindeer are on loan from Windswept Ranch, located in the foothills above Antelope Valley near Tehachapi, California. The facility is home to a collection of animals including camels, llamas, zebra, alpacas, sheep, goats, horses, deer, and reindeer. Many animals have been rescued or rehabilitated. For more information, visit www.capettingzoo.com.

Sad to hear this. I had hoped this tiny zoo would not replace the large cats who have passed. Snow Leopards in the wild have a range of 5-15 square miles. In this country they are bred to live their lives in small glass enclosures. This girl was discarded by the zoo where she was born because she wasn’t able to reproduce. They needed to make room for a breeding pair. Sad all the way around....
There is no doubt everyone who cares for the animals at our zoo are dedicated and have a great love for these animals. They receive excellent veterinary care. But that doesn’t make a life of confinement acceptable, it just makes it longer...

She would already be dead in the wild. We should ask her...

"Live out her golden years." My heart aches, thinking of this Snow leopard trapped in her tiny enclosure day after day, night after night and for the rest of her life. Poor baby. As for the Reindeer. What is their natural range? 190 square miles. I agree with 10:16 PM, this is sad news.

She doesn't know a different life. I suspect she's glad to be alive.

@12:40 She does know a different life in a much larger better equipped zoo. No one is suggesting zoo animals be freed. That’s not possible. But they should be kept in the most natural as possible circumstances. Wild animal parks are a far better situation that a small box with humans staring at you all day.

Sad news, indeed. More cruel entertainment for barbarians.
This is where this magnificent creature should be, if she has to be in captivity:
5 Sanctuaries For Exotic Animals in California: https://www.kcet.org/redefine/5-sanctuaries-for-exotic-animals-in-california

To understand more about these magnificent animals, read Peter Matthiessen's classic, "The Snow Leopard". Perhaps Kisa doesn't breed because she senses her kits would have a miserable life, far away from the environment they call home.

Too anthropomorphic for me; my guess is that the shelter is very stressful for a cat that evolved as a solitary creature in the mountains and it is affecting her reproductive cycle.

When anyone complains about anthropomorphism with animals I sense a disconnect. It's not that animal lovers are loving a Disney-esque idea of animals, but if you are a true conservationist and naturalist, you know that animals do have emotions. They feel the range of emotions that we do. Studies prove over and over again that animals are sentient beings who feel love, fear, humor, pain, even empathy. They fear death. They love their offspring. Many mate for life. If you cannot see the parallels in which we are all connected to the natural world then you have a serious disconnect and a human superiority complex. Read the book "Are We Smart Enough To Know How Smart Animals Are" by Frans de Waal or the book "Animals Matter" by renowned animal biologist Marc Bekoff.

The laws of nature ore brutal and relentless - everyone eats each other up the food chain. Only in Disney movies do they exist only on celluloid fumes and leave each other alone.

She looks "thrilled" at the prospect of a new box within which to live out her remaining days. Humanity's ability to disconnect with the compassion we're generally born with is stunning.

Here is an idea since she was born and bred in captivity, much like today's obsession with multiple generation house pets, let's turn her loose in Russia Far East and track how well she does free-range. Next we liberate Fido and Fluffy.

I agree...it’s so funny how people sneer at captive animals but will lock their cats and dogs up all day while they’re at work. Some dogs are even in their crate for five or more hours. At that point I’d rather be this Snow Leopard.

Maybe after Donny gets convicted we can lock him up in a cage and stare at him.

11:48, the difference is, at the end of the work day the pets get to go out to Wilcox or Hendry's or some other fun place and have the time of their lives! When does that ever happen for this cat?

Oh please, oh please, oh please.... fingers crossed! That criminal needs to go to JAIL! And he has rolled back protections for endangered species like the Snow Leopard too. He gives not one flying F*#k about our environment or our wildlife!

Oh my gosh. They are adorable. And just in time for Christmas! Take the grandkids to the zoo!

Those cats are still hunted for their fur in Russia.

It's shocking and disgusting, but yes, they are. Insanity. NO ONE should be wearing fur in today's world.

Wow. Some Edhat comments here display hard hearts and full on ignorance. Zoos are archaic, anachronistic and nothing more than hell houses for animals. Zoos are unnatural, cruel and woeful prisons for the innocent.

A high light for all animals locked up in these prisons is the Zoo B Q when they get to see their Brothers and Sisters cooked by the ruthless humans Oh what fun...Typical heartless remarks by heartless people.

While Kazakhstan, Russia and China are lovely in the winter...there are worse spots to "retire" (for free!!!) than Santa Barbara.

All you have to do is live in a cage and give up your liberty. I'm with the cat on not having any more kittens in an environment like this.

Imagine never leaving your bedroom. You may be safe and live a long life, but what would your quality of life be? This zoo is not equipped for large animals it is too small. Gorillas, giraffes and big cats don’t belong here. If you have ever been behind the scenes here many would be shocked at where these animals go at night.

Read an article in the New Yorker that said studies don't show that zoos motivate people to get involved in conservation efforts, which is the usual reason stated for their existence. Really, once we wipe out their habitat, most of the species will have nothing to go back to, even if the zoo breeding programs are successful.

Snow leopards are the most beautiful animals! It's shocking how little regard humans give our natural world. We are in the midst of the Sixth Mass Extinction. Soon zoos will be the only place these animals will be able to live. Too many humans. Not enough habitat. We are a selfish greedy species.