“The animal shelter approached the Sheriff’s Office in January, 2018 about the possibility of creating a partnership with the Santa Barbara County Sheriff’s Office and the Northern Branch Jail project,” said Sheriff Bill Brown. “We toured the Humane Society’s state-of-the-art facilities, which are less than 2 miles from the site of the new Northern Branch Jail, and met with its Executive Director, Sean Hawkins, and the Animal Training and Behavior Manager, Jody Epstein, MS, CPDT-KA to learn about the shelter’s need to expand its dog and cat training programs. I believe that, not only do dogs and cats provide stress relief for inmates, but creating an avenue to learn a skill like dog training or animal care, is important.” The Sheriff’s Office has long considered an animal training program as one of the preferred options when the Northern Branch Jail opens. 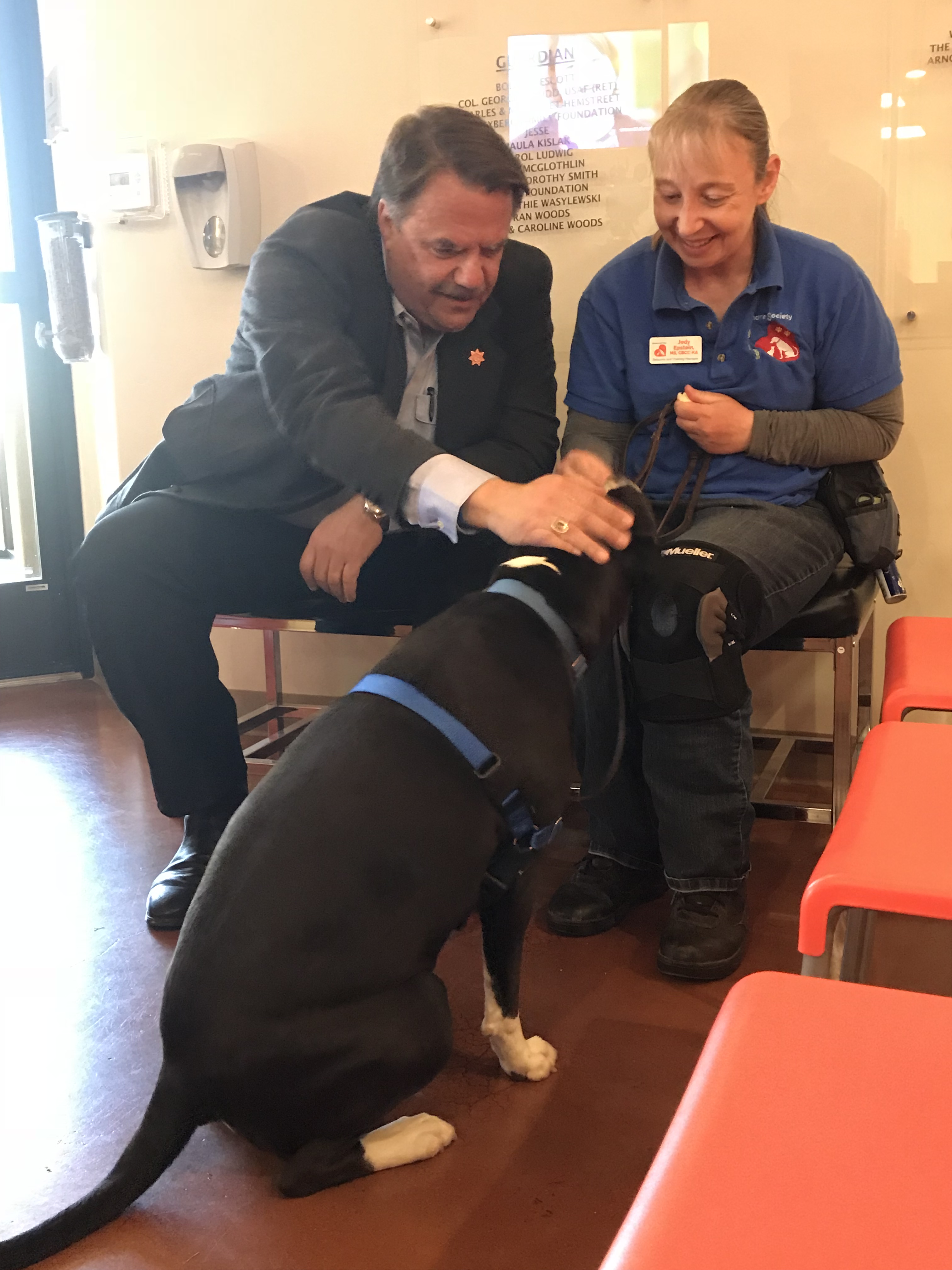 Sheriff Brown with Animal Training and Behavior Manager, Jody Epstein, MS, CPDT-KA petting Pepper who is up for adoption at the Santa Maria Valley Humane Society

“Most animals relinquished to shelters in Santa Barbara County have medical or behavior issues,” says Sean Hawkins. “We receive dogs with no manners or skills and cats who are shy or fearful and those animals are not readily adoptable into new homes. With limited resources for staff and animal behavior specialists, the number of animals we can help and heal is limited. By partnering with the Santa Barbara County Sheriff to create the inmate dog training and cat socialization program, we will increase our capacity to save the lives of more dogs and cats who would be euthanized in other shelters.”

This “train the trainer” model will be based on the successful Pawsitive Change program was developed by Marley’s Mutts in the California City Correctional Center. The goal for Santa Barbara will be to develop a ten week curriculum where the animal shelter behavior manager and dog trainers spend time in the jail working with male inmates to provide instruction on each week’s lesson. About 10 to 12 dogs will be living with inmates 24 / 7 in the new jail for the six week training period. Dogs will be trained to standards that allow them to complete a rigorous 10-step Canine Good Citizen test prior to graduation from the program. About 6 shy or fearful cats are being planned to be co-housed with female inmates for a 30 day socialization period. Living 24 /7 with the female inmates will acclimate the cats to unfamiliar people. The dog training and cat socialization are geared toward preparing these pets for new homes.

“We know that inmate dog training programs are beneficial,” continued Sheriff Brown. “We hope that our correctional programs are not only a deterrent to crime but that valuable skills are taught so that released inmates who have participated in these programs have an opportunity where they can obtain a job, such as being a dog trainer or an animal care specialist, and contribute to future positive outcomes.” The program will reinforce some of the other behavioral practices to improve inmate re-entry into society and reduce recidivism.

“With the site visit complete, we will spend the next few months working with the Sheriff’s team to write the protocols and procedures for the program that we will launch here,” adds Hawkins. “The North County Jail inmate training program is the only program that we are aware of where both dogs and cats will be trained and both male and female inmates participate. Our program will be unique; we hope to save the lives of an additional 150 dogs and cats per year.”

The Santa Barbara County Northern Branch Jail project is located near the city of Santa Maria, California. The project scope is for a 376 bed jail facility, of which 32 beds are for medical and mental health beds in a specialized housing unit. The facility is being constructed on a portion of the 50 acre property previously acquired by the County, located at Black and Betteravia Roads.

The Santa Maria Valley Humane Society exists to rescue, shelter, heal, place, and train dogs and cats while engaging the Central California community to end animal homelessness. Since 1984, the caring staff and volunteers of the Santa Maria Valley Humane Society have placed 12,985 homeless dogs and cats into new and loving homes and our highly-skilled veterinarians have helped and healed an additional 33,604 dogs and cats. Providing shelter for animals in crisis, rescue efforts, and "Pet Food Pantry" for dogs and cats in need helps thousands more animals each year. The programs are supported entirely by donations from the communities that they serve.

Great idea. Some prisons even have inmates gentle and train Mustang horses.

Heard nothing but good things about Sean Hawkins and how much he has helped animals in his time at SMVHS. I believe they used to have a program like this at one of the Lompoc prisons but the new warden axed it.

This is a fantastic idea!

A shame we can't get "socialization" for politicians!

Probably because she is a

Wasn't my favorite but it'll

And, in other daily event

Woman Arrested for Brandishing a Gun on Castillo Street

Her middle name is "Chacha."

Missing for 2 weeks now? How

High School Teacher Arrested for Sex with a Minor

His surname isn't going to