21 people have died and 2 people are still missing in the Montecito mudslides.

Crews continue searching buildings and debris flow for victims. The unstable environment remains a critical threat to civilians and responders. The large amounts of mud and debris are making access and progress challenging. Search and recovery remains the highest priority.

Damage inspection is ongoing and to be considered estimates. More accurate surveys and assessments have realigned the numbers to the most current picture and will continue to fluctuate as data is vetted. A new interactive damage assessment map can be found here.

At 7:00 am Monday, all fire resources will be released and CAL FIRE Incident Management Team 3 will transition command to the Santa Barbara County EOC.

The Red Cross closed their shelter at San Marcos High School on Thursday morning. Anyone needing assistance is being directed to the Local Assistance Center inside Calvary Chapel Santa Barbara at 1 N Calle Cesar Chavez. 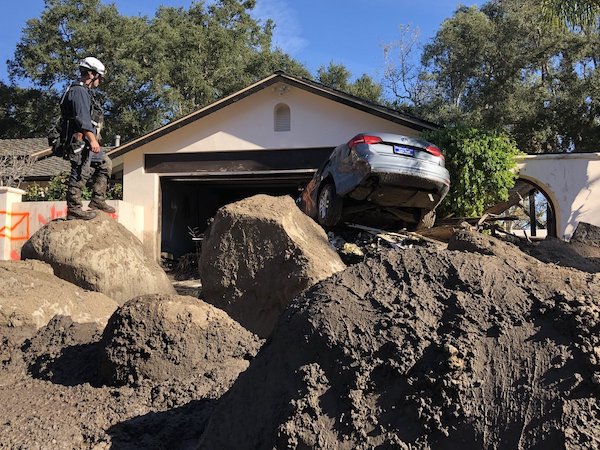 All areas SOUTH of Hwy 192 to the ocean:
EAST of Summit Rd/Hot Springs Road/Channel Drive and WEST of Sycamore Canyon Rd/Hot Springs/Olive Mill.

See evacuation areas on this map.

People in these areas should stay alert to changing conditions and be prepared to leave immediately if the situation worsens. 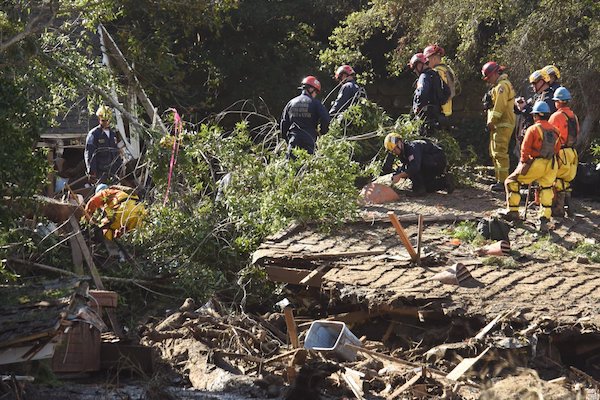 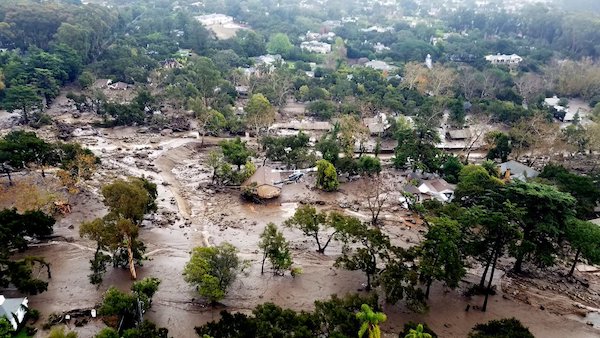 #CAstorm- The damage from mudflow is evident in the chapel at La Casa de Maria in Montecito following the heavy rainfall early Tuesday. pic.twitter.com/39mtWGFGvO

Caltrans announced they do not have a timetable for when SR-192 will be open.

The Red Cross Shelter closed. Residents in need can visit Red Cross at the Local Assistance Center or by calling 2-1-1. Services for those currently in need of shelter services will continue to be provided on a one-on-one basis.

Animal shelters accepted at Earl Warren Showgrounds and the Humane Society, for assistance with large and small animals, call (805) 681-4332

Bottled water will be distributed at two locations from 8 a.m. to 8 p.m. daily. This water is only for Montecito District customers in need of water:

The boil water notice remains in effect for most customers of the Montecito Water District. The notice has been canceled for the Summerland area as described below:

An interactive map of this area is located at www.CountyofSB.org
Directions on how to boil or disinfect water: www.montecitowater.com

In order to protect the public’s health, the Santa Barbara County Health Officer has closed the ocean waters for public use until further notice. Ocean water at the following beaches will remain closed:

For donations and volunteer opportunities, please contact these organizations:

#CAstorm- With water levels receding, a vehicle is shown that was wrapped and tangled around a tree by the force of deadly flood waters and mudflow on Hot Springs Road in Montecito. In the background are homes that were completely destroyed. pic.twitter.com/w3lp7bokhf

Fire personnel has confirmed that at least 8 people were killed in the Montecito mudslides with at least 25 injured on Tuesday.

Many people are sheltering in place in their homes until they're able to evacuate. All affected areas will be checked three times by rescue personnel for casualties or missing people.

Representatives of Cottage Hospital stated their Level 1 Trauma Center has been designed to handle a large-scale disaster. They were thankfully double staffed at the time of the event as a shift change was just occurring. Approximately 1,377 physicians, volunteers, and staff are on hand to help those who are injured.

Due to the recent flu epidemic, they're asking people who have flu symptoms to determine if they're sick enough for the hospital. If not, please stay at home to make room for people with more severe injuries related to the storm. 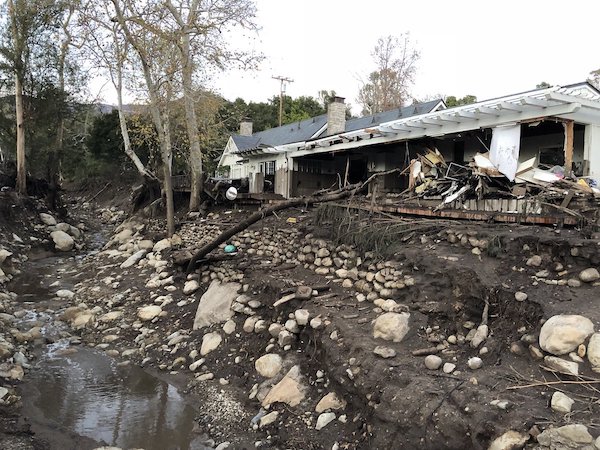 At a live press conference on Tuesday afternoon, Santa Barbara County Sheriff Bill Brown stated the main goal for first responders is to look for people who may still be alive and are injured. "We are heartbroken for the loss of life," said Sheriff Brown. They will release the information about the victims once they have been positively identified with the next of kin notified. A list of missing people will be released once all the information is available.

Many people are still trapped in their homes or neighborhoods as roads are inaccessible, but they are reportedly unharmed. Anyone who is in trapped and in danger must call 911 immediately to be rescued. Approximately 300 people that were trapped in the Romero Canyon area have been evacuated.

#CAstorm- A damaged home off Olive Mill Road in Montecito is shown with receding flood waters still flowing past, as SB County Sheriffs Deputies are staged to assist with rescue/recovery efforts if needed. pic.twitter.com/TLLPDiLeRy

Emergency dispatchers handled more than 600 calls between the hours of 3 a.m. - 6 a.m. on Tuesday. Many calls were of people in distress, stranded, and needing immediate rescue. When the daylight came, it "looked like a World War I battlefield," said Sheriff Brown. Knee-deep mud, debris, downed trees and power lines, with lots of obstacles and challenges for rescue personnel.

The Montecito area is now being called an "Active Rescue Zone." Sheriff Brown warned people to steer clear of the area and if people who are unauthorized are found in the area, they will be violating the law and guilty of a misdemeanor that will be enforced.

Many questions at the press conference were directed at the areas designated as mandatory or voluntary evacuations and why the mudslides occurred in areas that officials did not expect. Sheriff Brown answered "this isn't an exact science" and that a team from various agencies gave their "best guess estimate' as to where this would occur and that they were right. He stated they cannot determine the exact house or block that would be directly impacted.

"We do not take evacuation orders lightly," said Brown. "A lot of people chose not to evacuate and stay in place." When reporters asked why people didn't evacuate, Brown said he felt many were frustrated from the extended Thomas Fire evacuations and they probably thought the mudslides weren't going to be a problem, but it was.

#CAstorm- Damage to guest cottages at the storied San Ysidro Ranch in Montecito due to deadly mudflow from overnight heavy rain. pic.twitter.com/AJbjxxEdBN

The below video, captured by Mike Eliason, depicts rescue crews pulling a 14-year-old girl out of the debris in Montecito home where she was trapped for hours.

#CAStorm - Firefighters rescue a girl who was trapped in Montecito following heavy rain and mudflow in the 300 block of Hot Springs Road. pic.twitter.com/tfUw0cDbXx 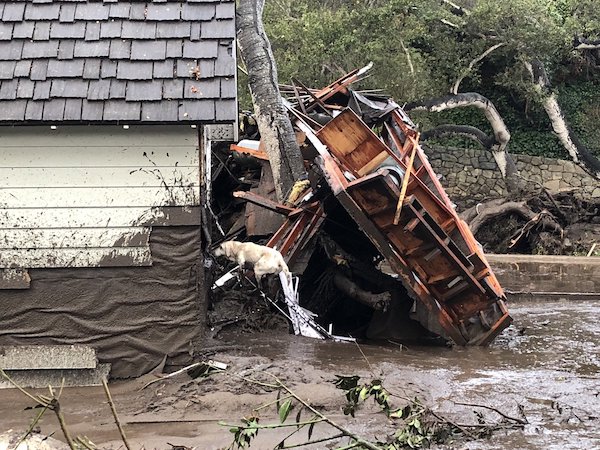 Many of these areas were under mandatory or voluntary evacuations as of Monday afternoon. Many people chose to leave, some chose to shelter in place.

The power is out in Montecito and surrounding areas of Santa Barbara, transformers and gas lines have been repeatedly breaking. Around 4:00 a.m. on Tuesday, a suspected gas line rupture is believed to set a home on fire on Park Lane.

Highway 101 has been closed between Montecito and Ventura for numerous debris flow and flooding on the road.

#CAstorm- Santa Barbara County Firefighter’s use a search dog to look for victims where multiple homes once stood in Montecito following flooding due to heavy rain. pic.twitter.com/xZcI4PNmej

#CAstorm- Scene from the 300 block of Hot Springs Road in Montecito following debris and mud flow due to heavy rain. pic.twitter.com/L8KkHdlQVQ

If you're going to bother

Sources for JayKay's quote (I

Do you want the customer to

Those were three different

that really was a very odd

The virus is coming for us

To everyone who thinks that

5g is to the simple minded