Mike Pahos, 90, told his family that he was “the luckiest man alive,” shortly before he passed away on February 7 at  Cottage Hospital. 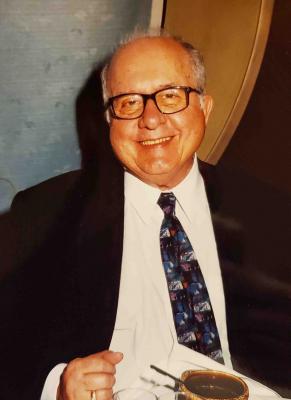 Born on August 3, 1929 to Greek immigrants Theoharris and Mary Pahos, Mike was raised in Chicago. During the Korean War, he was drafted but spent his entire military career in Germany. When the family sold their Greek diner and left the Midwest for Southern California, Mike followed. He enrolled at UCLA then transferred to UC Berkeley, where he earned a degree in landscape architecture.

While in Berkeley, he met the love of his life, Vivian, a Greek-American flight attendant for Pan Am. They married in 1959 and when Mike was offered a job with California State Parks they moved to Santa Barbara in 1960. Mike had a long and storied career as a fierce advocate for parks—including a stint as Santa Barbara City Parks director and as County Parks Director from 1972 to 1994.

A pillar of St. Barbara Greek Orthodox Church, Mike was instrumental in building the new church on San Antonio Creek Road. As the longtime director of the Santa Barbara Greek Festival, he grew the annual event from a small celebration to one of the most popular and enduring ethnic festivals in California.

Mike loved to sing: every Sunday in the church choir; with the Santa Barbara Choral Society and his fellow singers who traveled the world and sang in many of Europe’s fine concert hall; with the Holly Berries, a quartet of Victorian-costumed carolers who entertained throughout town during the holiday season.

Memorial donations to St. Barbara Greek Orthodox Church or the Santa Barbara Choral Society are preferred in lieu of flowers.

Toggle Comments (Show)
Mike Pahos
Mike was a fervent and capable advocate for the public's right to well maintained and accessible County parks. He went head to head with administrators over budgets, and didn't mind be considered "unreasonable" as long as he was able to fund projects he and his staff felt were necessary. He helped to establish the Cachuma Lake Enterprise Fund, which enabled that park to be self sustaining and more responsible to public needs and wants. His contributions to the community were also substantial. And he managed to do all this with a smile, a good sense of humor and kindness. A remarkable man who helped make Santa Barbara County even more special.
Mike Pahos
A good Man, Rest in Peace Mike.
Please Login or Register to comment on this.

I think people are taking it

BOLO Male who attempted to

Not really sure why people

PHD Santa Barbara are not

Thank you to the Goodbank!