An extra-large SUV pulled up on State Street while fans screamed as Pitt stepped out of the vehicle and waved to fans. He spent a good amount of time moving from one end of the barricades to the other signing autographs and taking selfies.

Pitt posed for a photo with Thepo Tulku holding a Seven Years in Tibet film poster. Tulku, a native of Tibet,  is the co-founder of the Santa Barbara Summit for Tibet, trained in the Ganden Shartse Monastery and has served as a special cultural advisor for the Smithsonian Institution Tibetan Library. 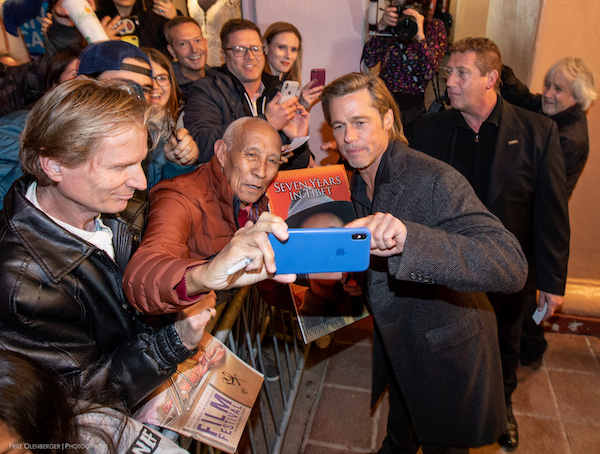 SBIFF honored Pitt with the Maltin Modern Master Award for his long-standing contributions to the film industry, most recently gracing the silver screen in Quentin Tarantino's Once Upon a Time... in Hollywood from Columbia Pictures and Ad Astra from New Regency.

The evening featured a one-on-one discussion between Pitt and acclaimed film critic Leonard Maltin, who returned for his 29th year to moderate the evening. The two discussed Pitt's history as they looked back at his iconic career - first as a University of Missouri journalism student, inspired by "All the President's Men,” who dropped out before graduation to move to Los Angeles. The tribute also featured a slew of clips from Pitt’s film accolades, including Thelma & Louise, Interview with a Vampire, The Curious Case of Benjamin Button, Fight Club, Inglourious Basterds, Burn After Reading, 12 Years a Slave, Once Upon a Time... in Hollywood, and others.

To many cheers from the crowd, Pitt mentioned his love of the Santa Barbara area. "You guys don’t know this, but I hang out here a lot. I have been in Goleta since 1999. This is home,” he said. Pitt owns an estate near El Capitan State Beach. 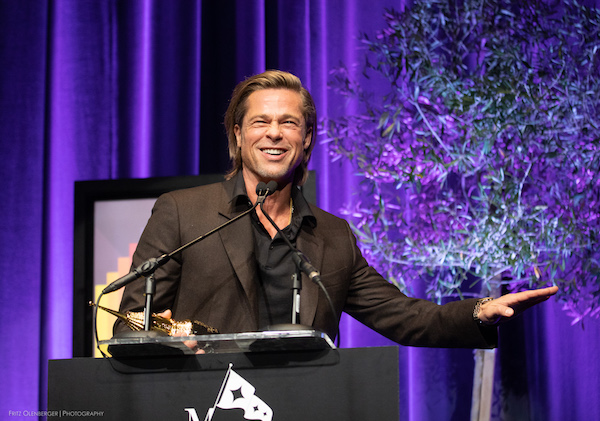 In the early part of his career, Pitt talked about trying to earn his SAG card but he needed a line in a film in some produced piece of work. So he decided to try adding an unsolicited line while playing a waiter in a Charlie Sheen film. "I thought, I’m going to try it, and so I went, 'Would you like anything else?' And I heard the first assistant director go 'Cut! Cut! Cut!'  And he said, 'If you pull that again, you’re out of here.' So I didn’t get [the SAG card] then," he said.

For a surprise to many, Pitt discussed turning down the famous role of Neo in The Matrix which was played by Keanu Reeves. “I did pass on The Matrix. I took the red pill. That’s the only one I’m naming … I wasn’t offered two or three. Only the first one. Just to clarify that. I come from a place, maybe it’s my upbringing, if I didn’t get it, then it wasn’t mine. I really believe [the role] was never mine. It’s not mine. It was someone else’s and they go and make it. I really do believe in that. If we were doing a show on the great movies I’ve passed on, we would need two nights,” he said.

He talked about the stress of playing an Irish gypsie in Snatch and struggling with the accent and dialogue until it clicked that his character is not supposed to be understood. And he found the music and rhythm to the language. He then talked about how he had to pressure Sam Rockwell to join him in Snatch.

Pitt was presented his award by Director David Fincher, who worked with him in the acclaimed films Seven, Fight Club and The Curious Case of Benjamin Button.

“The task of acting is multi-faceted. There’s the grand overriding two-hour arch that one might call the performance. There are the subtle behavioral hints at a lifetime of backstory, often referred to as the characterization. And then, there is the moment. And that is the character at rest. A person, idling. And for me, this is the test. The ultimate challenge. No intention. No witty banter. No dramatic change of trajectory. You just roll the camera and be. And this is the gift to your film that Brad Pitt brings. Like a supple suede jacket, he form fits his characters to the overall narrative and he shows up for more than the big beats. He idles smoothly at 3,000 RPMs in the most fractal of moments. Between speeches. Between stunts. Between moments that most actors actually choose a role for...so few people in the history of movies have been good at this, that we annex them to a special tier. People like Bogart, or Cary Grant or Jimmy Stewart or Paul Newman. They exist on celluloid in a way that mere mortals can’t. They have a comfort and ease that cannot be faked, or sadly, duplicated. And they are as rare as albino pandas. They are movie stars. And this is one of them,” said Fincher. 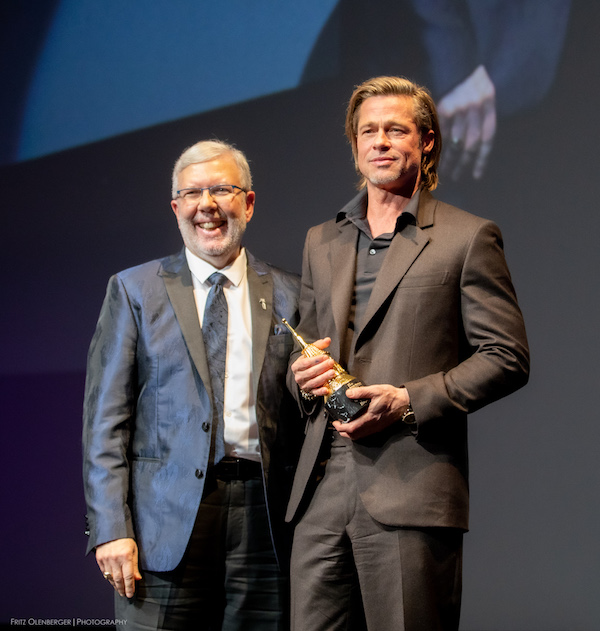 Pitt graciously accepted his award and joked about his age. "Wow, it's things like this and nights like these that tell me I'm old. I've been around a while and I've been doing this for a bit … I can't do night shoots anymore, and I'll gladly hand a stunt over to a stunt man. I no longer remember the first rule of Fight Club. But it's also nights like this where I get to look back and feel really, really blessed. I feel so fortunate to all the amazing people I've been able to work with who have taught me so much and who've touched my life. From editors and composers and amazing directors who have sent me on a trajectory that has meant so much to me... I feel really blessed to be here and I feel grateful for this,” he said.

The Modern Master Award was established in 1995 and is the highest accolade presented by SBIFF. Created to honor an individual who has enriched our culture through accomplishments in the motion picture industry, it was re-named the Maltin Modern Master Award in 2015 in honor of long-time SBIFF moderator and renowned film critic Leonard Maltin.  Past recipients include Glenn Close, Denzel Washington, Michael Keaton, Bruce Dern, Ben Affleck, Christopher Plummer, Christopher Nolan, James Cameron, Clint Eastwood, Cate Blanchett, Will Smith, George Clooney and Peter Jackson.

Wish I was there,’

Legends of the fall, one of my favorites

It was awesome! He was affable, self-effacing, super funny and delightful. Love this man!