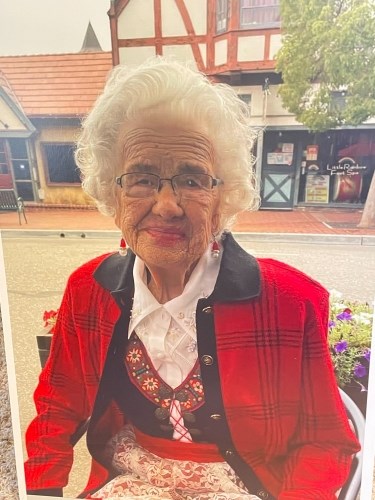 Life was difficult in Minnesota, so the children started to move to the Danish community of Solvang. Ivo was 16, Margaret was 17, and Emery was 19. They sent money back home when they could. Emery got a job in a dairy and the girls got jobs in Santa Barbara as maids. Every Thursday and every other Sunday there were dances in Solvang at Atterdag College. Then, when Lucille was 15, she got on the train with her lunch and $5.00 and set off for Solvang. When she arrived they picked her up and took her to the Sunday dance where she met and danced with Viggo (Vic) Wulff. She worked with Ivo on the Jacobsen dairy. Then she became a maid in Hope Ranch in Santa Barbara. After she worked there awhile, the woman asked her to cook. She said she didnt know how to cook, so her employer gave her a cookbook. Lucille became a very good cook, and one year she got an award for being the best cook in Santa Ynez Valley where they lived.

Lucille and Vic dated for 6 years and married in Las Vegas on Feb. 15, 1942. In humor, Vic often said it was the biggest gamble of his life. Vic worked for the shipyard during the war, and Lucille worked for the Air Force under contract, and they farmed in Rolling Hills.

Lucille and Vic had two sons: Alfred Earl Wulff and Eric Alan Wullf. They moved back to Santa Ynez in 1954 and farmed the Mitchell ranch together. Some of the many jobs Lucille had were: waitress, bookkeeper at the Red Barn, bookkeeper and teller at the bank, assistant and bookkeeper for cattle rancher Cornelius. She also did the banking for Bethania Church and kept the Christmas fund for Atterdag Village. She was very good with money and a hard worker; she was a woman who you could trust.

The most important thing to Vic and Lucille was family. They had many relatives living in Solvang, and frequent dinners were held at their home. She loved to cook and set a beautiful table. Two things she was famous for were her Peanut Clusters and Bacon Crackers.

Lucille loved to work in her beautiful garden and excelled at flower arrangements. After Vic died she worked hard in the garden. When we went to see her, she said she was working hard and thought about moving up to Atterdag because she was lonely and her gardening was not as satisfying as before. She did make the move in 2002. Everyone at Atterdag loved her and she loved them. She took an active role in all of the events and loved their many parties. She dressed up and put on her jewelry every day. She had costumes for every holiday.

Lucille and Vic loved their boys, Alfred and Eric, and were so proud of them.

Eric was married to Jeanette Jenkins. They have two daughters (Carolina and Tami) and one son (Rob). Carolina Aguirre, whose partner is Doc Gumfrey, has lived in Wyoming for over 20 years. Carolina has two sons Santiago and Miguel and 6 grandchildren. Their son Rob lives in Santa Ynez and is a plumber with Smith Electric. He and his former wife, Jeannie Halverson, have two daughters Kaylee and Kasey. Tami married Richard Myer and has two children, Skyler and Torin. She has a great job and they live in Illinois. Eric and Betty Elings Wells have been together for 26 years and come to Solvang every weekend except when traveling. They both loved Vic, who died in 2000, and Lucille, who was a mother to both Eric and Betty.

Can someone please explain how 10 year old kids are allowed to drive fully functional motorcycles on city streets and sidewalks?

Santa Barbara-based nonprofit, Equal Learning Fund, aims to create a world where education is available for all.

Pop-star and lead in the musical "Grease," Olivia Newton John, passed away at her home on Monday at the age of 73.

The Santa Barbara Police Department reports there were no serious criminal matters that occurred directly related to the Fiesta celebration within city limits.

Red Rock is a fun but a challenging hike to lead and Sierra Club Outings Chair Alejandro led a Sierra Club hike there a few weeks ago.

Hillary Hauser never set out to be known as the savior of our coastline, that’s just how things worked out.