Edhat readers share their photos, videos, and reports from the intense storm that hit Santa Barbara on March 5, 2019. See them all below!

Lightning strikes in the skies above Santa Barbara, CA, March 5, 2019, as seen in these views from Stearns Wharf. 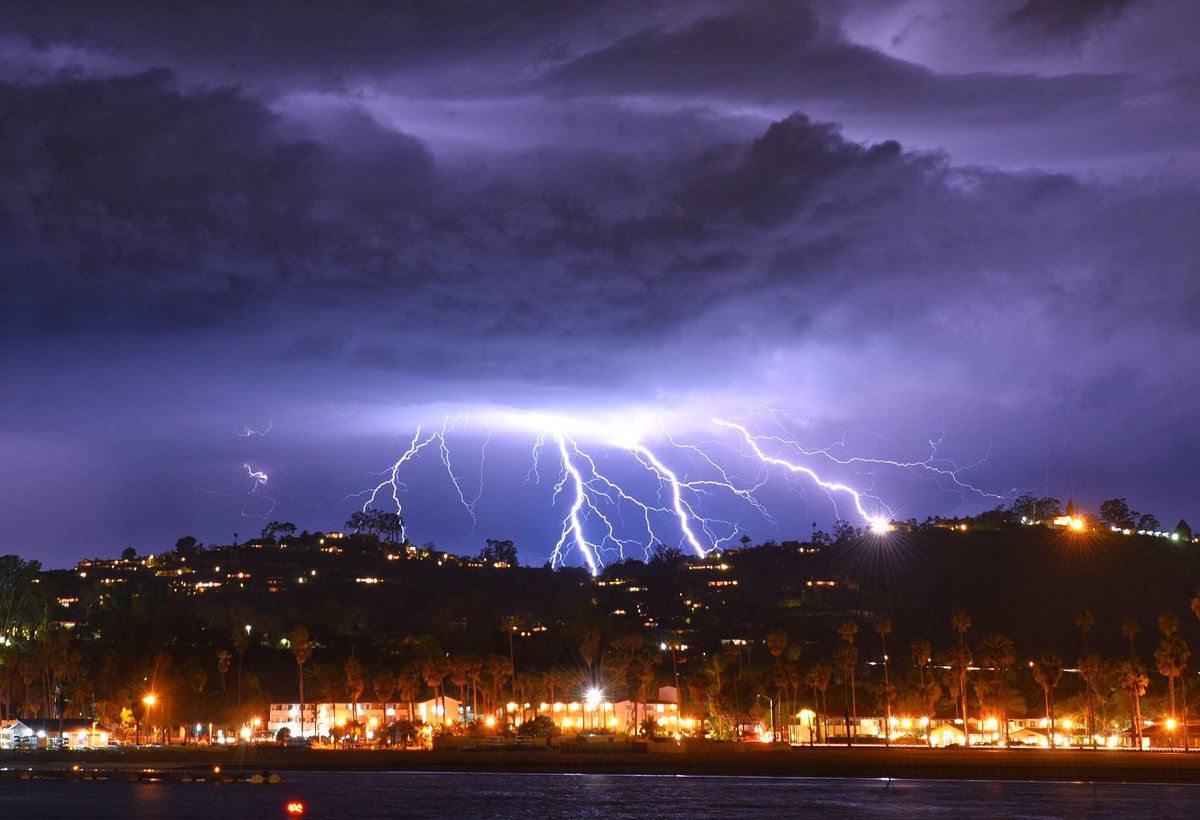 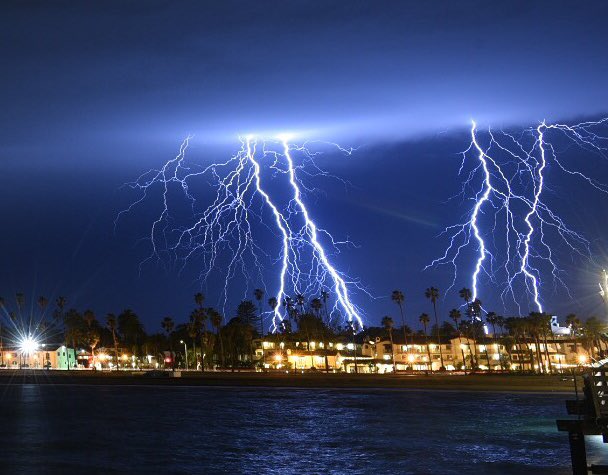 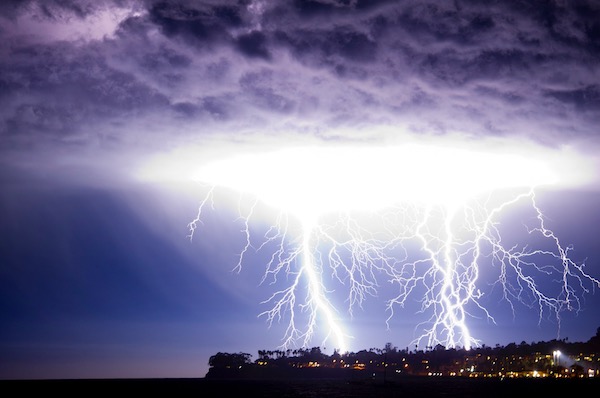 We set up a tripod on the roof and took a few hundred pics and selected the best to give to you. I am 12 years old and love photography. 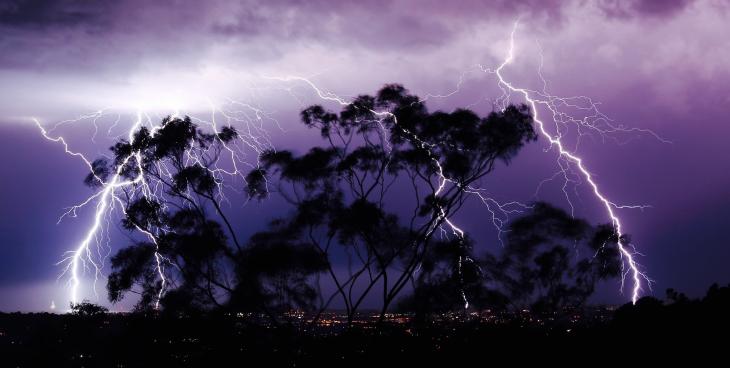 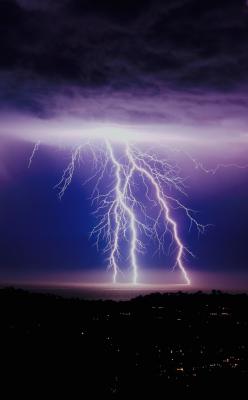 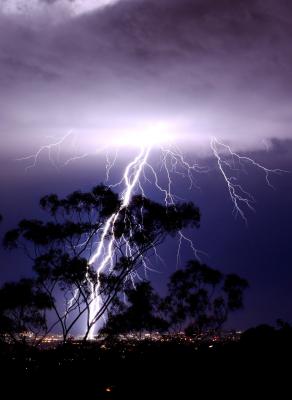 By Sophie Cameron (daughter of HolaZola)

Lightning In Paradise, so photos shot from Goleta. 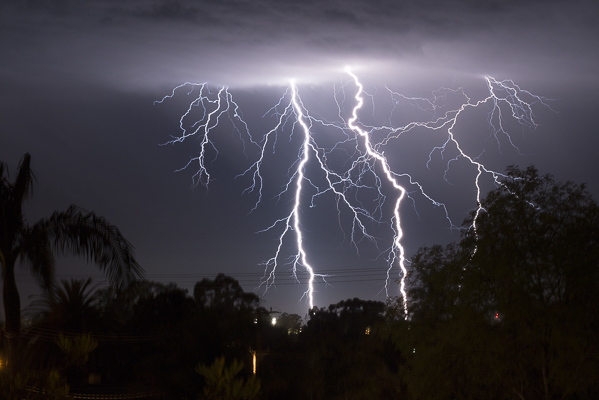 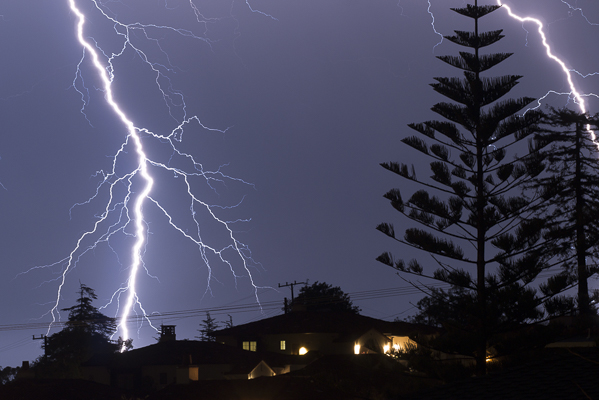 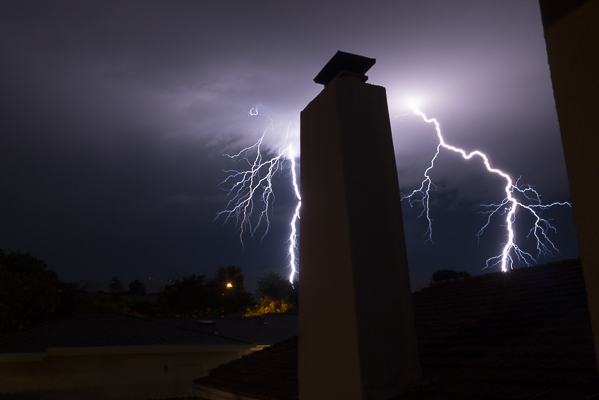 Captured from the top of Old San Marcos. 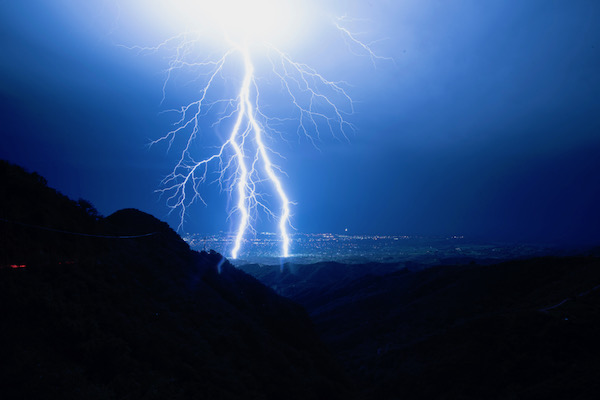 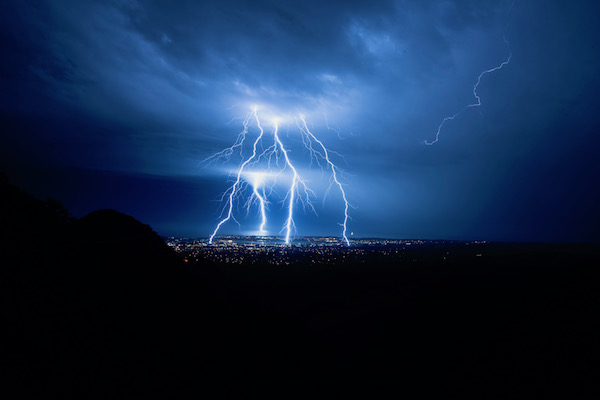 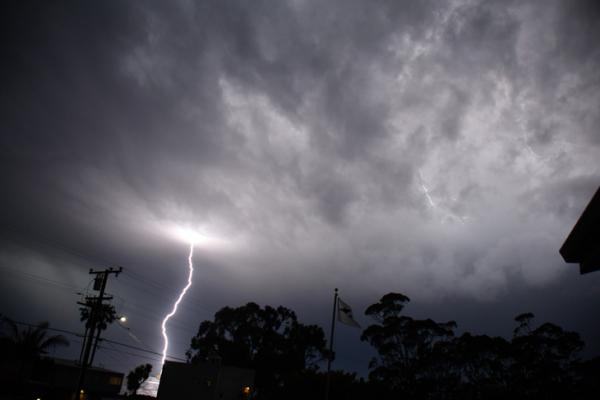 My little doggy is keeping herself buried under her blanket. I haven’t checked on my cats. One of them is a permanent scaredy-cat so she probably hasn’t moved from under the bed where she spends a lot of her life.

I wonder if they do have cat tonics. Seriously tho, hope you both come thru this ok and that tomorrow dawns bright and calm.

The National Weather Service in OXNARD has issued a

* At 904 PM PST, Doppler radar indicated thunderstorms with very
heavy rain with rates up to near 0.20 inches in 7 minutes about to
move into the Thomas burn area. Flash flooding and debris flows
are expected to begin shortly.

* Some locations that will experience flooding include...
The Thomas Burn area including M

I second Two Scoops Motion. Get to a safe place while you still can if you are in a debris flow zone. There are still strong bands offshore coming our way.

Amazing display! We saw a bolt of lightning hit a palm tree on Hollister next to Big Brand Tires - It looked like a Roman Candle! Thanks for posting such great photo's.

Ouch, your ears! Same happened to me once, about 3 houses away. How the walls shook!

Hope the relatively brief squalls we've been seeing here ([email protected]) are similar elsewhere, and that we don't see longer or even heavier ones as the night unfolds. So far that looks to be the case on radar... (fingers crossed)

THAT was another good one. Just when you think it's over...

Ooh, Right on the coast! The inherent, mind-boggling power of lightning is further illustrated when you compare the distance away and effect you see and hear and feel.

TO/Malibu getting some too, according to lightning map.

Really heavy rain in the Upper East now. This seems like a debris flow scenario. I hope not.

We need to stay vigilant, but all the info I'm seeing seems to indicate we may be through the most intense rain. Does anyone have current sources showing otherwise?

I'm just following everything that's been linked here & hoping for best for burn scar areas and residents. Not sure what to think of this NWS forecast for Montecito (MONTECITO #2 (MOIC1)): "Showers and possibly a thunderstorm. Some of the storms could produce heavy rainfall."
Of course all the warnings and watches are highlighted! I just got a kick out of "possibly a thunderstorm."

You may be right. At https://rain.cosbpw.net the rain gauges above Montecito show less the 0.2”/hr accumulation rate, so hopefully we’ll all dodge a bullet tonight as a community

That was about 9 audible strikes in less than 20 seconds... No accompanying downpours though. Windy forecast about a half inch between midnight and 3 a.m.

Somewhat abysmal warning. Sure would be nice if NWS told us WHERE, as Thomas burn scar spans two counties and is 440 square miles, according to online information.

LA Times posted at 10:45: "A band of thunderstorms that stretched from southern Kern County past the Channel Islands was producing a dramatic lightning show Tuesday night in the Southern California sky.
In one five-minute stretch alone, shortly after 8 p.m., the National Weather Service recorded 1,489 pulses of lightning off the coast, 231 over Santa Barbara County and 40 in Los Angeles County, said Kathy Hoxsie, a meteorologist with the weather service in Oxnard.

Those numbers appeared to taper off later Tuesday evening. The storms were expected to move into Ventura and Los Angeles counties overnight. https://www.latimes.com/local/lanow/la-me-ln-socal-lightning-20190305-story.html

OK heads up. Longer period of moderately heavy rain coming ashore now. Though less intense than the brief earlier squalls, this one might dump enough rain to cause problems. Especially since so much rain has already come down tonight. This squall is intensifying as it encounters the South facing slopes so up in the burn scar it could start getting ugly. Anyone have other resources indicating how this is going to unfold in the next hour or so?

It just now picked up here, I'm near Hope & Foothill. Haven't looked at radar in a while. But with such large differentials within a few miles, we need to hear from people with serious meteorological equipment -- or live reports from Montecito. Nothing we can do. I hope, but don't believe in thoughts & prayers. ;-) I only know of the websites listed here.

and I had no earlier rain squalls, was surprised not to during about 3 hours of lightning.

Radar looks like one more weaker band is headed our way. Have we dodged the bullet?

County site is only showing half an inch in the heaviest rain area of the Thomas burn (above Carp). Heaviest stream flow is Montecito Creek at 57cfs. The gMaps traffic view shows 101 going well with several slow areas but no closures on 154. CHP only shows Northbound onramps closed between Padaro and San Ysidro -in case- of flooding. Dare we hope that the mountain will stay in place?

That was the conclusion I came to. I sure hope so!

Now 1.39. I think that we did dodge a bullet. No reason to monitor closely, I tell myself), many reasons to take precautions. But watching live map of lightning was so cool!

There sure were a lot of people pulled over on the side of the road watching the show tonight along Sandpiper golf course and Cathedral Oaks. The Daily Nexus posted a nice photo that *looks* like a lightning strike on an oil platform.

Radar looks like one more weaker band is headed our way. Have we dodged the bullet?

You okay, John? This appears to be an auto-repeat.

Latest satellite water vapor and IR show the next hour and some to probably be the last of the strong rain.

Need to add that intensities look to be on low side.

That larger band has arrived [email protected] now and it's strengthened some. Time to check resources again...

Pretty strong radar returns over in the valley too, so this might help with Cachuma levels.

Flow rate at lower Montecito Ck is now up at 63cfs, and the East end of Cachuma is getting 660cfs with the lake now at 65.7% (hope that brings it up a percent or two by morning).

Reports I saw before today said midnight to 3 a.m. might be the most intense. We'll see. Water vapor & IR? Am I missing some sites? I only know of what's been mentioned on this thread today -- oh. I'm not good at exploring tabs and levels. Nice to see you.

Rate is just now easing up here [email protected] so my sense is the burn areas will ease up in the next half hour or so. Even though the soil's saturated, rates on the county sensors seem to be all below 1/3"/hour. If it doesn't intensify strongly we might be ok. So far this band has gotten a bit stronger coming onshore, but is apparently fairly high because it rains all the way to the San Rafael & Sierra Madre ranges. SBA is reporting light rain right now, ceiling at 5k'. Just while typing this the rain here has eased to light. I'm smiling, and feeling sleepy now. Thanks for joining the late watch YinYang. :)

A reader is asking for recommendations of a local architectural design firm for converting a garage to a living space.

[Update]: One person was killed in a single-vehicle rollover collision on Highway 246 in the Drum Canyon area on Thursday evening.

Roger reports a deer was hit by a vehicle in the 1300 block of Sycamore Canyon Road.

The Santa Barbara Unified School District Board unanimously voted this week on a contract with Engie Systems for Solar Microgrids at six school sites and standalone solar at another eight sites.

Work to remove leftover contaminants from the Ellwood Marine Terminal tanks and associated pipelines is underway and anticipated to end early next week.