The Dragon Tree is unlike any other tree that you might see -  strikingly exotic and otherworldly in appearance.

Formerly planted as a remarkable “must- have” specimen on the grounds of large estates, botanical gardens and parks, it has found new popularity in today’s landscapes, because of its tolerance of extreme heat and drought and its low-maintenance needs.

It was first imported into the Santa Barbara area in the late 1800’s.  Two stately specimens that were planted here during that time still stand in local private gardens;  these have been formally recognized as the largest of the species in California!

Because it has been enjoyed all over the world in climates that are appropriate for it, the Dragon Tree received the Royal Horticultural Society's prestigious Award of Garden Merit in 2002.

The Dragon Tree is an evergreen that grows slowly to maturity.  It will require considerable patience on the part of the owner.  However, such patience will be rewarded, as it can become an impressive, massive, tree. 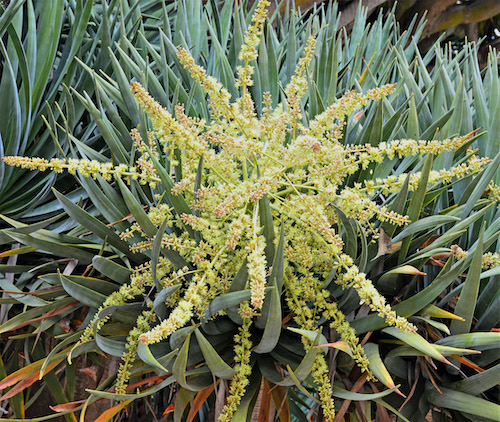 Interestingly, it will sprout from seed and develop for five to ten years as simply a single thin trunk (5- to 8-feet in height).  From the top of the trunk (the epical meristem), a short tuft or rosette of bluish-green, sword-shaped, leaves (up to 2-feet long by 1½ inch wide) will grow.  Only after that initial growth period is over will the tree show its first display of flowers.  When the flowers go to seed, the leaves drop off and the epical meristem dies.  Following that, two branches will emerge, Y-shaped, from under the bark on either side of the old epical meristem.  These sausage-shaped branches will each develop their own leaf tufts at their own epical meristems.  This curious growth pattern continues for the life of the tree, slowly resulting in an increasingly Y-branched form - an amazingly intricate pattern of stout branches that holds up the tree’s umbrella-like canopy.

The Dragon Tree does have a widely variable growth habit;  sometimes reaching a height of 15- to 20-feet before first branching.  Locally, trees will usually grow to a total height of 20- to 25-feet tall with an equal spread.  Over a period of 100 years and given ideal conditions, they can grow to a height of 40 feet with a spread of 30 feet with a massive trunk up to 4 feet in diameter!

In May to July, branching inflorescence panicles (to 24-inches long) appear from within the tufts of leaves.  These bear hundreds of tiny (1/3-inch long) creamy-white, fragrant, flowers.  The flowers are “perfect” meaning each has both male and female parts.  Bees find them irresistible.

After pollination, the flowers are followed by fleshy, round, berries (½ inches in diameter) that will be orange-red when ripe.  The fruit is considered inedible for humans.

The bark on the trunk of a young tree is smooth and a slightly shiny light-brown color.  With age, it becomes rough and grayish brown.  If the bark or the leaves are cut or bruised, a reddish resin oozes from the wound;  when this dries in clumps, it looks like clotted blood.  The red color comes from the flavonoids found in the sap.  The trunk will thicken substantially, in order to support the total weight of the heavy branches - and can develop arial roots that grow downwards to reach the ground, in order to provide lateral support.

The Dragon Tree is subtropical and is endemic to the Canary Islands off the coast of Spain in the Atlantic Ocean.  It is also native to western Morocco, where it is planted extensively as an ornamental.  Its populations in the Azores are thought to have been introduced there in the 1500’s.   Sadly, it is registered as endangered in the wild. 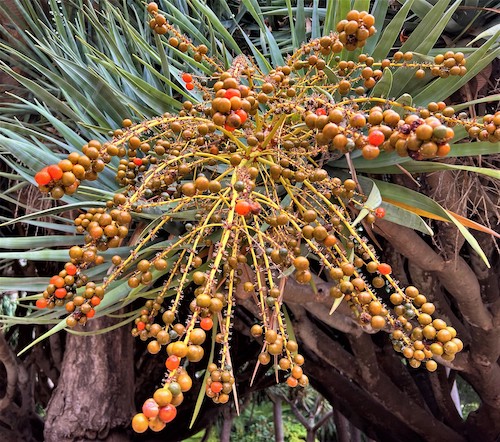 The Dragon Tree’s botanical name is Dracaena draco.  The genus name, Dracaena, comes from the Greek word, “drakaina”, meaning “female dragon”.  The specific epithet, draco, is the Latin word that also means “dragon”.  It is similar in appearance and often confused with its closest living relative, Dracaena cinnabari, from the Yemen island of Socotra.  Surprisingly, all Dracaena are classified as part of the asparagus plant family, Asparagaceae, along with agaves.

The common name of “Dragon Tree” is derived from the way its branches develop in a Y-shape, like the twin necks of the double-headed dragon told of in ancient Greek myths that described the exploits of the demi-god Hercules – he who killed the fierce dragon that guarded an orchard of apple trees bearing fruits of pure gold.  Its other common name is “Dragon’s Blood Tree” which refers to the blood-red sap.

Dragon Tree is a versatile landscape tree - but should be planted in a location that will accommodate its full size at maturity.  In addition to being extremely drought hardy, it is tolerant of heat, wind, and sea spray.  It is cold hardy to 20 degrees F.  Any irrigation should be deep and infrequent, as overwatering will kill the tree.  It prefers full sun but can take partial shade.  When propagated from seed, it can take three to four months to germinate.

In addition to landscaping, Dragon Tree has historically had many other uses.  Its resin was – and still is - an important element in traditional medicines, in religious rituals, and in incense.  It is prepared for use as a dye and, notably, as a varnish.  Beginning in the 17th century, Italian artisans varnished their violins and other string instruments with the resin, because it provided a vibrant color and helped preserve the wood. It has also been used in photoengraving.

Mature Dragon Trees can be seen in West Alameda Park (along Santa Barbara Street side), in the parking area of the Santa Barbara Mission, in the front yard of the Mount Calvary Monastery (on East Los Olivos Street, just north of the Mission), as a street tree in the 1st block of East Arrellaga Street, at Lotusland (in a magnificent grove called the Dracaena Circle), and in many private gardens about town.

In the docent training at Lotusland I learned about the Dracaena draco keeping its single stem until it blooms for the first time. I have one in my garden that is just now blooming for the first time. Looking forward to seeing how it develops after that. Very slow growing.

A couple of questions for David: I have always thought that the Dragon Tree looked like a succulent. Since it is a member of family Asparagaceae, does that mean that it is not a succulent? Also, is it technically a true "tree"? Thanx!

The Dragon Tree can be considered a succulent because it stores water in its branches and trunk. It is also a "proper" tree because it has a woody trunk that supports lateral branches above the ground. It is also a monocot, like a palm.

Favorite video of a hunter

When your texting and driving

speed limit there is what, 25