It is with great sadness that the Santa Barbara County Board of Supervisors learned of the sudden passing of former Fifth District Supervisor Joseph “Joe” P. Centeno over the weekend. Those who knew and worked with Joe describe him as a dedicated and tireless public servant for his district and the county. 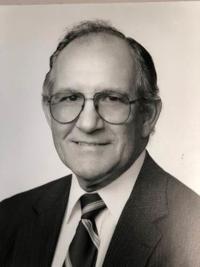 Centeno grew up in the Santa Maria Valley. In 1954 on his 21st birthday, Centeno joined the Santa Maria Police Department and was appointed chief in 1979. After his retirement in 1988, Centeno continued to serve the community as a Trustee at Allan Hancock College. He was elected to serve two consecutive terms on the Santa Maria City Council in 1994 and 1998, stepping into the role of mayor from 2000 to 2002.

In 2003, Centeno was elected to the serve on the County Board of Supervisors. He served two terms and retired at the end of his second term, marking the conclusion of a public service career of more than 50 years.

As testament to his lengthy career serving Santa Maria, in 2013 the county's Santa Maria government building at 511 E. Lakeside Parkway was named the Joseph Centeno Betteravia Government Building in his honor. At the dedication ceremony, Centeno said, “This is a very humbling experience for me. [sic] this beautiful place is done for the benefit of our great citizens who really need to have the support of our elected officials. I’m pleased that they’re going to be able to come to the board meetings and have a comfortable place to sit and become part of the discussion.”

Upon Centeno’s retirement from public service, Supervisor Steve Lavagnino was elected to serve the Fifth District. “Joe represented the Fifth District and the City of Santa Maria with distinction,” said Lavagnino. “First, as the Chief of Police, then as Mayor, and finally as Santa Barbara County’s Fifth District Supervisor. Joe put the people first, especially those who came from more humble circumstances. His commitment to a life of public service is an example to all of us.”

U.S. Congressman Salud Carbajal served with Centeno on the Board of Supervisors and said, "Joe and I developed a strong working relationship and friendship while we served together on the Santa Barbara County Board of Supervisors. Joe consistently demonstrated extraordinary leadership in his public service and worked tirelessly to improve the lives of his constituents. Some of my most fond memories of Joe were working with him to establish the Children’s Health Insurance Initiative for uninsured children in Santa Barbara County, build the Cuyama Pool, and partnering to support our agricultural industry. Joe was the epitome of a dedicated public servant who worked in a bipartisan way to improve our community. My thoughts are with his family and all who knew him during this difficult time."

While working and raising his family he attended night school, eventually earning a master’s degree and a Doctor of Education Completion Program in Public Administration (ABD; Online All But Dissertation).

Centeno was 86 at the time of his death. Former Supervisor Centeno will be missed by all those who worked with him and those he served. Supervisors and County staff alike send thoughts and deepest sympathies to his family at this time.

A lot of our current crop of public "servants" could learn a lesson in public service by following Joe's example.

SICKOF - You are what's wrong

The vaccinated are causing

Victim is in front of Amazon

Suspect is described as a

The purse has been retrieved

I have been a veterinary