[On Tuesday], the Forest Service issued final approval of a controversial project to cut trees and clear chaparral across 755 acres on Pine Mountain in the Ventura County backcountry. The decision comes despite over 16,000 comments of opposition that forest officials received from tribal groups, elected officials, organizations, businesses, and the general public.

The approval was issued using two loopholes that allow the Forest Service to bypass normal requirements to prepare an environmental assessment. Instead, officials only prepared a series of “specialist reports” that were not made available to the public until today and did not evaluate any alternatives or mitigation measures that would reduce or avoid damage caused by the devegetation project. The loopholes also allow the agency to move forward without offering any formal public objection or appeal opportunity to address concerns.

The project allows the use of heavy equipment to log live and dead trees up to two feet in diameter and clear rare old-growth chaparral along six miles of the prominent ridge known as Pine Mountain stretching from Highway 33 to Reyes Peak. Trees larger than two feet in diameter can also be removed under vague stipulations. A commercial timber sale would be allowed as part of the logging activities according to the decision.

Only an hour drive from Ojai, the area is a popular destination for campers, hikers, climbers, and other recreationists. The ridge is also home to some of the most diverse and unique habitats in the region. The forests and chaparral on Pine Mountain support more than 400 species of native plants as well as mountain lions, black bears, bobcats, mule deer, and numerous birds and small mammals. A recent study commissioned by Los Padres ForestWatch found multiple California spotted owls—one of the rarest owl species in California—near the project area. 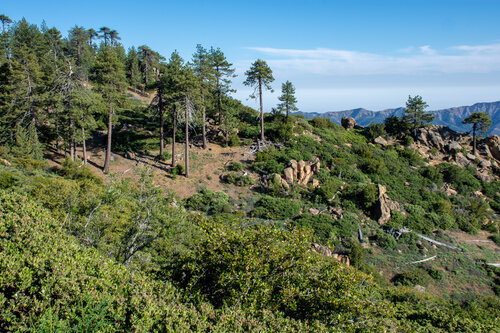 Ecotone between chaparral and mixed-conifer forest in the project area. Photo by Bryant Baker.

Since the proposal was released in May of last year, the Forest Service has received thousands of comments opposing the project. Multiple Indigenous groups, including the Coastal Band of the Chumash Nation, Barbareño/Ventureño Band of Mission Indians, and Wishtoyo Chumash Foundation, submitted letters opposing the project and the agency’s lack of environmental review for the proposed activities due to likely impacts on cultural sites and the environment.

The Forest Service also received letters from Representatives Salud Carbajal (CA-24) and Julia Brownley (CA-26) expressing concerns about the project and the agency’s lack of robust environmental review. In May 2021, the members of Congress also expressed their concerns to Agriculture Secretary Tom Vilsack, whose agency oversees the Forest Service. The members of Congress never received a response, despite the Biden administration’s pledge to conduct thorough environmental reviews, conserve land, and protect wildlife.

The Forest Service has approved the project without an environmental assessment while stating that the project will aid in wildfire mitigation. Despite numerous scientific studies that have shown remote vegetation removal projects to be ineffective in mitigating wildfires that cause the majority of fire-related damage to communities each year, the agency has claimed that logging and chaparral clearance deep in the backcountry will do just that. Similar projects that have been completed across national forests in northern California and southern Oregon did little to keep major wildfires like the Dixie Fire and Caldor Fire from burning down entire communities this year. 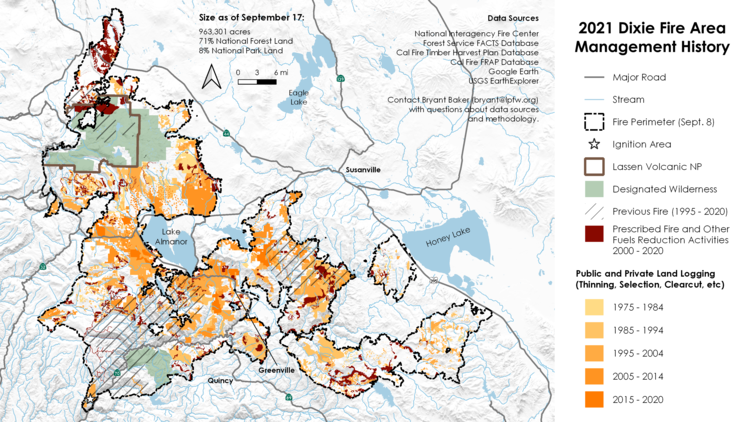 ForestWatch’s analysis of the Dixie Fire in northern California revealed that it burned through large swaths of forest that had been exposed to the same types of activities as those just approved on Pine Mountain.

Scientists and conservation organizations have long advocated that funding should be directed instead to creating defensible space directly next to homes, retrofitting and building structures with fire-safe materials, and reducing development in the wildland-urban interface. Areas where native trees and shrubs are removed with heavy equipment are also prone to being infested with non-native invasive plants that can increase wildfire risk.

A third of the project area is within two proposed additions to the Sespe Wilderness as part of the Central Coast Heritage Protection Act approved by the U.S. House of Representatives this year. The legislation would designate an area along part of the western portion of the ridge and an area that includes Reyes Peak, and it is currently awaiting a vote in the Senate.

As the project was approved using loopholes, the only option for organizations and members of the public to seek changes or reverse the decision is through the court system rather than through a formal objection process normally afforded with projects of this scale and scope. A team of organizations that submitted detailed comments on the project is currently reviewing legal options for altering the course of the project. The Pine Mountain decision is the third such logging project approval in as many years by Los Padres National Forest officials. Lawsuits over two earlier projects approved in 2018 and 2019, which would affect the Tecuya Ridge and Cuddy Valley areas of southern Kern County, are still being decided in court. The Forest Service plans to approve yet another logging proposal on Mt. Pinos early next year.

“Logging trees and clearing native shrubs on Pine Mountain puts wildlife at risk while failing to protect our communities from wildfire. This decision is yet another step in the wrong direction for the Los Padres National Forest, and it highlights the unwillingness of the Forest Service to listen to the public’s concerns.”

"The Forest Service's plan to destroy old growth chaparral and mixed coniferous forest for a low-priority fuel reduction project is nothing short of a thinly-veiled logging and timber project. This deceptive justification for deforestation will have severe impacts on the cultural sites and keystone species of Opnow and will threaten the survival of rare vegetation communities and sensitive and endangered wildlife that rely on chaparral/coniferous ecotones. For the protection of our cultural resources and our environment, this project cannot be allowed to proceed."

“As Native American people who have long standing and ancestral obligations to the land, water and creatures of this land, Coastal Band of the Chumash Nation (CBCN) continues to be concerned at the brazen actions of the Forest Service. Without a thoughtful EIS, we are concerned about the possible destruction and disturbance of archaeological and cultural sites as well as irreversible damage to living ecosystems within the project area. The practices the Forest Service has been using to manage the land are no longer relevant in this critical time of our history. They should not be allowed to keep doing what they have always done. Efforts should be made to utilize Indigenous knowledge and practices that take into account adapting to living in a fire-prone environment. The Forest Service tends to pursue a very aggressive program of logging, clearing out valuable chaparral along the way.”

"A growing body of scientific evidence finds that logging projects like this one typically increase fire intensity and make climate change worse, while damaging important wildlife habitat, and we can't afford that."

“This project violates the Forest Service’s obligation to protect unique opportunities for the public to experience nature, in this case, beautiful, old-growth chaparral. Once the grinding machines are finished clearing hundreds of feet of native chaparral habitat on either side of the road, visitors will be met with little more than a scarred landscape covered in wood chips and flammable weeds.”

“Not only is Pine Mountain important for our employees and customers because of its outdoor recreation opportunities, it’s also home to some of the most diverse and unique habitats in the Los Padres National Forest. Pine Mountain hosts the greatest diversity of coniferous tree species in Ventura County, which occur next to large expanses of rare old-growth chaparral. The Forest Service’s decision is a loss for all those who love this land and want to protect the environment.”

“Pine Mountain has been my favorite summer camping spot for 35 years. The wind in the pine trees, the giant sandstone boulders scattered among the conifer forest. This is a rare and treasured environment, mostly unaltered by man, at the high rim of the Sespe Wilderness. Condors may soar and perch above. The night sky shines bright. This is not a place to be callously logged.”

What's the LPNF's argument to do this?

The FS press release came out a couple days ago, also on EdHat:
https://www.edhat.com/news/los-padres-issues-decision-memo-for-reyes-peak-project

Maybe the feds figure that if they’ve already failed miserably, someone’s golf buddy might as well make money off of the scraps of forest that are left. Disgusting.

https://www.fs.usda.gov/about-agency/contact-us --------Please send an email comment and tell US Forest Service this is a really bad project. Keep your comments short and polite. Share the "contact us" link with friends and family.

Is this about SCE lack of maintenance? Does a small group of people benefit? This is very suspicious to do outside of evaluative channels unless some special entity benefits at a high cost to already squeezed wildlife, the environment, every other living thing including us. If it is beneficial, those who are making this decision should be able to prove it. It should be stopped immediately.

A sad day for the forest and concerned citizens. The LPNF has a tough job overseeing so much land - this could have been a great opportunity for them to work with the commenters on this proposal but they totally blew it. The Ventura County Board of Supervisors did vote 4-1 to send a letter to the LPNF stating that they oppose the project - kudos to them.

this is just over the top ridiculous no matter how one tries to defend this assault on our forest. Leave it alone. Let it be. Going up there and cutting down trees and raking the ground. SMH. I have spent so many nights, days, weeks up there through various conditions and seasons. This is wrong on so many levels. the mountain is fine. leave it alone.

"The Forest Service has approved the project without an environmental assessment while stating that the project will aid in wildfire mitigation. Despite numerous scientific studies that have shown remote vegetation removal projects to be ineffective..." <------ How does this happen? This is outrageous.

Is this political? It certainly isn't based on science.