The First Presbyterian Church of Santa Barbara celebrated its 150th Anniversary in 2019. Its first service was held on June 21, 1869, and after four different sanctuary locations, the 350-member church is still going strong at 21 East Constance Avenue in Santa Barbara.

On June 21 in 1869 in the adobe County Court House, 19 charter members were received into the First Presbyterian Church by The Reverend Thomas Fraser, the Presbyterian Synodical Missionary for the Pacific Coast. These first members were seeking worship and learning experiences in keeping with their reformed Presbyterian faith. A young seminarian, Rev. H. H. Dobbins, served the first two years, followed by eleven temporary pastors. The first installed pastor was Rev. Dr. Augustus Carrier in 1886.

This first era was when American settlers were arriving from the eastern part of the United States and developing homes, farms, businesses, and professions in the small, but growing population of 2,000 in the Santa Barbara community. The Gold Rush had run its course and the Civil War was over. 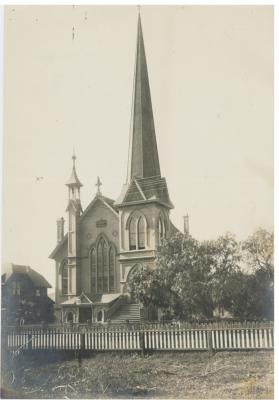 As the congregation grew, the homes and meeting places became inadequate, so just two years after the founding in 1871, the congregation built and moved into their own first house of worship on the corner of De la Vina and Ortega Streets (currently St. Francis Pet Hospital). This too proved to be too small and in 1875 the congregation marched to a new 400-seat church on State Street, on the west side of the 1200 block (currently the CVS store). It was a significant landmark with a 130 foot steeple that was a reference point for sailors at sea and surveyors on the land. In 1887 First Church helped found the El Montecito Presbyterian Church to serve those in the eastern part of the community.

Another era in church history was when the city and country were going through a boom & bust economic period and the church continued its growth and services to the congregation. The railroad had just arrived as had electricity, and the era was marked by the coming of the automobile and the airplane. The next pastor was Rev. Dr. Warren More in 1901, and the membership grew to 550.  During this time Santa Barbara had become a vacation destination for the wealthy, using the railroad as the means of travel. Hotels, resorts, hot springs and health facilities mushroomed as did large estates and farms.

During the First World War era, the congregation reached out to those in the service, and the Women’s Missionary Society was organized.  Again the church edifice proved unable to handle the increasing congregation, so a new larger sanctuary was built on Anapamu Street, one-half block east of State Street (across the street from the SB public library, at the current site of Ana’s and the former Coffeecat next to the City pocket park). The congregation marched to the new church in 1918. Dr. Clarence Spaulding began his ministry in 1919. The city’s population continued to increase during the 1920’s, and church membership grew to 1,000 and 800 in the Church School.

An era of disasters began in 1925 with the Earthquake which damaged the church, so the congregation met in the Alameda Parks and elsewhere until it was repaired. The Great Depression began in 1929 with economic hardship for many members, but the church served their needs. Rev. Dr Robert McLean was called in 1932, and the McLean Chapel with its stained glass windows was built in 1940 as a memorial to his wife. 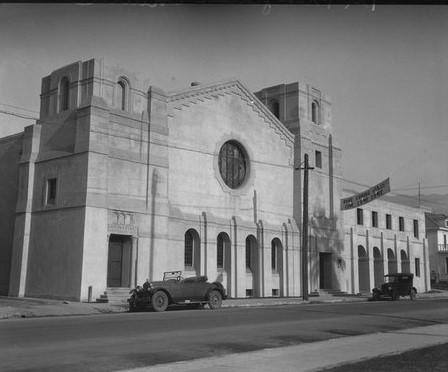 World War II began after the Pearl Harbor attack in 1941. Santa Barbara contributed to the war effort by housing a Marine Air Station in Goleta and an Army Hospital at Hoff Heights. Twenty-one church members served in the Armed Forces during this war. The next minister to be called was Rev. Dr Joseph Ewing in 1943.

The 1950’s brought a population boom with UCSB moving to Goleta, the airport opening, and construction of Cachuma Dam. The church added a Christian Education building on the corner of Anacapa and Anapamu Streets in 1951. Rev. Dr Lawrence Fisher was called in 1956, and the congregation grew to over 2,000 and the Church School to over 1,000. With the urbanization of the Goleta Valley, First Presbyterian Church helped organize two new congregations in 1959: St Andrew’s in the Hope Ranch area and Goleta Presbyterian Church.

The old Church building on Anapamu Street was no longer earthquake safe after 1925 and the City wanted the parking lot, so a 4.3 acre site was purchased on the corner of State and Constance Streets in 1966. A period of modernization began under the leadership of Dr. Fisher. The new buildings for the Church School and Church Office were finished in 1971, and the congregation marched up State Street to the new 800-seat sanctuary in 1973 with its stained glass windows, new organ, and ample parking. The Rev. Robert Pryor was called in 1981.

First Presbyterian Church opened one of the first infant care centers in Santa Barbara in 1982. Today the Early Childhood Center has approximately 85 spots for families needing infant care and early education for preschoolers. The center is NAEYC accredited (National Association Education of Young Children) and a certified Outdoor School.

Presbycamp was also started in the 1980’s and continues to offer several weeks of Christian summer day camp for elementary school youth to its members and the community. In 2017 a music week was added which is led by Minister of Music Erin Bonski Evans.

The building program was completed in 1999 with the completion of the Christian Fellowship Center, the Chapel of the Good Shepherd, and the Garden Room. Global concern was heightened with the terrorist attack on New York on September 11, 2001, and the subsequent wars in Afghanistan and Iraq. The congregation called Rev. Peter Buehler in 2002.

First Presbyterian Church has continued to send young people to seminary to prepare for service in mission and in pastoral ministry. It co-founded Transition House that serves homeless families, as well as volunteering for years at Santa Barbara Rescue Mission and Community Kitchen. The church continues to provide resources to the homeless, participating in the Safe Parking program and Freedom Warming Centers. Working with the American Red Cross (across the street), First Pres has provided shelter and evacuations space for fire and flood victims during wildfires, floods, and other disasters.

During the 1990’s First Pres developed an increased interest and giving to international missions, some that the Church has supported for 15 years or more. Missionaries are supported in Peru, Romania, Ukraine, Lebanon, Middle East, South Sudan, China, Thailand, Uganda, and Gaza, as well as multi-nation organizations, such as Lifewater International and  IMPACT of Santa Barbara Presbytery.

First Pres started the Santa Barbara Mission Conference in 2003, which has grown to a regional event that attracts over 300 attendees annually.

Pastor Peter Buehler retired in 2017. Reverend Charles Svendsen is currently serving as Interim Pastor and Erik Wiebe as Assistant Pastor managing the 45,000 square feet campus and the church’s many programs, including three Sunday church services, numerous missions in town as well as across the globe, infant care and pre-school programs, and the many non profits and musical groups that utilize the community facility.
This summer several events celebrated the milestone anniversary event.

On June 15, 2019 a faith walk and tour visited the various locations that have been home to First Presbyterian Church. Later, on June 21 200 people shared a meal and worship service to commemorate the anniversary of the first service in Santa Barbara.

I suspect that most interest

An interesting note about