The Alpha is an economical small satellite launch vehicle. Firefly had three educational payloads aboard and successfully inserted into an elliptical transfer orbit, coast to apogee, and performed a circularization burn.

Firefly Aerospace scrubbed their Friday launch from Vandenberg at the last minute.

It was scheduled to take place between midnight and 2:00 a.m. The countdown was taking place and around 12:50 a.m. all systems were go and launch was initiation. Just a few minutes later Firefly reported to abort at T-0.

"The vehicle went into auto abort after ignition. This is designed into the system to ensure safety. The team scrubbed tonight's launch attempt and is reviewing data to determine our next launch window," Firefly reported.

The next launch window is tentatively scheduled for Saturday morning.

After at several cancellations due to weather, Firefly Aerospace is planning to launch from Vandenberg after midnight on Friday.

"Alpha Flight 2: To The Black is Firefly’s second technology demonstration flight that will attempt to launch multiple satellites to low Earth orbit (LEO) from our launch site (SLC-2) at Vandenberg Space Force Base. Alpha will first insert into an elliptical transfer orbit, coast to apogee, and perform a circularization burn," Firefly states.

This will be Firefly's second rocket launch from Vandenberg Space Force Base after their first launch exploded over a year ago. The first launch exploded about 2 minutes and 30 seconds after launching, sending debris into the backyards of residential homes as far as Orcutt. There were no reported injuries.

The private rocket company stated the rocket had experienced an anomaly during the first stage ascent.

The second attempt was scheduled for September 11 and rescheduled to the following day due to a drop in helium pressure, then rescheduled two more times due to weather.

Firefly Alpha is designed to address the needs of the burgeoning small–satellite market.

Video of the launch can be seen below: 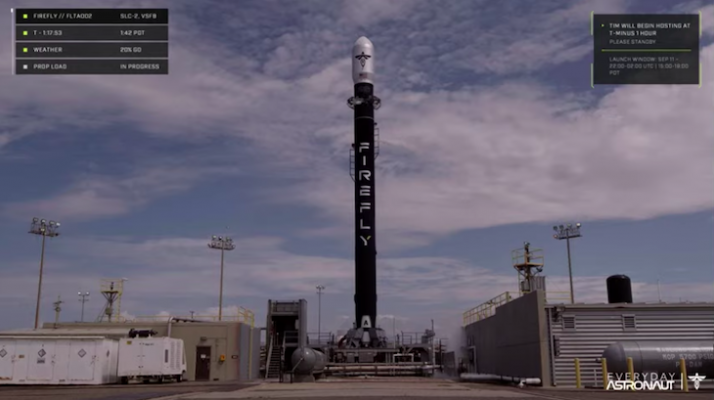 It appears that "Third time is a charm" did not apply this morning...
T-0 "Vehicle abort. Safing the vehicle." , I wasn't up to watch. Looked everywhere to see what happened, as nothing on the firefly site seemed to say what was going on? gleaned it here:
https://www.noozhawk.com/article/firefly_aerospace_rocket_remains_at_vandenberg_sfb_after_dramatic_abort

The Firefly Series didn’t get the luxury of being rescheduled. That was a fun show.

Well tonite the Launch was a Success!
Too bad it was so Foggy no one saw it around here. Congrats Firefly!

What is your estimate of the

That covers all the bases!

Movies Way Back When: War Dogs

The owners are really gouging