At approximately 9:50 a.m. this morning, February 5, 2019, a San Marcos High School student reported what appeared to be a man with a gun in a parking lot near the gym. The campus was immediately placed on lockdown. Sheriff’s deputies responded to the school within minutes and begin searching for the suspect who was described as a white male adult wearing a grey suit. A Santa Barbara County Sheriff/Fire Air Support helicopter responded as well as several K9 teams. Sheriff’s deputies secured a perimeter and were assisted by personnel from the UCSB Police Department, Santa Barbara Police Department and California Highway Patrol. The Sheriff’s Special Enforcement Team and Santa Barbara Police SWAT Team were also deployed.

Sheriff’s deputies worked closely with Santa Barbara Unified School District officials to ensure the students were safe. Within the hour, Sheriff’s deputies were able to contact the male subject and determine that he was not armed. The item he was seen holding was actually a radiator hose. He had innocently pulled into the parking lot when his car experienced mechanical problems. Once it was determined there was no threat, the lockdown was lifted. 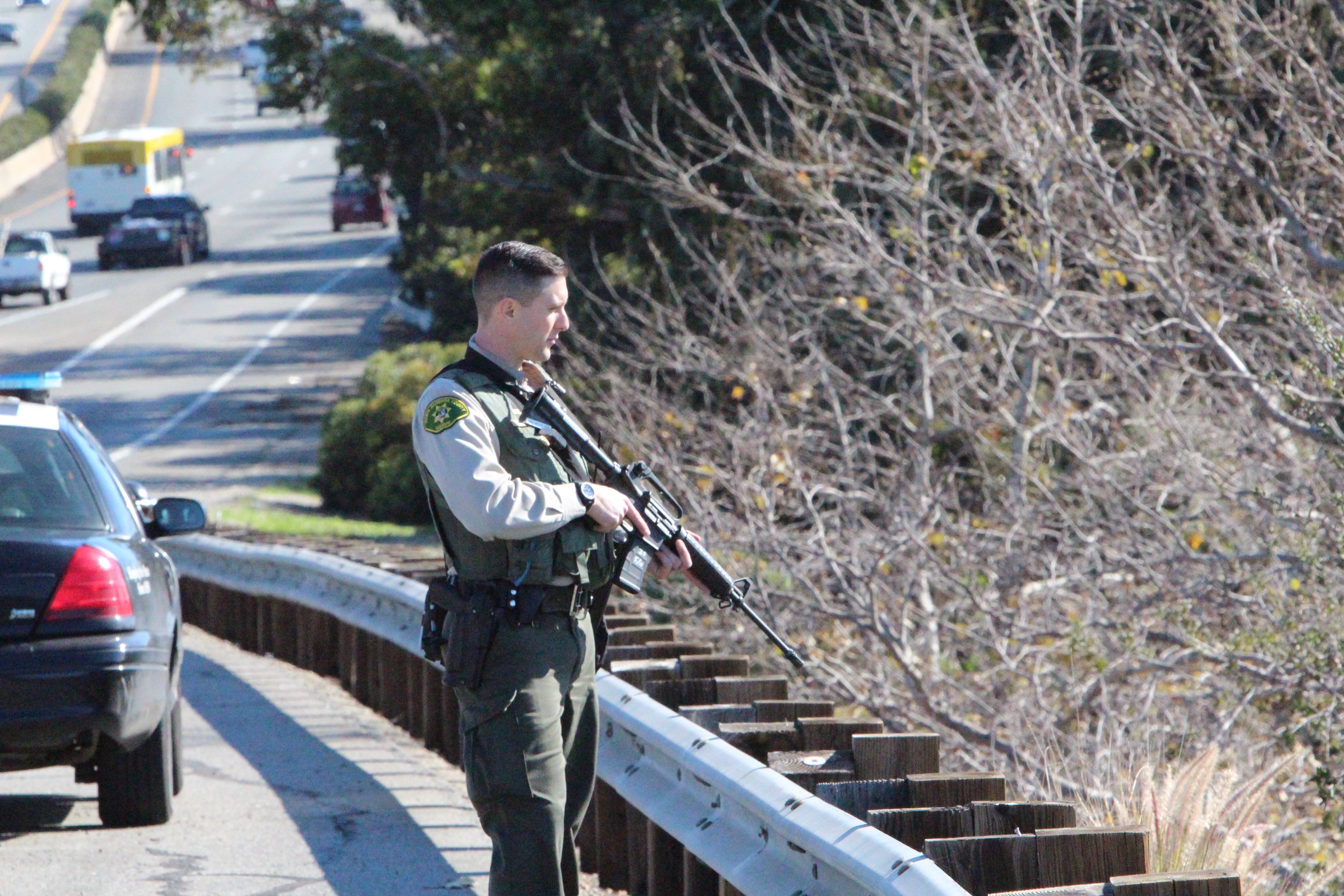 The Sheriff’s Office wants to take this opportunity to praise the student who saw something suspicious and reported the incident to school officials right away. Her swift response enabled law enforcement and school administrators to immediately initiate Standard Response Protocols. We also thank the students and staff at San Marcos High School for being calm and for following instructions rehearsed during lockdown drills. This successful outcome is directly related to the practice of lockdown drills.

We are pleased this situation came to a quick and safe resolution and we thank everyone involved for their collaboration and cooperation.

Update by edhat staff
11:30 a.m., February 5, 2019
The Santa Barbara County Sheriff's Office reports a safe resolution to the lockdown at San Marcos High School.
The suspect allegedly seen holding a gun was actually holding a radiator hose after his car had broken down. The Sheriff's Office reports it was a big misunderstanding and thanks "the student for doing the right thing and reporting incident right away."
Everyone is safe and all law enforcement units have returned to service.
Update by edhat staff
10:30 a.m., February 5, 2019

Around 9:45 a.m., edhat's very own Roger the Scanner Guy reported San Marcos High School in Santa Barbara was being placed on lockdown due to a report of someone seen with a gun.

Law enforcement quickly responded to the scene to search for a suspect the scanner reports described as a white male in his 30's with light brown hair possibly wearing a grey suit and/or khaki's, holding a pistol. The corner of Turnpike and on Hollister Ave have been shut down.

At 10:18 a.m., Santa Barbara Sheriff's Office confirmed San Marcos High School is on lockdown and are investigating a report of a subject with a gun.

At 10:45 a.m., the Sheriff's Office also confirmed the suspicious circumstances stating a student reported a subject with a gun in the parking lot.  There are no reports of shots fired or any injuries.

Parents are asked to avoid the area since campus is on lockdown while deputies investigate.

Report of a subject with a gun in the 4700 Block of Hollister, subject possibly holding a pistol. San Marcos High School ON LOCK DOWN.

Updated information provided by Roger in the below comments:

If I'm a teacher the first thing I do is walk in the classroom with my head down, silent. Wait about 10 seconds, and then say, "A radiator hose, really?" The very act of reliving stress by humor is badly needed. Take it down a notch. People respond well to deescalation and not perpetuation of unfortunate circumstances. Even good speech writers start presentations with a joke to lighten the mood. This was a mistake. It's okay to admit it. Handle accordingly. What's not needed is over-bearing administrators coming up with meta-counseling sessions and seventeen new strategies for dealing with this thing called life. Be a kid again. See it through their eyes. Put yourself back in high school and think of how you'd react. Do you really want more stress? Because one thing is certain: piling wood on hot fires causes raging infernos.

If I'm a teacher the first thing I do is walk in the classroom with my head down, silent. Wait about 10 seconds, and then say, "A radiator hose, really?" The very act of reliving stress by humor is badly needed. Take it down a notch. People respond well to deescalation and not perpetuation of unfortunate circumstances. Even good speech writers start presentations with a joke to lighten the mood. This was a mistake. It's okay to admit it. Handle accordingly. What's not needed is over-bearing administrators coming up with meta-counseling sessions and seventeen new strategies for dealing with this thing called life. Be a kid again. See it through their eyes. Put yourself back in high school and think of how you'd react. Do you really want more stress? Because one thing is certain: piling wood on hot fires causes raging infernos.

This isn't making a lot of sense. If the car was broken down, where did this person of interest disappear to? Why wouldn't security simply go talk to the guy with the cell phone and radiator hose in his hand? Did everyone run for cover and by the time the swat team arrived the guy fixed his car and left?

I think all your comments are crappy.

You are trolling. The kids under the desks didn't know if it was real or not. You being dismissive of the whole thing is insulting. Be a better member of the community or you could just choose to be quiet.

The thing about being critical toward those who saw the Radiator hose and cell phone and thought it was a gun at least one was a student. I don't find it funny at all that this person is cracking on a kid when it's these kids that live with constant stress about weather or not they are going to come home from school or someone is going to flip out and shoot them. All these comments over a stupid resentment just to feel all high and mighty.

He is just paying everyone back for his buddy getting busted for drugs...Typical.

Easy to say in retrospect, Zerohawk. Now you're just trolling.

and honestly, that's a crappy thing to say dude

nah, and no need to stoke a fire...
but its' a bit over the top for a cell phone and radiator hose.

Sounds like someone is disappointed he did not have a gun?

Close, it was a radiator hose, not a cell phone.

from a cell phone? i know...they can sometimes over heat and make your ear too warm. awful...dreadful things. :D

Do you have a source for that?

Better safe than counting the injuries.

ZEROHAWK how do you know?

Thank you Roger, John Wiley, Police, and everyone who contributed. Good news.

Cancellation page going out Roger over and out for now.

SBPD returning to the city...

Code 4 Return to cars sounds like all is OK...

Subject they checked out not involved back to the Command Post.

Subject being contacted at the bridge.

Cars all over the place in Puente area, probably trying to get to Turnpike. Can't do that. Go back: Puente to Vista Buena and turn right, turn left on Arroyo Rd, then left Auhay, right on Hollister.

Possible witness seen subject taking off suit wearing a black sweatshirt barefoot muddy waving at cars on a near by street Copter one has eyes on him.

Speaking to other witnesses who might have possibly saw the subject.

May all remain safe. The SBUSD’s newly hired Security Chief knows the school like the back of his hand having served as a local officer for decades and as an active, engaged parent. He’s a respected leader who I personally trust. The intent of this post is an attempt to reassure, calm via info. We all fear for the worse; hope for the best. I can only imagine parental, student, staff fears. Having a relative who commands a swat team, I know these are highly trained pros. The campus is known to the SBUSD Security Chief.

Yeah, we should just refer to them as "bogeypeople" until someone actually gets shot, and we're sure.

why refer to him as a gunman when it's not known?

a random person called this in and said he had a gun. it's a cell phone...

St Rapharl’s and El Camino are also on lockdown according to KEYT Report.

No, they don't have him. They have eyes on him walking around.

According to KEYT- They don’t yet know IF There is a fire arm. They are attempting to determined; no one hurt.

Is it confirmed that he was armed? Don't spread misinformation please.

Sounds like they have a suspect, taking witnesses to ID

I think lockdown lift call was for a different nearby school.

My son is posting that they got him, the gunman!

SO discussing lifting lock down.

FYI- for anyone listening online: It's hard to sort out online scanner traffic for anyone not expert like Roger, because you hear radio calls completely unrelated to this terrifying incident.

Lots of vehicles parked on Puente. Parents??? Hollister is blocked at Puente. Helicopter flying overhead at 10:48a.m. If you are a parent and trying to get to your kid, don't come onto Puente - there's not any way to get to Turnpike from Puente.

Parents shouldn't go to the area. When the school is on lockdown, no one can be picked up anyway.... Even if the area wasn't surrounded by police.

Santa Barbara Police Officers made two separate traffic-related arrests on Tuesday, a hit and run suspect and felon in possession of narcotics.

Andrew reports a dehydrated hiker was airlifted from Inspiration Point.

Two Santa Barbara Unified School District board members penned an Op-Ed about requiring the COVID-19 vaccine to ensure the health of students and staff.

Josh shares a photo of the Santa Barbara sunrise from E. Cabrillo Boulevard.

Old Spanish Days announced their annual Fiesta Pequeña event at the Santa Barbara Mission will be closed to the public and Noches de Ronda at the courthouse will be canceled.

Roger reports a small brush fire near the 500 block of E. Montecito Street.

Face Covering to Be Required Indoors Regardless of Vaccination Status

Santa Barbara Police officers successfully resolved a standoff with an armed individual appearing to be suffering from a mental health disorder.