On April 30, 2021, around 0945am, The Santa Barbara Combined Communications Center received a frantic call for help in the 1st block of Wade Court, Santa Barbara. The reporting party called 9-1-1 asking for assistance regarding her boyfriend, who appeared to be suffering from an opioid overdose and was unresponsive on the bathroom floor.

Officer Matthew Carlisle and Motor Officer Edward Kasper immediately responded to the call to render emergency aid. While Officers and Paramedics were responding, Dispatcher Devyn Johnson was on the phone with the reporting party providing life-saving emergency medical dispatch (EMD) instructions to the reporting party over the phone. CPR was initiated with the instructions provided by Dispatcher Johnson. 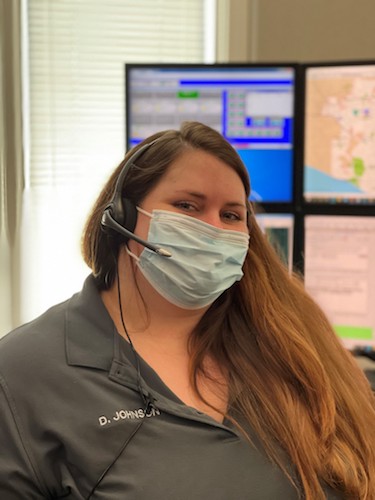 The subject was transported to Santa Barbara Cottage Hospital Emergency Room for treatment and is expected to make a full recovery. The revived subject had expressed his gratitude to Officer Carlisle, Motor Officer Kasper, and Dispatcher Johnson for saving his life.

Santa Barbara Combined Communications Dispatchers are specially trained in providing EMD to members of the community who call for assistance while others are having a medical emergency. These instructions, given by our dispatchers, have saved countless lives over the years.

Santa Barbara Police Officers have been professionally trained to recognize the symptoms of an opioid overdose and when administer the life-saving drug, Naloxone. Officers currently carry Naloxone with them during their duty shift and have saved numerous lives by being the first responders on scene during these overdose medical emergencies.

i know these guys personally and they are heros every day they are on duty (and off!). I've known Kasper for many years and he's a fine example of a good police officer. i feel secure and content knowing these guys are on patrol. Thank you!

Charge the voluntary victim for costs.

There's a difference between
"accidental" & negligent..
This was no accident.

Nice work SBPD. Surprising and sad that opiates are pushed by the medical establishment instead of less addictive painkillers.

Thanks so much OOPS and SKA, it’s been a very tough journey for all of us (circuitous is a perfect description). So grateful for all of the guidance and love we’ve had along the way. I know we still have a very long road ahead.

I have a teen son with substance abuse and mental health challenges. Officer Carlisle has been first on the scene to help us several times over the last few years. He has always been gracious and kind, even in the midst of pure chaos. He’s probably very sick of us but I’m instantly at (relative) peace when i see him show up. honestly all of the first responders that have helped us over the years have been amazing.
PS My son is 6 months sober and doing so much better

Yay for your son and (virtual) hugs to you who love him enough to hang in there and encourage and support his recovery. Even if it's a circuitous route, there is help and hope. Best wishes.

thanks for sharing what must be a tough journey, god bless you & your son

Our first responders are awesome. Once, my father, who was 76 at the time, was visiting us from L.A. We noticed his breathing was labored and he said he had chest pains. Because he'd had a quadruple bypass at 64, we thought he was having a heart attack, and called 911. The EMTs were fantastic, and one even said he didn't think it was a heart attack, but a pulmonary embolism (blood clot). My dad was put on blood thinners at the hospital, and it took a few days to get the actual diagnosis, but that EMT was 100% right! So thankful!

I heard that call and could have sworn I heard someone say 1144, then I heard 2 doses Narcan still I thought this one was gone and they were just trying because maybe the family was so upset. We have the best responders here they really care about people here they don't care who you are either it's all about saving lives...

wonderful work ! Now the "overdose-ee" should pay the bill --

We already paid the bill via property taxes,of which 51% goes to public safety