The Santa Barbara County Sheriff’s Office is releasing the names of two young females who were fatally injured in a vehicle collision that occurred at approximately 9:23 p.m. last night, June 26, 2017, off Gibraltar Road. The decedents are 17-year-old Lily Afton Brennan of Ventura and 19-year-old Lesli Michael Sandoval Nunez of Ventura.

Due to the nature of the critical life threatening injuries and the remote, rugged terrain, the Santa Barbara County Sheriff/Fire Air Support Unit and the Santa Barbara County Sheriff’s Search and Rescue (SBCSAR) team were called in to assist in reaching the victims. In order for Copter 3 to land and begin the extrication process, CHP shut down Gibraltar Road, which stayed closed for several hours while emergency personnel assisted the involved parties.

Medics, Fire, and Santa Barbara County Search and Rescue personnel repelled down to the vehicle and started treating the occupants who were trapped inside. They determined that two of the occupants (Brandon Woodward, the driver, and a 16-year-old female juvenile from Ventura) suffered major injuries. One male occupant (19-year-old Dalton Murrieta of Ventura) had minor injuries and two female occupants had fatal injuries.

To ensure the survivors received the help they needed as quickly as possible, “Calstar 7” an EMS helicopter was also dispatched to the scene. Copter 3 hoisted a Santa Barbara County Fire Paramedic to the vehicle to help package the two critical patients for hoist rescue. Copter 3 then hoisted the first patient, Woodward, from the vehicle and transported him to a nearby landing site along Gibraltar Road. Woodward was ultimately transferred to Calstar 7. Copter 3 then returned to the scene and hoisted the second critical patient, the 16-year-old female juvenile, and a paramedic into the helicopter. The second patient was then transported directly to the Cottage Hospital helipad.

The Sheriff’s Search and Rescue team along with fire personnel then spent the next several hours helping to extricate the third patient with minor injuries from his vehicle and raise him back up 300 feet to Gibraltar Road where he was transported by AMR to the hospital.

Search and Rescue and fire personnel continued to work together throughout the night to remove the deceased females from the vehicle and raise them back up to Gibraltar Road where they were released to the Coroner’s Office.

A total of five technical rope-raising evolutions, which combined is more than 1,500 feet, were required in order to get all of the emergency personnel, equipment, the third injured victim and the two deceased females back up to Gibraltar Road.

CHP is conducting an investigation into the fatal collision and has arrested the driver, Brandon Woodward, on suspicion of driving while under the influence.

A fatal traffic collision occurred at approximately 9:23 p.m. last night.  A male driver with four passengers was traveling on Gibraltar Road southbound, south of East Camino Cielo in a 2005 Volkswagen Passat.  The driver lost control of the vehicle and the vehicle went down a steep embankment overturning numerous times.  The Volkswagen came to rest approximately 300 feet below the point at which it left the roadway.

The California Highway Patrol, Santa Barbara County Fire Department, and American Medical Response Ambulance Company, responded to the collision scene.  The driver and the 2 passengers were transported to Santa Barbara Cottage Hospital.  Two other passengers succumbed to their injuries they sustained as a result of the collision, and were pronounced deceased at the scene at approximately 10:30 p.m.  Their names are not releasable pending next of kin notification.  Please contact the Santa Barbara County Sheriff Department for the names of the deceased.

The driver of the Volkswagen was placed under arrest for suspicion of driving while under the influence of alcohol.

The roadway was blocked for several hours while emergency personnel assisted the involved parties.

Two people have died and another is in critical condition after a vehicle crashed 300 feet over the side of Gibraltar Road on Monday evening.

When crews arrived on scene they discovered five occupants in the vehicle. Two occupants were pronounced dead on arrival, one in critical condition with major injuries, one with moderate injuries, and one with minor injuries, reports Captain Dave Zaniboni.

Emergency crews are on scene retrieving victims performing hoist operations. A helicopter is on the scene to transport the occupant in critical condition to Santa Barbara Cottage Hospital. The occupants with major and minor injuries will be transported via ground ambulance.

The cause of the accident is being investigated by the California Highway Patrol.

Edhat will update this story with more information as it becomes available.

Vehicle over the side of Gibraltar in the 2900 block, five people trapped inside.

We heard several sirens and went out to look around the hills, when we saw this group of vehicles in the direction of Gibraltar Road. Some had flashing red lights, so after reading Roger's report of vehicle over the side we're guessing that's what's in this long telephoto night pic. Hope they're ok. 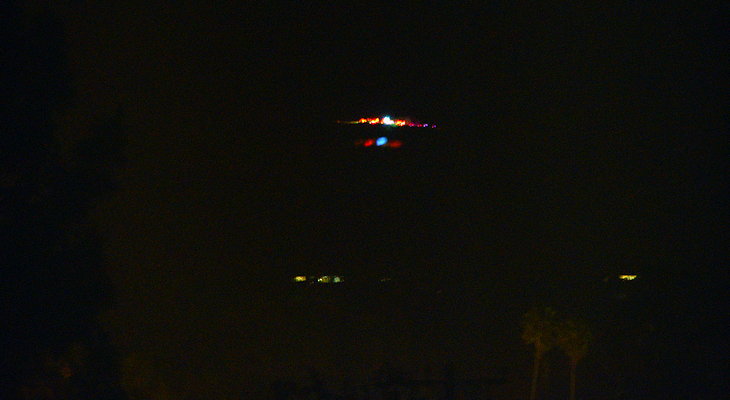 9:27pm Vehicle over the side of cliff 2900 Block of Gibraltar at Rattle Snake trail...

More units being sent in...Radio is breaking up some hard to hear but it sounds like a confirmed vehicle over the side with injuries...Sounds like it.

They are saying that the vehicle is too far over the side to recover the victims they are waiting for search and rescue.

There is a hard closure from Flores Flats to the shooting range still waiting for search and rescue to recover 5 victims...

Command 4 tac 8....On your radio dial Squad one SBCity Fire now being sent up there I will probably close up shop here but I'm pretty sure it will be on at 11...You can also find Up Dates on the CHP Web site...

Sounds like a copter is up there hopefully rescue will come soon...As for me I'm crashing. Roger over and out.

We went outside with the tripod and got a clearer pic at max zoom, and also a video showing the helicopter circling. I've posted them on sbcitizen dot com

That is horrible I'm so sorry for those lives lost rest in peace.

Is this the same area where the two other (somewhat) recent incidents where vehicles have gone over?

Last one before this 6/15 2 injuries...2300 Block...2 Incidents within 24 Hours 2900 Block..Not sure of the guy trapped for 3 days says where Rattlesnake trail hits Gibraltar sounds like the same area...The older wrecks besides these I have heard in the 3000 Plus blocks. For recent accidents last year from what I googled looks pretty much like the same area.

The driver's life is about to change forever. Stupid decision to drive drunk, buddy!

I feel so bad for the parents of those girls :/ and everyone involved. This isn't the first or last time that mountain will claim lives. RIP.

Agreed... how on earth can

Here’s an idea. Use the

This is a joke right?

Is it possible for the cops

We went out there today.

After the tennis courts at

I’m glad the injuries are not