By the Santa Barbara Police Department

On September 9, 2022, around 1:30am, the Santa Barbara Police Combined Communications Center received a report of a serious injury traffic collision involving a single vehicle. Initial investigation shows a Ford sedan was traveling at a high rate of speed while exiting the 101 southbound freeway off-ramp at Castillo Street. The driver of the vehicle was attempting to turn left onto northbound Castillo Street and collided with a large retaining wall.

The Critical Accident Response Team responded to the scene to handle the investigation.

The driver was arrested on scene and identified as Ray Timothy Oberholzer, a 25-year-old Santa Barbara resident. He was booked into the Santa Barbara County Jail for felony DUI causing injury. Bail is set at $100,000.

This is an active investigation, and no other information is available currently. 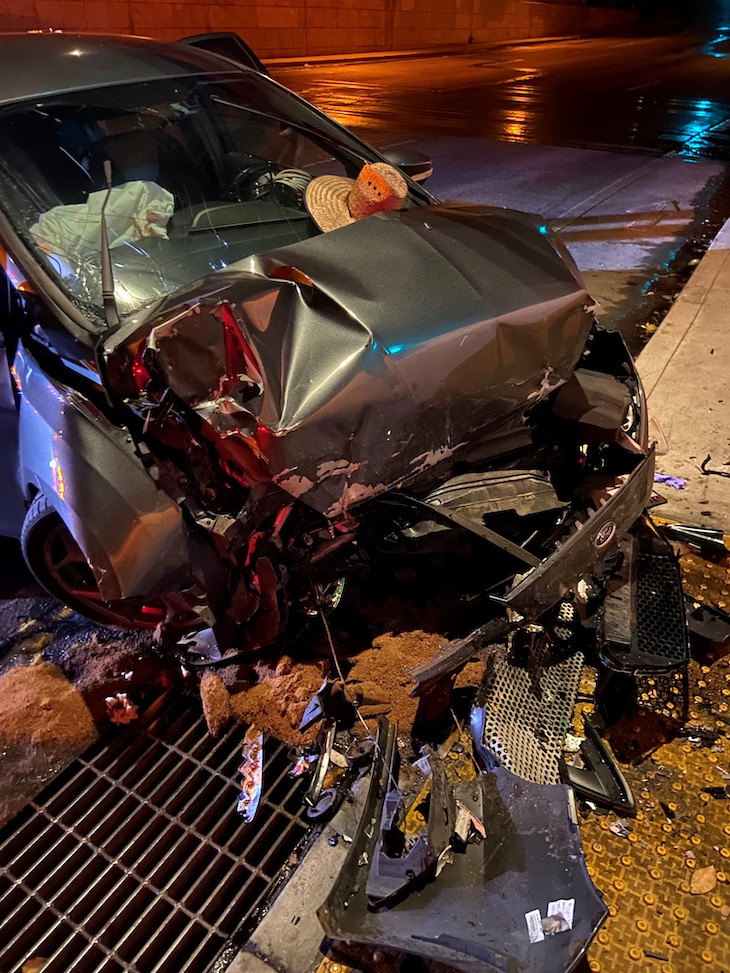 Where was he last served a drink? Businesses need to be held accountable when they over serve their customers to the point of inebration.

I also don’t like drunk drivers but let’s not blame the business for the child’s mistake, I’m sure you’ve got a lump of coal for Christmas before but did you go & sue the North Pole?

The child is the person who thinks Santa Claus is real and uses him in an argument by analogy.

Sue the car maker and gas station while you're at it!!!

BDM - why? Was this car designed and marketed for the sole purpose of killing as many people as possible in the shortest amount of time?

SBCOUNTYLOCAL is correct about holding business accountable. In Alcohol Beverage Control training you’re taught to look for signs of intoxication when serving alcohol. If you serve more alcohol to someone who is obviously drunk it can result in the bar/restaurant/club having their liquor license suspended. Additionally, if an inebriated patron leaves and causes an accident other vehicles or injured parties involved could potentially file criminal charges against the establishment or server. With that said, I’m a firm believer in personal responsibility. If you’ve had too much call a taxi, Uber, lyft, sober friend or family member to pick you up instead of driving. The passengers should have done the same. This was preventable!

It's entirely possible that they were not drinking at an established cocktail business but rather had puchased their booze from a store and were drinking at someones home or at the beach or elsewhere. In that case no one can be held responsible except the persons that were intoxicated.

How would a bartender know the person is going to get behind the wheel of a car? The only person that knows that is the drunk driver himself. It's completely irresponsible personal behavior and only one person should be held accountable.

how did the sombrero get there

It's a straw sun hat that would generally be worn by a woman. Possibly the first responders put it there so that the tow truck driver would stow it with other personal effects?

4:49am - that's a lifeguard style straw beach hat that is actually more worn by men around here, than women. I see young guys wearing these all the time at the beach, at the pools, at soccer games, etc.

and young and old guys gardening and and driving MarBorg trucks.

Play stupid games, win stupid prizes. I wonder how much of the vehicle's fluids (oil, coolant, fuel, battery acid, etc.) went into the storm drain as shown in the photo with some mitigation? Can this owner be made responsible for the environmental cleanup during the proceedings?

There is another causative liquid to comment on. As we all know there is a water slick at that underpass caused by the nearby "capped" hot spring. It has been an issue ever since the freeway was built, sinking the level down to the seepage point. Even a sober person can turn too abruptly there and skid.

Lucky777 is right.
Without the heat that site is a algae slip and slide and with the weather the way its been this does wreck does not surprise me.