After more than a year of planning and preparation, the Santa Barbara County Sheriff’s Office, the Santa Barbara County District Attorney’s Office, Davey’s Voice and the Humane Society of the United States hosted a training today, September 12, 2017, for area law enforcement, animal control/humane officers, code enforcement and prosecutors on animal cruelty investigations. The training has been offered in other parts of the country but this is the first time it was taught in Santa Barbara County as a California Commission on Peace Officers Standards and Training (POST) certified class.
The District Attorney’s Office and Sheriff’s Office worked to bring the training to Santa Barbara County when they identified the need to train personnel on the specific requirements surrounding animal cruelty investigations and what is needed for a successful prosecution. 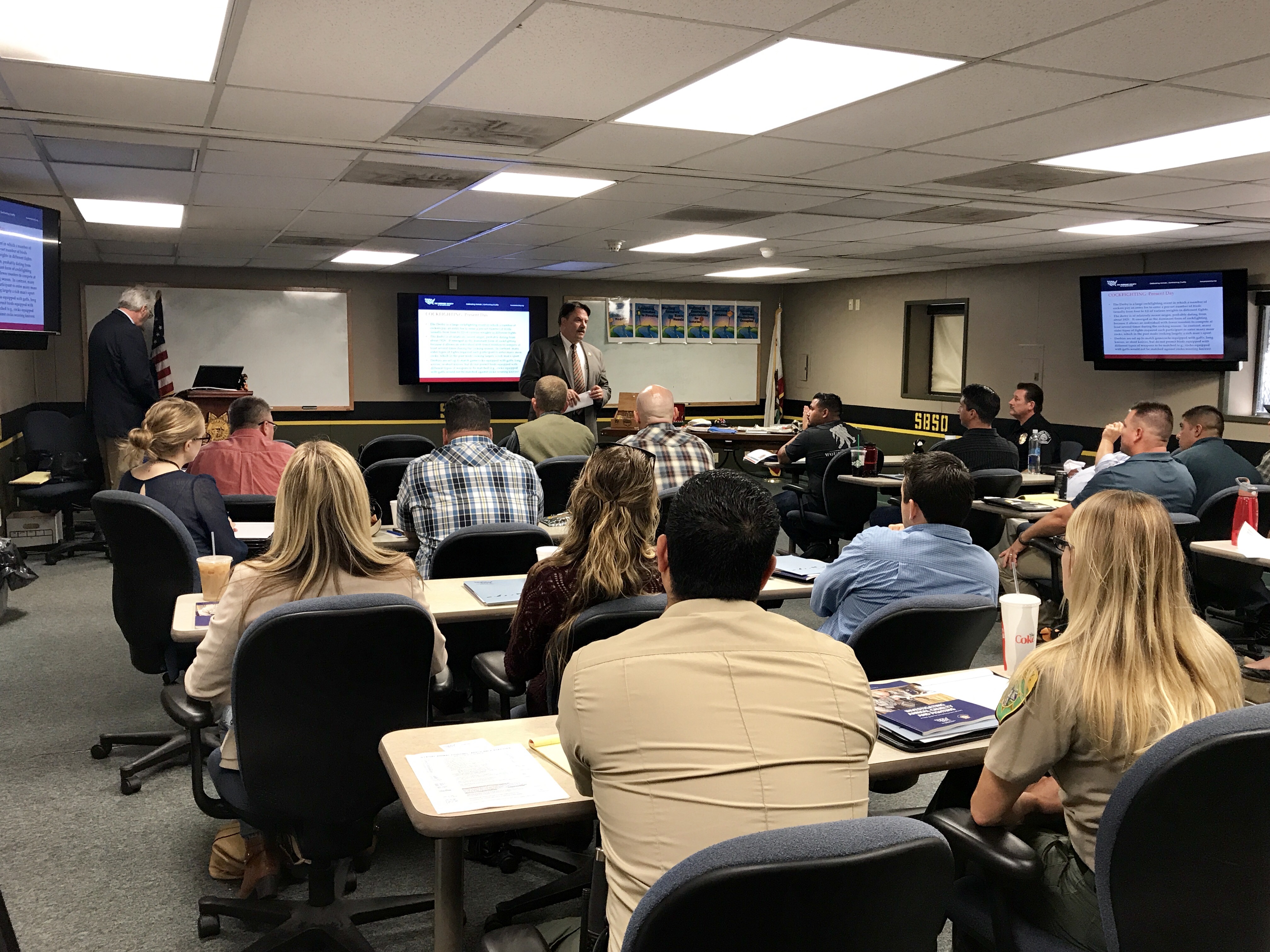 The Sheriff’s Office and District Attorney’s Office are pleased to have hosted the class and hope to have it offered in Santa Barbara County on a regular basis.

Sheriff Bill Brown said, “Thoroughly investigating and vigorously prosecuting animal cruelty cases is the right thing to do. It is also important for the safety of the overall community. Numerous studies have shown that suspects w ho commit acts of animal cruelty often go on to commit violent crimes against persons. The sooner such offenders can be brought to justice, the greater chances of preventing crime in the future. The Sheriff’s Office is proud to partner with the DA’s Office and the Humane Society in presenting this key training for law enforcement officers, animal control officers and prosecutors alike.”
More than 30 officers and investigators participated.

Toggle Comments (Show)
Deputies Receive Training for Animal Cruelty
I would like to thank Davey's Voice, The HSUS, and the DA's Office for putting this program together as well as the SB County Sheriff's Office and personnel for participating in it. As stated in the story, the benefits to society go way beyond that of the violence and suffering of animals. It took a long time for people to see the connection between animal and human abuse. This is vital for law enforcement and the courts. Thank you all for putting California ahead of the game!
Deputies Receive Training for Animal Cruelty
Having looked into both I would say that cockfighting is far less cruel that the meat and egg poultry industry.
Deputies Receive Training for Animal Cruelty
This is great!
Deputies Receive Training for Animal Cruelty
Excuse me, but EVERYTHING I post is truth - I'm in the Truth movement, because, well, that's really ALL I care about anymore. Apparently, my username here on edhat has caused some sort of bizarre cognitive dysfunction in your brain, which causes you to take most every comment I post as a personal affront. I really & truly feel bad about this, but I'm NOT going to self censor just because you can't tolerate the truth. (Or maybe your a cop, and you just don't want to admit it - whatever the case, I NEVER lie about my experiences in the Army, because the truth is SO MUCH BETTER THAN ANYTHING I COULD EVER MAKE UP!)
Deputies Receive Training for Animal Cruelty
What a psycho.
Deputies Receive Training for Animal Cruelty
'Sheriff Bill Brown said, 'Thoroughly investigating and vigorously prosecuting animal cruelty cases is the right thing to do. It is also important for the safety of the overall community. Numerous studies have shown that suspects w ho commit acts of animal cruelty often go on to commit violent crimes against persons.' First of all, here's a fact I KNOW from personal experience, but cannot prove: When I was 18 YO I joined the US Army As a "63 Bravo", the uniformed version of a Jiffy Lube "technician", and after training, I was sent to NATO Site 111 near Munster bei Dieburg, West Germany and became a member of the 6th Military Police Company. 6th MP Co. provided "physical security" (security guards) to the "site" where nuclear weapons are stored. MPs selected for this type of duty were "PRP" - from Wiki: "The Personnel Reliability Program (PRP) is a United States Department of Defense security, medical and psychological evaluation program, designed to permit only the most trustworthy individuals to have access to nuclear weapons (NPRP), chemical weapons (CPRP), and biological weapons (BPRP)." I first noticed that PRP might not be such a great filter came about 2 weeks after I arrived in country - the local military center in Darmstadt had a "fest", and several MPs were dancing for joy, & (in response to my inquiry) exlaiming "we get to beat up the drunks". The MPs further clarified "because it's fun", and "because their drunks, and we can just pretend they 'fell & hurt themselves." But the devastating truth was revealed when one of the MP platoons developed a new use for the microwave ovens in our day room: "popping" small creatures such as frogs, mice, and a hedgehog by "nuking" the animals until the internal pressure ruptured their bodies. If this training program were anything but hypocricy, the nationwide practice of shooting pet dogs during "no knock" drug raids, no matter WHAT the animal is actually doing, would've been addressed. (And don't try to tell me that's not an issue here, because it's happened to some poor woman in Carp a few years ago - she posted a well written & very believable account saying her dog was shot purely as an act of cruelty AFTER she had specifically requested a chance to put her dog away while "probation" search was conducted on a male tenant in her home. Just search Facebook and see all the stories of beloved family pets murdered in the name of "officer safety". )
Deputies Receive Training for Animal Cruelty
Spread that FUD, fantasy boy.
Please Login or Register to comment on this.

Don't forget not only does CF

It looks amazing and will be

I saw a CFA order taker

My gosh. Please look up Aesop

My gosh! This is a good thing

CFA, build a staff of about 5

I thought after 45 years here