The historic carousel inside Chase Palm Park will be leaving Santa Barbara in the next few weeks after its 20-year lease ends with the City.

The building that houses the carousel and the surrounding parklands are owned by the City of Santa Barbara, but the carousel itself is owned and operated by Historic Carousels, Inc., a private company, based in Hood River.

Historic Carousels will be removing the carousel and transporting it to Hood River, Oregon for installation in a dedicated museum of historically-significant carousels. The carousel will be removed during the week of December 4.

As a last hurrah, the Santa Barbara Parks and Recreation Department is inviting the community to bid farewell to the jovial horses on a stick with a "Carnival at the Carousel" free family fun day on December 2.

The historic Allan Herschell Three-Abreast Carousel, built in 1916 and extensively restored in 1997, came to the Chase Palm Park Expansion in 1999. Prior to arriving in Santa Barbara, the carousel was housed in San Diego. 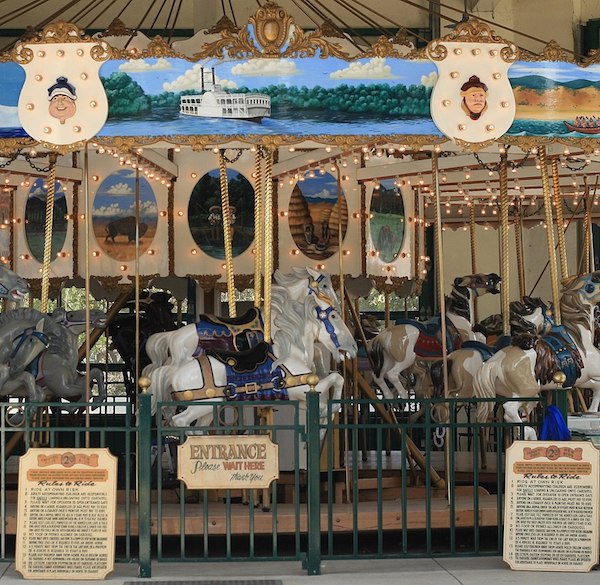 "We are sad to see the carousel go," said Parks and Recreation Director Jill E. Zachary. "Throughout the country, carousels have played an important role in the development of family recreation and entertainment. We understand the need to preserve this important historic specimen in a museum setting, and want to celebrate its time in Santa Barbara by providing the community with a family festival to enjoy the carousel before it is taken to its new home."

The Carnival at the Carousel celebration will take place on Saturday, December 2 from 10:00am to 2:00pm. The carnival will include music, giveaways, a photo booth, traditional carnival games, a bouncy castle, balloons, and face painting. Historic Carousels will provide all carousel ride free of charge.

"I cannot express how appreciative and honored I am to have worked with the City of Santa Barbara and the Parks and Recreation Department for over two decades," said Brad Perron, President of Historic Carousels. "This carousel has enormous sentimental value to our family. It will be the first part of our development plans for a Carousel Museum next to an outdoor amphitheater and destination hotel."

In addition to the Carnival at the Carousel event, all carousel rides will be free of charge on Saturday, December 2 and Sunday, December 3.

I think the snafu of