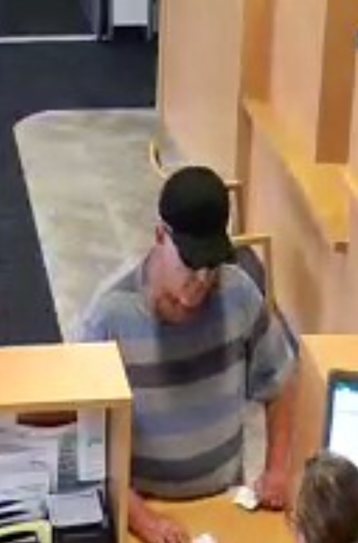 At approximately 4:10 p.m. today, July 7, 2017, Sheriff’s deputies responded to a report of a bank robbery at the Golden 1 Credit Union located in the 5600 block of Calle Real in the City of Goleta. According to witness statements and video surveillance, a suspect demanded cash from the teller and indicated that he had a weapon although one was not observed.

He left the bank with an undisclosed amount of cash. Sheriff’s deputies, with the assistance of a K9 team and Santa Barbara County Sheriff/Fire Air Support Unit Copter 2, searched the area but were not able to locate the suspect. The suspect is described as a heavyset Caucasian male with grey hair, possibly in his sixties, approximately 5’6” tall and 260 pounds. He was wearing a dark baseball cap and a grey shirt with horizontal blue and grey stripes.

The Sheriff’s Office is releasing surveillance photos from the bank robbery and is asking anyone with information regarding the suspect’s identity, whereabouts, or any other information that would assist investigators, to contact the Sheriff’s Criminal Investigations Division at 805-681-4150 or to leave an anonymous tip call 805-681-4171. You can also send a tip by using the following hyperlink: http://www.sbsheriff.org/anonymoustips.html.

A bank robbery at the Golden One Credit Union in the 5600 block Calle Real in Goleta. The suspect said he had a gun. He's described as a clean-shaven male wearing a black ball cap, 5'6" and 260 pounds with a grey shirt that has horizontal stripes.

SBSO on scene in the area...

Handed the teller a note he had a gun but none was ever seen.

Has rosacea on face the red skin stuff in his 60's Big nose WMA DARK SUNGLASSES THE SHIRT IS A GREY T-SHIRT.

Not the subject still looking...

Suspect matches the description of another suspect in a robbery in New Hall looking for a possible vehicle now and on a possible.

The vehicle they were looking at being driven by a single female...Suspect is a male.

Clearing copter...Not the vehicle in Mariposa Reina Copter 2 available to help with evac at the fire.

All I got on the robbery for now...

They said that his description fit the description of a robber who hit a place probably a credit union in Newhall, not that he was from there. I don't know where he's from they probably don't know either.

Not a good idea to throw a

The High Cost of California

My math is off today. You

What tests are approved by