Earlier today Morales was contacted by CHP in southern California and taken into custody. He is no longer being sought after by police.

On 11/14/20 at approximately 1525 hours, officers responded to the 200 Blk of E. Grant in response to a domestic disturbance. One of the responding officers saw a male subject who was known to be wanted for charges unrelated to the domestic disturbance. The officer attempted to detain the subject and a physical altercation ensued. During the altercation, the suspect pulled a handgun and shot at the officer. The officer was un-injured and did not discharge his firearm. The suspect then fled the area on foot and later stole a vehicle at gunpoint.

The suspect has been identified as Dustin Morales, 27 years of age, 5'6" tall with brown hair and green eyes. Morales is to be considered armed and dangerous and should not be contacted by the public. Morales is wanted for Attempted Homicide and Carjacking. 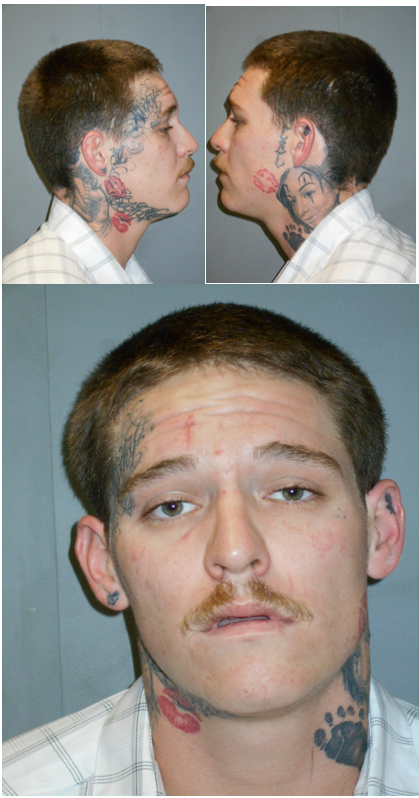 Donchichi, if your wife or daughter was carjacked at gunpoint, would you feel the same way?

This individual has been in and out of jail his entire life and comes out to procreate(baby foot tat)... And the cycle continues.

He's got Heart?? He just tried to kill someone Donichichi! Get real.

You kids don’t have anything better to do? Go outside and play, do something. When judgement day comes, Our Maker will look at the path we chose. From the very first step taken, to the very last. I pray we are judged without prejudice and that our strengths and qualities are not forgotten! That our childish immaturities and poor decisions (criminal activities) do not balance evenly when measured alongside the Life we lived in it’s entirety. Some people don’t have compassion or the capacity for forgiveness. This cat “ You All” are clowning on, he’s got something that you all are lacking. HEART!!! Days are numbered, yup. For all of us!
If the need to comment on things that do not involve, pertain to or personally affect you does something special for you, by all means, you’re entitled. I won’t share my thoughts on how lame or weird I think that is. Or how it’s actually kind of sad come to think of it. Might even be a normal thing to do for singles with a ton of available time and nothing better to do. I don’t know, seems pretty lonely, maybe something to entertain if there was no one in my life. Just I, a computer, the latest gossip and my opinion. Sweet....#screentime

Donchichi he has something.... but he stole a vehicle at gunpoint from someone and I wonder if you would be so forgiving if it was someone that you loved that he did that to. He could have hurt, or killed them. And for what? A car? That's not heart, that is dumb!

Pretty sure you just shared them. Welcome to the comment board.

How does this personally affect you? If not, why are you commenting?

If you answer an ad for a car on Craiglist and this guy shows up don't buy it.

Yeesh. This one's broken, send him back to the factory.

Those I-never-want-a-real-job tattoos should be very easy to spot.

The mess on this boys face looks like it was drawn with an "Etch A Sketch." Call mama Dustin, your days are numbered:)