An estimated 75,000 spectators crowded State Street for the 2018 Summer Solstice Parade, which offered kudos to those who provided assistance during the Santa Barbara twin disasters in January. The Solstice committee selected “Heroes” as the theme to honor those who were so instrumental during and after last winter’s devastating Thomas Fire and the Montecito flash flooding and debris flows. The annual three-day event featured a parade down State Street, along with music, food and games at Alameda Park, where parade floats were on display through Sunday afternoon. 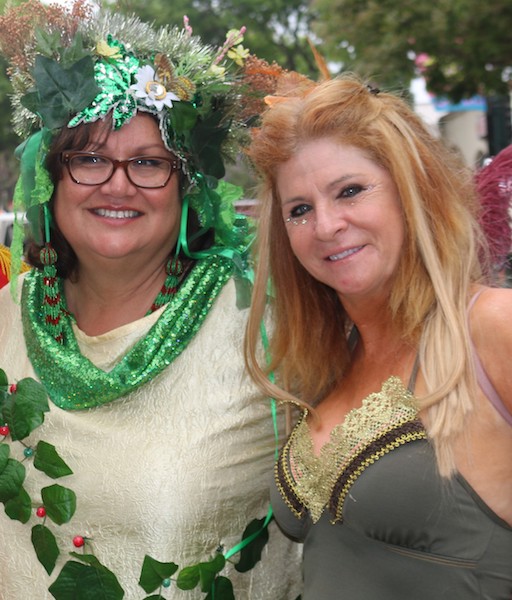 It was a cloudy Saturday morning as participants arrived to construct floats, make final design touches and apply face paints to match their amazing costumes. The Santa Barbara Summer Solstice Celebration is the largest art event in Santa Barbara County, and has been a great favorite of locals since 1974 when it began as a birthday celebration for local artist and mime Michael Gonzales. The nonprofit celebration continues to attract thousands of visitors each year, continuing the memory of Gonzales' through the multicultural performing arts gathering.

Mayor Cathy Murillo and 1st District Supervisor Das Williams were among the “Pass the Hat” float participants along with dancers, and volunteers collecting money to benefit the Summer Solstice Celebration. Mayor Murillo wore a crown of beautiful greenery and flowers designed by Lisa Thomas, float and costume designer. The Mayor said she was aware the nonprofit had some financial difficulty this year but was happy everyone pulled together to make the 44th annual a reality. 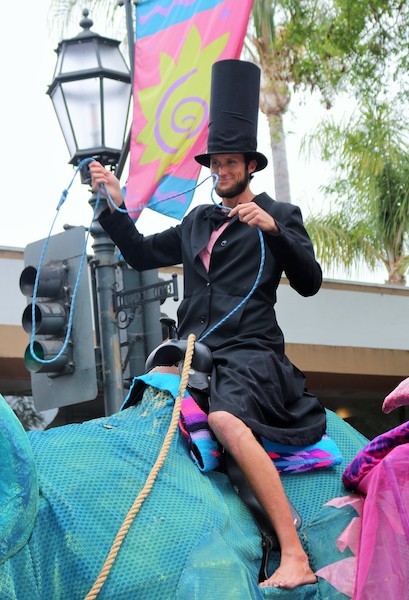 I spoke with Brenda Mills, one of the stunning dancers in Egyptian blue feathers, who said she was enjoying so much being a part of the Summer Solstice Parade. The Egyptian float, seemed to me to depict the ancient Phoenix Rising from its own ashes, a reminder of what has happened in our own community this year. Leading the float was a huge dance troupe, along with writer Richard Adams of CASA dressed as an Egyptian Anubis, and a bevy of Egyptian garbed men and small children who were really something to behold as that sea of blue began to move down State street. The Brazilian dancers with talented musicians, including Mariano Silva, also had everyone moving to their sensational Samba scene.

Veronica Swarens, who portrayed Mary Todd Lincoln, was stunning in a period gown she said she bought online, and her counterpart President Lincoln looked amazing on the 'Historical Figures Riding Dinosaurs” big blue dinosaur. Maddy Haines, a dinosaur keeper from Santa Barbara Zoo brought one of the Zoo's exhibits to walk in the parade. “We are very happy to be a part of this wonderful community event and everyone seems to love our dinosaur,” said Ms. Haines.

Nice to see Santa Barbara Police Department Officers Heather Clark and April Deblaw who were assisting participants at Cota and State getting set up for the parade. They said they were happy to be part of Solstice and appreciated being included to enjoy the community parade and help in any way they were needed. SBFD were giving little ones a look at the fire truck cab.

Each year there is an artistic competition for the Solstice T-shirt and Poster design that is sold as a fundraising vehicle, and the 2018 poster and T-shirt design award went to Victor Elsey. From dancers to dinosaur’s to people on stilts it was one more memorable event honoring the ocean of artistic people living in the Santa Barbara 'bubble,' and a tribute to their great love for their city by the sea, as well as their solid support of the recent fire and flood survivors and the brave people who stood tall to help them. 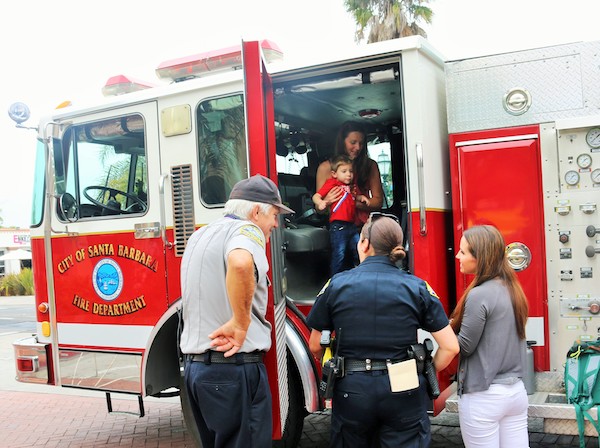 Congratulations to Robin Elander, Executive Director, and her loyal army of amazing community members who made this 44th celebration possible. Santa Barbara loves you and so do I! For information visit: www.solsticeparade.com.