The 2019 Women’s March - Santa Barbara was an energized day for resistance, action, and unity. With a theme of “Truth To Power”, more than 3,000 people came together to De La Guerra Plaza on Saturday, January 19. Before they marched up State Street, speakers and participants were asked to consider how, as individuals, they will “speak truth to power”. 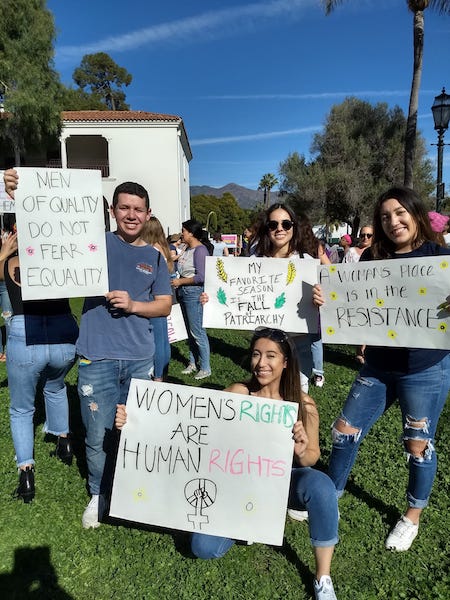 Speakers brought attention to the plight of missing and murdered indigenous women and girls, to the challenges of inadequate access to health care, to the dream of living without fear of sexual violence, and many other concerns. Speakers included Assemblymember Monique Limón, Senator Hannah-Beth Jackson, MLK Organizer Rosalyn Collins, and more. 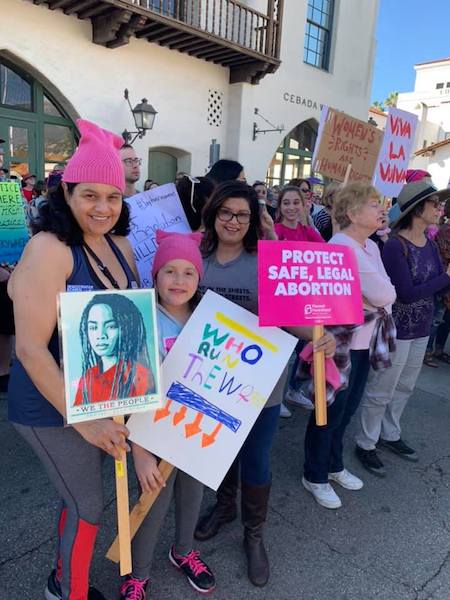 Some of the prominent actions that participants were asked to take included postcards to SB County Supervisors opposing proposed new oil leases in north county, and postcards to formally comment on proposed amendments to Title IX, specifically federal regulations regarding sexual abuse investigation.

The Mission of the Women’s March is achieving equal justice for all through community action, harnessing the collective power of women of all identities, race, gender, class, and sexual inclusive communities including queer, non-binary, non-conforming, transgender; demanding intersectionality in promoting visibility for the numerous causes of the disenfranchised; and promoting personal
accountability to create change!

It’s possible to be pro-choice and still not be ok with the thought of baby not getting a chance to live. I hate knowing cars kill people but I still make the CHOICE to drive one almost everyday.

A lot of misogynists here.

Building a baby inside a woman's uterus is hard work that only her body contributes to. It shouldn't be forced labor. That's akin to slavery.

What tax dollars are funding abortion? Never heard of that one!

Ever had an STD test at Planned Parenthood? Testicular cancer check? A yearly PAP test for cervical cancer? A breast exam? Discussed every birth control method available with a knowledgeable professional? Used one of those methods and asked them about side effects? Been treated for cervical dysplasia, by a doctor who's seen more similar cases and has more experience with colposcopy, LEEP and other techniques than can be found in most medical practices? Yeah. I didn't think so.

So you've worked at a PP clinic where you've observed this? You're full of it.

About 50% of Planned Parenthood revenues come from the federal government. A very small percentage of their services go to anything other than abortion and they use very creative accounting methods to pretend that they do things like family planning and provide counseling. MOST of the clinics don't.

The biggest threat to the environment is over-population. There are over 600,000 abortions per year in the U.S. and nearly 42 million world-wide. There maybe a day when we limit the number of children and put a carbon tax on each child born. China had the right idea but a mis-guided policy.

I'm proud of each and every person who came out to this march. Heroes, all of you! Thank you. It is so sad that these kinds of protests are still needed in 2019. We have NOT "come a long way, baby".

Stop sugar coating everything. One woman looks at an ultrasound and is happy there's a heartbeat. The next can't believe this is happening to "her body". Both scenarios happen. For anyone to march around acting like this is a pink rave where decision making is good and life and death is a happy escapade is truly psychopathic.

Being forced to construct, build, create a child from a few living cells. The lungs, blood vessels, heart, brain of a fetus are built from the blood and tissues of the woman. Women don't "carry" fetuses. Women's bodies supply all that the fetus needs, and sometimes depletes the woman's body of necessary nutrients for her own mental and physical health. A spontaneous abortion in utero (in a woman's uterus) gets rid of imperfection during that process...and occurs frequently, and naturally.

I am against the federal or state tax dollars funding abortion.
If women are so empowered, why do they fail to use contraception if they don't want to be with child... gotta be smarter than a fifth grader.

Contraception is not 100%. Recent story in the news said many women seeking abortions were using contraception at the time of pregnancy. I know you would like it to be a simple problem, but almost nothing is.

The vast majority are actually executed before week 10.

Sydney, that is complete bull. Who are your sources - Fox News or the Christian Diocese (the latter of which promotes molestation of *GASP* children!) Late term abortions account for 0.01% of all abortions performed in this country. The vast majority are actually performed before Week 10. You are an excellent little sheep.

The limit in Colorado is 26 with exceptions for "the health of the mother."

However, you can walk in at 28 weeks and say my husband left me, I'm stressed, and that counts as an exception for the health of the mother.

I've looked into this, and had my mind CHANGED. I used to be pro-choice, until I actually looked into it.

ABC109, that was the finest response I've read in a long time!

Sydney - Week 26? What? Please take five minutes to google some *actual* stats and information. Your ignorance is concerning.

Here's a thought, boys: If you are against abortion, WRAP IT UP, get snipped, do your part. Unless you're saying that a woman is solely responsible for what happens to her body. Oh, wait...

It happens to the smartest of women. It happens ON contraception. It's not as simple as that, and you cannot label a massive group of people "stupid" because they happen to be so unfortunate as to get pregnant when it is not wanted. Freedom for ALL women ALL the time, to do whatever they want with their reproductive health choices.

Many pregnancies occur when people are using contraception. No method is 100% failsafe. In that case, what do you recommend?

The pro-abortion rhetoric grosses me out. I'm not religious or anything, but after about 15 weeks it seems like straight up murder. No one is forcing you to get pregnant, they're asking that you don't murder babies.

So when the hell does a fetus become a baby?

I won't be showing up to a women's march until pro-baby killing stops being part of the platform.

Oh... and Sydney, pro-choice does not mean pro-abortion. But I wonder why pro-life doesn't mean desire to support that life and assist it in thriving in a healthy way after it is born.

Sydney, the easy answer, the one that is not clouded with mysticism and religious dogma is that a fetus becomes a baby when it can survive unassisted outside the mother's womb. So typically that is at birth. I mean, isn't that what "birth" means? The beginning of a new life? Trying to parse birth to mean conception or even the moment of the release of the seed is just rhetorical gymnastics.

This is an attack on my character without an actual argument. How is it not killing a baby? and why won't anyone answer this question: When does a fetus become a baby?

SydneyMViera, you gross me out. Pro-baby killing? It's simple minds like yours that make the world a dangerous place for women. Put on your big girl panties, get a little education, and grow up.

Strange with the pro abortion sign, how women’s rights equals aborting baby girls IN THE PICTURE with that sign. Yes I get it, it’s a broader issue! I’m not pro life here. But it just seems .... odd! Pro women and aborting a potential.... woman.

No one is pro-abortion!

Nobody is "pro-abortion." We're anti-being forced to carry a child.

Even more stayed away. That is the real news.

Would have loved to have seen