As of 8:00 a.m. Saturday morning, the Windmill fire is still at 110 acres and now 40% contained. Full containment is expected tomorrow (Sunday) morning at 8:00 a.m. 75 firefighters remain on scene. 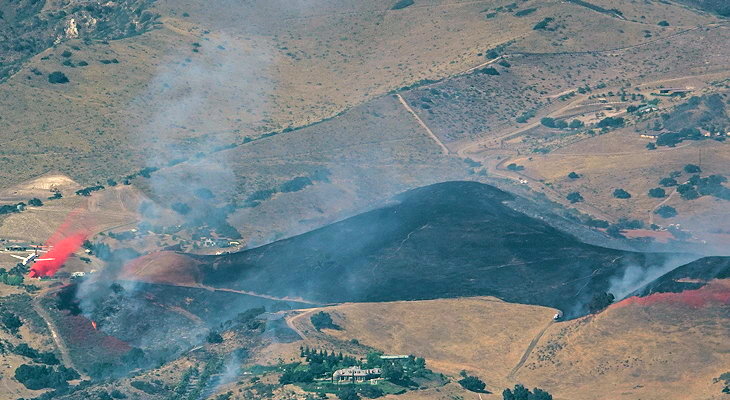 The Windmill Fire is now estimated to be 110 acres.

The fire is now 35% containment and the forward progress has stopped.

All evacuation warnings have been lifted, but Bobcat Springs Rd. is open to residents only.

The Windmill Fire is now burning at 100 acres near Buellton with a 20% containment, reports Captain Zaniboni as of 4:00 p.m. Friday.

The fire has a moderate rate of spread and is moving rather rapidly across the grassland.

There are no immediate structures threatened.

A 30-acre wildfire is burning in the 1000 block of SR-246 at a rapid speed which prompted an evacuation warning of the Bobcat Springs community.

At approximately 2:15 p.m. Friday, Santa Barbara County firefighters responded to the area just west of Buellton for a vegetation fire. A 2nd alarm was called as the fire is burning at a moderate rate of speed, said Fire Captain Dave Zaniboni.

An evacuation warning has been issued for residents living off Bobcat Springs Road.

The fire is burning in an easterly direction with a west wind, it's not in heavy vegetation but spreading rapidly, said Zaniboni.

Currently, there are two helicopters and two air tankers on the scene making water drops.

If it aien't one thing it's another.

Thanks for posting information...

People want to get their horses out ..

Santa Barbara County @countyofsb.28m28 minutes ago. We are monitoring the vegetation #WindmillFire of approximately 30 acres near 1000 block of Hwy 246, #Buellton. An evacuation warning was issued for nearby Bobcat Springs community. If you feel threatened, need time to evacuate or have large animals, don't wait for an Evac Order

Any word on how it started...?

We happened to be flying back from Lompoc an hour or two after it started, and got some pix. I sent pix of that & Windmill Fire to Ed earlier, so they might get published here tomorrow. Looks to me like we were *really* lucky with this one. It appears to have started fairly close to the outskirts of Buellton and the wind was blowing it in that direction, so quick response may have saved us. It was close enough to the Las Cruces burn area that some of the crews working there were able to join the fight very quickly. There were many air support resources available nearby and they hit it hard and fast. The wind at that Eastern edge was moderated some by the terrain, with a fairly big hill upwind. It was mostly grass, and may have been mowed. Sure is shaping up to be a scary Summer!

New SBitZ.NET fire aerial pix of both this Windmill Fire taken about 4pm 7/20 soon after it started, and of the Las Cruces Fire burn area, posted a few minutes ago.

John Wiley, agree about this summer being scary, and fall, and winter. Thomas Fire, December.

The way it's going, should we keep our suitcases packed & "valuables"--I took a watermelon with me last evacuation--by the door?

Woman Arrested for Brandishing a Gun on Castillo Street

And is she already back in

Holy Cow! Is nothing sacred?

Some history of Old Bossie

Not the first time the 'ol

Even if she took the vandals