Two suspects are in custody after allegedly tampering with a gas pump and attempting to attach a skimming device at a City of Goleta gas station. At about 4:45 p.m., yesterday June 23, 2018, a citizen near the Valero Gas station in the 5600 block of Calle Real reported to Sheriff’s Dispatch that two subjects were tampering with a gas pump and the attached credit card reader. The reporting party told dispatchers that the subjects were seen driving away in a U-Haul rental van that had the license plate removed, the U-Haul serial number covered with tape, and the side and rear windows covered with brown paper. That van was last seen entering the northbound freeway from the Fairview onramp.

A responding deputy located the van and conducted a traffic enforcement stop. The vehicle exited the freeway, continued for a short distance, and then yielded in a parking lot in the 6400 block of Calle Real. It was quickly determined that the two male suspects in the van were involved with tampering of the gas pump. Deputies ordered the suspects out of the van and two men were detained in the back of patrol cars. Because the deputies could not clearly see inside the cargo van, the rear windows were shattered out using a 40MM impact sponge round. The vehicle was then cleared and no other persons were found inside. While searching the vehicle, deputies located several pieces of equipment used for “Skimming” or illegally collecting data off the magnetic stripe on credit cards when used at payment terminals like those found on gas station pumps. 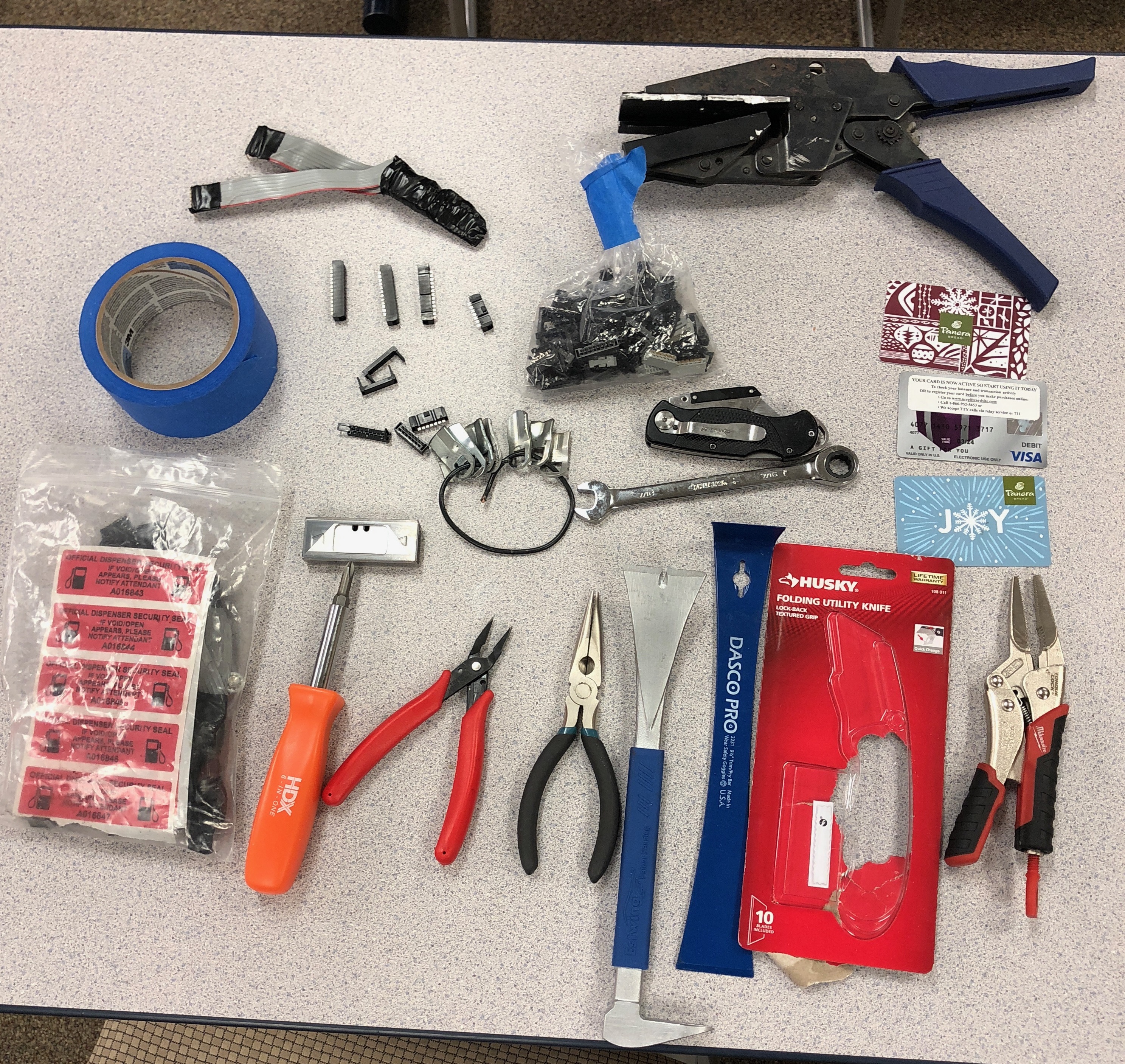 Witnesses called 911 before 5:00 p.m. reporting two men in a U-Haul van at the Valero gas stations on Calle Real in Goleta. Santa Barbara Sheriff's Deputies found the U-Haul traveling north on Highway 101. The van was missing a license plate and its windows were covered. The driver refused to yield, exited the freeway, and finally pulled over in the parking lot of the 6400 block of Calle Real, reports KEYT News.

An edhat reader reported the occupants inside the van were being held at gunpoint by Deputies.

KEYT further reports 24-year-old, Harutyun Shahinyan of Los Angeles and 30-year-old, Carlos Lemus of Port Orchard, Washington were arrested and are being held without bail after deputies found several pieces of equipment used for “skimming” or illegally collecting data off the magnetic stripe on credit cards.

At least 10 police/highway patrol cars. Road shut down. Police with guns pointed at a Uhaul van in the industrial park on the corner. It’s right behind Captain Fatty’s. We were headed for a beer, but the police wouldn’t let us in.

So much crap that goes on in this town that we never hear about. Gotta keep the tourists blissfull...

Tourists already are not happy in this town. Complaints right and left. And telling their friends to stay away too.

That is true in any area that relies on tourism. Even in 'Paradise'... Hawaii!

you will NEVER hear any of the crime that happens in SB on KEYT "News" (which is a joke). It's the worst newscast of local information EVER>

First of all this happened in Goleta and KEYT even had a video. But you haters gotta hate so enjoy yourselves. I've seen all the major crimes reported there. So since Roger said this was not major I guess they go the extra mile to keep us informed. Guess the round the clock coverage they had of the Montecito disaster shouldn't have been shown cuz it might deter tourism. Funny how they have won more awards than any other local station.

Tourists get away with murder in this town no pun intended, much.

Where it true. The more that stay away the better this place will be.

A disaster is alot different those are harder to hide than an isolated case of violence like when the woman was burned to death in the junkyard in November of 2011 that wasn't even investigated her things were simply thrown away like the thrown away person she was treated as when she was alive. Little was said about the case of Ross Stiles who was hit over the head with a bottle and robbed of his sleeping bag on East Beach that was being investigated as a possible murder when the chief of police said it wasn't of course if the robbery and 245 Assault would not have happened Ross Stiles would most likely be alive today. Then there was the homeless man beaten to death by several football players, and found outside the IV Clinic his name was Gregory Ghan. The man found burned to death on the Northbound at Milpas Onramp in a sleeping bag, another man found beaten to death in the 400 Block of North Milpas, A female found dead on Castillo street near the railroad bridge topless....Some people around here consider the Homeless as Non People and suspicious homeless deaths as Natural Causes these deaths have occurred within the time I have reported for Edhat there was another on Santa Barbara street behind a church I'm sure there are acouple others swept under the rug..Maybe things will be different now..It's not about being a hater it's about solving crimes and helping to get criminals off the streets. There are alot of other crimes that have never made the news either through the years the public needs to be informed so they can protect themselves through the years some crimes have been reported but not all. Using a Disaster as an example for hiding news is weird a disaster cannot be hidden as far as winning awards I never been about Bright Lights and Big City like some people are I have turned down interviews, and all that other bull manure some people that is all they are in it for...Thanks for the put down I always enjoy seeing a persons true colors.

A friend had it posted on his site it was a felony stop with a failure to yield I heard the call but since it did not turn into a pursuit it did not sound that serious.

Full article in Noozhawk this morning . . .

Do they know if the devises were installed in any of the local stations?

I have been through the card skimming scam and it is no fun.
I decided then the only way to be safe is to pay inside.
I would bet there were plenty installed in the same area.
Though the person caught sung like a Canary so hopefully they
toId the Police where the others were installed.
So glad they have all their equipment too.

Let's hope that these guys aren't back on the street anytime soon.

Police OVERKILL? Ugh. I am sick of seeing two, three, even FOUR police vehicles pulling over a normal looking citizen. Also, WHY do the firetrucks have to come out to calls? Seems like a tremendous waste of taxpayer money to me.

BUT, having said that, I am also happy to see the cops catch credit card skimmer thieves. I just doubt that they needed all those guns.

Maybe the police know something about these types of criminals that you don't. They may be "normal looking citizens" to you but you're clearly not in possession of all the facts. Better that it takes 4 cars to take down an unknown number of criminals and no gets hurt than the alternative, don't you think?

Fire response is required because the human body starts to suffer brain damage after 4 minutes. Stations are typically laid out for an under 5 minute response but of course this no longer always possible. They also carry rescue tools to facilitate entering a locked premise. AMR can and usually does take longer and if entering or extricating is needed there is of course an added delay if fire had to wait to be dispatched. In San Roque being home most of the day I can guarantee you fire is on the scene more than 90% of the time and AMR can be from a few to over ten minutes later when busy or out of position.

Please excuse my ignorance but can some kind ventern EdHat member
explain the DownVote function, its history and why it still exists?

Feel free to email us at ed@edhat.com and we'd be happy to answer your question.
-ed staff

I'm so glad the downvote function exists. Some comments really deserve a down vote!

Where does "never hear about crime in SB because of tourism" come from? It all gets reported, just not paying attention if you miss it.

It does not all get reported I heard several suspicious deaths over the years never saw anything about them in the news or on the tv news, Homeless people mostly. One time I read an article in Vanity Fair about a guy found dead in a West Beach motel room the coroner said it was suicide but the suicide was overkill wrists cut, throat cut...Then over the years heard about things tourists get away with did small time as a night manager in a motel all kinds of crap goes on in this town overnight. Not all of it is reported much of it never make it to a news room or even over the scanner nowadays since people have become citizen reporters...

I love how when someone has got nothing else, they start name calling; such as “haters”...

What I said was "Since it did not turn into a pursuit I did not sound that serious." But feel free to say I said something else... Gee miss a story here and there no one works 24/7 KEYT Has a huge staff they are real journalists they have interns I have me...Don't like me read someone else I do my best.

Bravo to the keen eyed observer AND the guts to call it in. Bravo and thank you!

101st reason to drive an ELECTRIC car!! I don't miss gas stations a bit, haven't been to one in years.

I suppose U-Haul has insurance to cover the damage done to its vehicle. Or are the repair charges passed on to the "alleged" criminals and somehow collected? Just curious.