On September 7, 2020 at 4:56 P.M. the Santa Barbara Police Department received a 911 call reporting an armed robbery that had just occurred at a gas station in the 3800 Block of State Street.

Officers arrived within minutes and interviewed the reporting party as well as several witnesses. Officers quickly gleaned a description of a get-away vehicle, distinctive features of the culprit, and the last known direction of travel. That information was broadcast back to responding Officers and other allied agencies. 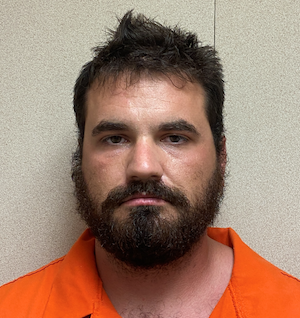 A responding Santa Barbara Police Officer that was heading northbound on 101 scanned southbound traffic and spotted a vehicle of interest matching the description provided by witnesses. That Officer was able to take an offramp and immediately re-enter southbound 101 in an effort to catch up with the suspect vehicle.

Southbound traffic was heavy due to Labor Day revelers returning home -- making it easier for Officers to converge on the suspect vehicle. With the help of CHP, Santa Barbara Police Officers conducted a felony stop and immediately brought the suspect into custody without incident.

The alleged armed robber, now identified as Russell Bradley Wallace, a 29-year-old Ventura resident, was found with multiple pieces of evidence linking him back to the robbery.

Recovered from the vehicle were a loaded handgun, an AR15 assault rifle, numerous loaded magazines, along with an armored vest and ballistic helmet.

i SURE HOPE THEY DO NOT LET HIM GO ON COVID RELESE!

Did he go in with a vest and helmet and guns? Looks like he was armed for battle! Wonder what his plans were.... good job cops!

What a moron, armed to the teeth to steal from a cash register. It's too bad law enforcement didn't put the mugshot of the guy caught taking $3.5 million from investors or the $700 million Ponzi schemer from Camarillo. Instead those guys get an all-expense paid trip to Club Fed and an offshore slush account when they get out. Crime pays when the government is full of criminals.

I always reckoned the mobile station was up to more than just gasoline... to pay the rent! Don't forget it is a Rockefeller operation....
Don't forget one of ed hats great stories had a business next door behind Chuck's, the
dude rapped the whole family in plastic rap. wonder what happened to Dr. Han's case, that got memory holed royal!

hey, you could find out if you searched for news about the case. I believe the jailed suspect's name is spelled "Haubsh." No, it's "HAOBSH."
Care to back up your other assertions?

Did you mean the Mobil station off Storke? Everyone says that.

Google is a wonderful thing, you should learn how to use it... https://www.noozhawk.com/article/triple_murder_suspect_pierre_haobsh_in_court_20200729

Anyone know how far he got/where this went down?

According to Noozhawk: "With the assistance of the California Highway Patrol, a high-risk traffic stop was made on the freeway near Hot Springs Road, and Russell Bradley Wallace, 29, was arrested, Payne said."

Does it seem like you have seen this guy before? This guy just kinda has that "look"

Comments like this are why Black people get the cops called on them, and they end up getting shot.... "Yes officer, but I'm sure it was him that I saw before. He just has that thug "look", ya know?"

Just something to think about....

Damn good police work! Nice job. Hat's off to our fine law enforcers! Keep these scum OFF the streets!

Mommie and Daddie must be so proud of the scumbag they raised...

Actually he was down to two 2 out of three 30 round AR 15 magazines empty and one of the 2 extended clip 9 mil clips.

There are no "clips" in the photos. All are magazines.

When the police are defunded morons like this will rule.

SoCalGas from time to time do