The Sheriff's Office announced Camarillo Sanchez was arrested by detectives in the 1000-block of Olive Street in San Luis Obispo around 10:30 pm Monday.

Booking charges, bail, and additional information are expected to be shared Tuesday, according to the Sheriff's Office.

The following statement was posted by the Santa Barbara County Sheriff's Office:

Sheriff’s detectives have arrested an inmate who escaped from the Main Jail, and two accomplices who assisted him following the escape. On Sunday, March 27, 2022 at approximately 7:00 p.m., 23-year-old Joshua Camarillo-Sanchez from Santa Maria, escaped from the Santa Barbara County Main Jail.  Camarillo-Sanchez was arrested by Santa Maria Police on January 9, 2021 and was being held on $1,370,000 bail for charges including domestic violence (felony), assault with a deadly weapon (felony), threatening a crime with intent to terrorize (felony), and assault with force likely to cause great bodily injury (felony).

The Main Jail was placed on lockdown while patrol deputies, and a Sheriff’s K9 unit responded to the area to search for Camarillo-Sanchez. The Sheriff’s Office used social media accounts to alert the public and share Camarillo-Sanchez’s booking photo along with a request that witnesses call 911 if they saw him. Sheriff’s detectives were assigned and worked with Custody staff to quickly identify a probable accomplice in Camarillo-Sanchez’s escape, 24-year-old Angelli Mariah Roman from Santa Maria. Detectives learned that Camarillo-Sanchez planned his escape with Roman, who waited near the Main Jail in a getaway vehicle.

On Monday, March 28, 2022, at approximately 9:41 p.m., detectives tracked Roman to the Santa Maria area where she was arrested during a traffic stop near the intersection of Lincoln Street and Orchard Street for outstanding warrants, as well as charges for conspiracy (felony), accessory (felony), and aiding in the escape of a prisoner (felony). Detectives also arrested a passenger in Roman’s vehicle, 24-year-old Janelle Dantane Hodges from Santa Maria for being an accessory (felony). Both subjects were booked at the Main Jail. Roman is being held on $15,000 bail and Hodges was release without bail pursuant to the local court’s extension of Emergency Rule 4.

Detectives then tracked Camarillo-Sanchez to a motel in the 1000-block of Olive Street in San Luis Obispo. Detectives authored a search warrant for Camarillo-Sanchez that was served at approximately 10:33 p.m. at the motel, where he was arrested without further incident. Camarillo-Sanchez was booked at the Main Jail for his original charges, with new charges added including escape from jail (felony), conspiracy (felony) and violation of a court order (misdemeanor). He is being held on $1,390,000 bail.

The Sheriff's Office is searching for an inmate who escaped from the County Main Jail on Sunday evening.

The public is asked to call 911 if he's spotted 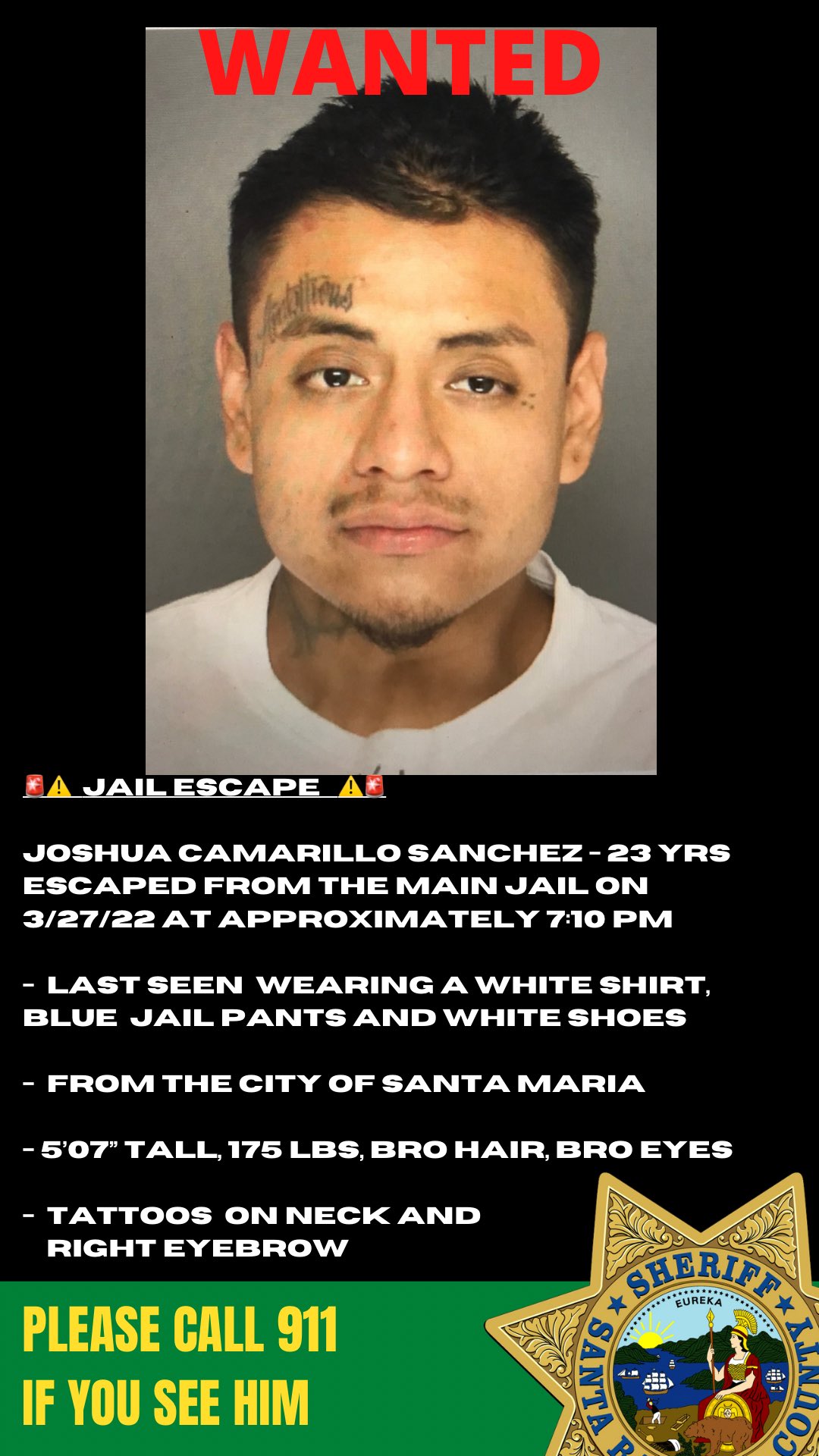 They took him back to the main jail even though the new N County Jail was close by. I guess they wanted to make him face his jailers (again).

So the passenger in the car of the person who helped him escape the day before is an accessory? Be interesting to learn the facts here. Sounds like the SBSO is just arresting anyone now to try and make up for the what is looking like a pretty big screw up.

One has to note that this was almost the best write-up by SBSO, that almost provides complete information. Nice "Update" way to go!

So the press release from the Sheriff says how he and his accomplices were arrested but there is ZERO information on how exactly he escaped. What's the deal? Was a Deputy in on it? Was it an oversight? Error? Will there be punishments to the deputies who were not doing their job? And how exactly did he escape... walk out the front door? More information please!

Looks like Josh and his tattoos were captured last night (Monday) in SLO. Now he'll be our guest for a bit more time.

If your chosen path in life is be a criminal, it seems to reason that one shouldn't broadcast it. That's why so many pschopathic whilte collars criminals do so well: They go out of their way to appear to be like those they intend to swindle.

Stupid people do stupid things. This guy is a poster child for that. Someday he is likely to wind up dead at someones hands.

If he can ahold of some opaque matching makeup or wears a ball cap pulled low and and a turtleneck or shirt with the collar up, he might make it for a while.

This guy is scary. Check out the amount his bail is. How was he not watched closer? https://calcoasttimes.com/2022/03/28/inmate-escapes-from-santa-barbara-county-main-jail/

My thought exactly. If this guy's bail is over $1 million, he must be a bad dude. Sheriff Brown has a lot of explaining to do. How did this guy get away and what is being done to ensure that this doesn't happen again?

Because everyone deserves a second chance right? Or the opportunity at rehabilitation!! At least that’s what these geniuses running these facilities will make you try and believe. LMAO

Wonder how he escaped.

More tax dollars wasted on this 23 year old who continues his self destruction at our cost.

CHICO - who are you talking to? Money is of course important here. There are those who insist we incarcerate more people for longer times, but don't want their tax dollars paying for it. That's the problem. Holding people in jail costs $$.

If money is what you think is important in this conversation,no wonder you have such a short sighted view on other things.
According to you we should let the lunatics run the asylum.

If money is what you think is important in this conversation,no wonder you have such a short sighted view on other things.
According to you we should let the lunatics run the asylum.

COAST - adults debate, it's kind of a thing. I just asked what you propose since you are complaining about taxes. It costs money to incarcerate people. I'm not saying anything about politics here, just entirely curious what you propose we do that would not require tax dollars. You complained we were spending money on him. OK, so what's the alternative? Let prisoners go? Shoot them on site?

Your solution seems to be to put them to work. OK, great idea and I fully support that. BUT.......... housing them/feeding them/having cops oversee and supervise them.... all costs tax $$$.

My whole point, not surprisingly missed entirely, is that it's a little hard to complain about tax dollars being used on criminals, while at the same time demanding they be imprisoned longer. See what I mean?

@SACJON- What is the point of engaging you on this forum? We both have different POV on every topic. Honestly, these "career criminals" (more than two convictions) need to be put to WORK - Whether that is weed abatement, re tarring and surfacing our crumbling roads or any other menial labor the State can think of... Jail needs to be changed from Gangsta University to never wanting to go back. From 3 "hots" to bologna sandwiches and oatmeal. You being a card-carrying liberal, you can't see it- Perhaps one day you will be a crime victim and see things differently.

COAST - lol, you didn't even come close to answering my question, just insults and deflection. Typical. Here though, try again. What do you propose we do with criminals so your precious tax dollars aren't being used? Let them run free? Try to actually answer the question.

COAST - what tax dollars? He's not in jail anymore. Are you upset any tax dollars are being used to re-capture him? Should we just let him run free? I don't get it. You always complain about people being released from jail, and then complain about your tax dollars being spent on them?

Too bad he wasn't being held in the new N County jail. Probably needed to be in SB for Court or something.

How does one escape from jail lol

Apparently it’s a secret probably because it’s embarrassing, like walking out the front door or something.

In broad daylight, no less!

With that tattoo he won't be too hard to find

I think you should express

your new to the internet,

why is it a haven for people