The first two honorees were Sonia Aguila and Shanna Hargett. On October 20, 2021, Carpinteria patrol deputies responded to a report of a vehicle verses pedestrian traffic accident at the intersection of Linden Avenue and Malibu Drive, across from Canalino School. The school had recently let out, so there was an increased amount of pedestrian and vehicular traffic in the area. The first deputy to arrive on scene found a chaotic scene with a large crowd standing near a female who was lying on the ground. While the deputy was assessing the scene, he noticed that a community member, Aguila, was directing traffic, sending traffic around the scene and onto Malibu Drive. Aguila remained on scene, until she was relieved by first responders. Deputies later discovered that Aguila had just picked up her child from Carpinteria High School, encountered the accident and instead of going home, stopped and did what she could to help.

The second citizen that stepped up during this call was Shanna Hargett. When deputies arrived, Hargett was by the patient’s side, providing care. Deputies later learned that Hargett had called 911 and assisted the call taker with providing information needed by first responders. Most importantly, Hargett provided comfort, reassurance and first aid to the patient who was not only injured but was also scared and worried about her four dogs that she had been walking immediately prior to the accident. (All the dogs were recovered, and one was taken to the veterinarian for minor injuries) Both Sonia Aguila and Shanna Hargett went out of their way, taking extra steps, not only helping first responders, but coming to the aid of a fellow community member in their time of in need.

The third honoree was John Ornelas, an onsite property manager for an apartment complex located in the 100-block of Orange Avenue in Goleta. On Tuesday, November 09, 2021, Ornelas was home when he was notified of a fire in one of the apartments. Ornelas ran to the apartment and found it filled with smoke. He was familiar with the resident and knew she was home and recently had surgery. Ornelas tried to enter the apartment, but the smoke was too thick, and he could see flames inside. Ornelas called out for the resident, and she called back confirming his belief she was inside. Ornelas then ran back downstairs, obtained a fire extinguisher, gave it to another citizen who arrived to assist, and ran to call 911 for help.  When Ornelas returned, he took the extinguisher back, and tried to know down the flames as the apartment continued to fill with thick smoke. As emergency responders arrived in the area, Ornelas could hear the sirens approaching. Ornelas ran to street and direct Deputies Ashley and Ellis to the fire. As Deputy Ashley crawled into the apartment to assist the resident, Ornelas crawled with him. Together, Ornelas and Deputies Ashley and Ellis were able to drag the victim out of the apartment and to the street where she was transported to the hospital with serious injuries. 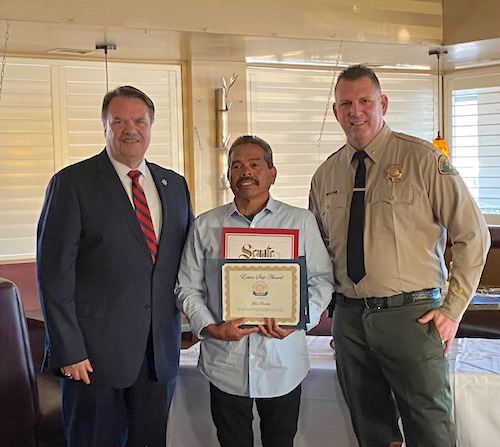 The fourth honoree was Yew Lamoutte. On February 25, 2021, at 1:30 PM Lamoutte was in the Goleta Marketplace shopping center parking lot when he saw a 5’10” tall, 215-pound male, physically fighting with the lone female Home Depot Loss Prevention officer who was attempting to recover a shopping cart full of stolen items from the man. During this struggle, the suspect violently threw the loss prevention officer around the parking lot, while also slamming the cart into her body.  Lamoutte ran towards the confrontation with the intent of helping the loss prevention officer as the suspect broke free and began to flee with the cart of stolen goods. Lamoutte chased after the suspect, caught up to him and confronted him. The suspect then removed a stolen hatchet from the cart and threatened Lamoutte with it. Undaunted, Lamoutte physically engaged the suspect, disarmed him and held the suspect until deputies arrived and took custody of him. A subsequent search of the suspect’s van revealed a large quantity of illegal drugs and plethora of additional stolen items from various stores. The suspect was booked for many charges including robbery and threatening Lamoutte with the hatchet. Lamoutte’s family attended the ceremony and received the award on his behalf. 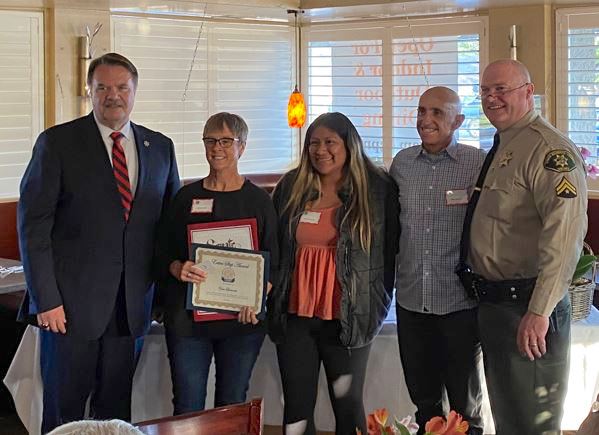 The Sheriff’s Office would like to thank each of the honorees for going above and beyond in helping our communities and our deputies. We would also like to thank the Kiwanis Club of Santa Barbara for hosting this event and their continued community support.

This is just down the street

Who is crying about being

MANY THANKS for the astronomy

Zero - I understand you have