Fourteen female students and five faculty members from Santa Barbara City College were among approximately 18,000 technology professionals from around the world who attended the 2017 Grace Hopper Celebration of Women in Computing Conference in Orlando, Florida October 4 – 6.

The Grace Hopper Celebration (GHC) was founded in 1994 with the goal of inspiring and connecting women in technology from leading academic institutions and Fortune 500 companies. It is now the world’s largest annual gathering of women technologists.

For three days the young women from SBCC attended talks by keynote speakers, participated in learning workshops, had the opportunity to talk with recruiters and submit their resumes at the career fair, all the while networking with other students and working professionals.

“It is inspiring to be able to see successful, intelligent, very cool women in computer science. It helps me feel like I can make my dreams a reality” said Michelle Sandstrom. That sentiment was echoed by several other students when they spoke of their experience afterward. They were in agreement that being a woman in the still male-dominated field of computer science and technology can feel lonely and isolating at times. “The Grace Hopper Conference showed us there is a whole community out there, there’s a place for us,” noted Selah Argent.

Hearing the stories of the keynote speakers and the obstacles they encountered earlier in their careers served as motivation for the students to persevere toward their goals. “Sometimes I still struggle with math and think maybe this isn’t for me,” commented Olivia Mora. “But these role models convinced me that with hard work and dedication I can succeed,” she continued.

The conference also provided students with a glimpse into the latest technological advances in such areas as cyber security, artificial intelligence and robotics. The SBCC contingent wasn’t on the receiving end of learning in every case, however. Michelle Sandstrom and Selah Argent demonstrated their work on wearable technology to university students and professionals from Microsoft, Twitter and Dell.

When asked if attending the conference had influenced their plans for the future, the students were unanimous: absolutely. Selah Argent reported, “Before attending GHC in 2016 I was unsure if I’d be able to find a job in tech. Going to the conference inspired me to stick with it, and now I’ll be interning at a company that has a $9.5 billion annual tech budget and is working with cutting edge technology.”

The trip to Florida and conference attendance would not have been possible without student enthusiasm, faculty support and grant funding according to Mathematics Professor Bronwen Moore. Ongoing support of that kind is necessary to ensure that SBCC can continue to attend year after year.

When asked “How would you sum up the Grace Hopper Celebration experience?” student response came back, “Life changing.” 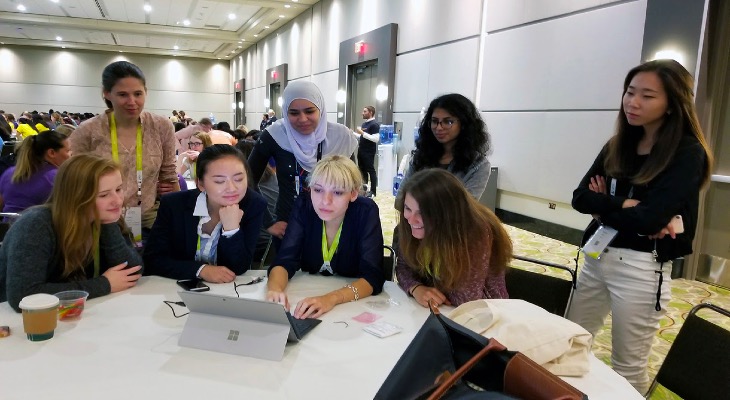 Newsom (right after he

I had no problems checking 2

Yeah? But don't you think

Oil is already a gift of

Santa Barbara voters back in

What would you suggest as an