On June 30, 2022, at about 10:18 pm, SMPD officers were dispatched to the 600 block of S. Pine St. regarding subjects fighting in the street. When officers arrived, they determined there had been an attempted robbery of a person.

Officers began checking the area, in search of the suspects, when they contacted several male subjects in an alleyway. One of the subjects was found to be on parole. Officers investigated further, conducted a search, and located multiple firearms, illegal firearm manufacturing equipment, a large amount of illegal fireworks and fentanyl pills, as well as a large amount of cash.

The parolee, Marvin Dennis Sanchez-Vizarretea (20 yrs.), of Santa Maria was booked into the Santa Barbara County Northern Branch Jail for multiple felony violations. Due to the severity of the violations, Sanchez’s bail was set at NO BAIL.

This case and any relation to the initial report of a robbery attempt is still under investigation. 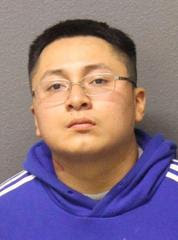 Ridiculous. Another waste of