On 07-10-2021, at approximately 2318 hours, a pedestrian was struck and killed while crossing the street in the 500 block of N. Broadway. The pedestrian was crossing from east to west when he was struck by a southbound vehicle. As a result of the force of the impact, the pedestrian was thrown into the number 1 northbound lane of traffic where he was then struck by two additional northbound vehicles while he was down on the ground. All three involved vehicles fled the scene prior to police arrival.

On 07-14-2021, After an investigation officers with the Santa Maria Police Department Traffic Bureau made an arrest in connection with this case. Alfonso Vazquez Gomez, age 34, of Santa Maria was arrested and charged with felony hit and run resulting in injury/death to a person and driving on a suspended license for a prior DUI. Gomez was the driver of the first vehicle that initially struck the pedestrian. He was booked into Santa Barbara County Jail. 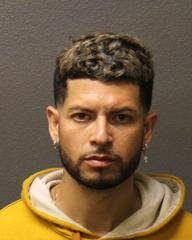 The two additional vehicles are still outstanding. They are described as a small, single cab white pickup truck and a dark colored pickup truck with a large tool box in the bed. Both these trucks fled northbound on Broadway. There were also several witnesses to the collision who did not stay on the scene and have not come forward since.

The SMPD Traffic Bureau is requesting and potential witnesses or anyone with information about this collision to please contact Officer Marques at (805)-928-3781 x1333 or if not available, contact the SMPD Traffic Office.

Really a sad state of affairs. Cops caught the main culprit, who was suspended and had prior DUI, but two others fled, along with the witnesses. Were the drivers who fled-even though they did not cause the accident- also DUI? or unlicensed? Pretty bad when it seems the majority of people in a given area don't care at all about such an event or the victim. This is not the Santa Maria I knew 30 years ago.

Thank you for suggesting this

A citizen reported the

It was a vehicle rollover, 1

Goleta draws a lot of