Santa Barbara Airport (SBA) has been acknowledged with prestigious service awards from two major airline carriers. United Airlines announced Santa Barbara’s “depart differently” airport as one of three winners of the 2017 Quality First Award, for earning the highest points in its respective tier for combine performance across a variety of service markers. “Congratulations to SBA on this exceptional achievement. Your commitment to our customers and United’s overall operational successes is greatly appreciated,” United Airlines Operation leadership team.

“These honors mean a lot to our airport and our carrier teams,” stated Hazel Johns, airport director. “This has been a busy year for SBA as we have increased passenger loads by 8% while navigating the natural disasters that have affected our entire region. We are proud that we have been able to keep customer service up-front and center.” 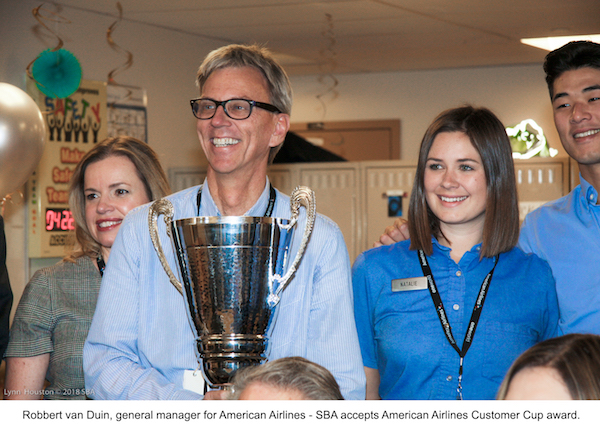 Great for them, but sadly I almost never fly out of SB anymore, too expensive compared to flying out of Burbank or LAX (even factoring in the extra travel and hassle).

Interestingly enough my sister-in-law get really affordable tickets from Sea-Tac to SB. Cheaper than flying into LA and then the added expense of coming up on the air bus.

Why was this downvoted? If you don't like the poster, SAY SO

I usually flew for pleasure, planned ahead. No early a.m., cheap tickets due to buying ahead of time. So nice to do. Nothing like flying for work or emergencies.

I usually went to Oregon, free vacation housing from friends and family. Ah, the pacific northwest were it still rains.

Ha ha ha! Took 3 minutes for my asking why the downvote to be donvoted! Yeah, Edhat may not be the place to hang out anymore.

I agree with Flicka that when you factor in the hassle, time & money for gas, hotel/parking & getting to & from LAX, even $100 each way is well worth the hassle! What's your time on the clogged 405 & 101 worth? Then there's the hotel stay to score the "free" parking at LAX and o' dark thirty shuttle to the terminal after a toss & turen night of "sleep? It's no contest when you do the math!

So many times the flights are cancelled from SBA in the early mornings. I have taken a taxi to the airport from Carp. Then you need to scramble a way to LAX. Guess what? Rental companies aren’t open that early. The last time this happened to us we hired a limo who was dropping off some other travelers. It was just about the same as the taxi drivers were charging as we were stuck. I will never again schedule an early am flight from SBA.

What excuses did they give you for the early morning flight cancellations? I kept getting fog and/or not enough crew turn-around time. Has any of that changed with the new airport? Between too much lost luggage and the last minute cancellations or flight diversions to other airports, using SBA has not been a happy experience. I want it to work; but it hasn't been a reliable option for serious travel. Only use it when I have the time to compensate for the predictable SBA hang-ups. Please tell me I am wrong. Please. I want a good local airport.

Congratulations to the people. They are truly hard working humans with good hearts who deserve recognition.
Yet it's still pretty funny that Santa Barbara spent $63 million for a human hamster wheel.
Ever notice they have you walk in this sarcophagus on the echoing ground floor just to go up and escalator? You then immediately get questioned, frisked, and identified by no less than 72 randomly dispersed governmental Touch Search & Assault agents(TSA). Frazzled, you then have to gather your things and walk incoherently barefoot down the corridor to sit for a rest as you put your shoes on. When your flight is called 30 minutes late? You're then asked to walk down a stairwell, back to the ground floor, just to walk on to the tarmac where you get to admire the monstrosity behind you. It's fun!

SBA did not lose my luggage, both coming and going, last time. Things must be improving.

Of course they have... just

Tons of kids are back in

Was that once part of the

What are you actually

But a large part of the